What is it about Ian Bell that doesn't find worthy mention in tributes but meets unmatched respect? 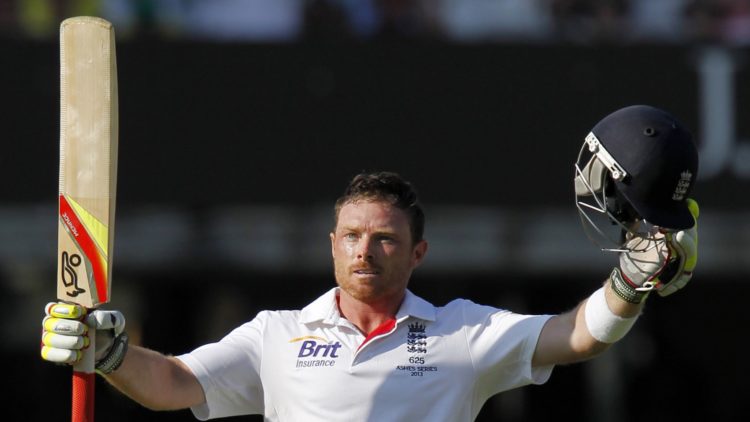 Have you scrolled through Bell's Test accumulation against Australia, India? Well, you must (Sky Sports)

Not all heroes wear capes. Some simply wield a cricket bat with a sense of simplicity. Not everyone chooses to make loud noises indicating the zestiness one finds in the superhero figures on today’s big screens. Some simply opt for modesty, eschewing loudness in their love for restraint.

From 2004 to 2015, England, the iconic stars of the contemporary era had in their ranks a simple albeit passionate, a duty-bound albeit charismatic hero.

The Decade Of A Hero

Of the many gifts that this powerhouse of cricket found during that decade wherein Cook’s form peaked in Tests, where there was no less than a holy trinity in the form of Strauss, Collingwood, and Pietersen, the availability of majestic spin and pace talent in Swann, Harmison, and Panesar, nothing could ever appear as rare as the presence of a dogged figure in the batting order.

You may have got Cook early. You may have done as well as removing Flintoff and Pietersen cheaply.

But for as long as the rock of England’s middle-order stayed on the crease, no contest to England’s challengers ever seemed over, let alone a one-sided narrative. For there was an infallible sense of security that followed Ian Bell walking out to the middle.

He was not just another batsman; he was a marathon runner of sorts. In an age where Test Cricket hadn’t yet fallen victim to the overload of T20Is, he was the preserver of the dignity of the long format.

To this day, his numbers are as exciting as the circumstances they came in; 7727 Test runs at an average of 42, including 22 centuries, along with 5400 ODI runs, including 35 fifties at an average touching 38.

And 1,983 of those runs came battling the giant oppressors of English cricket in the most taxing format: the Ashes.

If there’s ever a litmus test to gauge a talent’s true measure then perhaps nothing can be accredited greater value than an Englishman contributing handsomely toward winning 5 Ashes series in 7 separate appearances.

Nothing can or should be extended greater respect than scoring heavily against an Australian bowling attack that featured blistering cannons, akin to Johnson, Starc, and Lyon.

When Ian Bell contributed 331 runs in the 2006 Ashes, it was just a normal outing for the batsman.

But when he went on to build what had insofar been an average Ashes record, striking 329 from just 5 games with 1 century (at an average of 65) during the 2010 series, following it up with 562 in 5 Tests during the 2013 series, scoring 3 centuries (at an average of 62), he was showing the world that Australia had run into an immovable object, one that would take the life out of its battery of pace bowling.

Two simple events, both of which resulted in a memorable win for England proved the lordship of one of Cricket’s calmest minds, a batsman who exerted might with a sense of quiet.

Ryan Harris rushes in and bowls a nearly faultless delivery pitched on the up around the off. The ball is guided to the cover boundary in the gentlest of fashions.

If you are Dilip Vengsarkar or David Gower- you couldn’t be prouder. But if you are any cricket fan who loves the art of timing, then Ian Bell is your master. He would star with a gutsy 68 starring in an innings victory for his team

On a quick wicket assisting the bowlers, England are set a somewhat tricky 120. Reads like a comic book. But the fun is lost when Starc sends Alastair Cook flying. 1 down for 11.

Anything can happen knowing England’s penchant at making the easy look complicated.

Out goes Australia’s hopes, in front of what turns out to be a very dogged, defiant 65 off just 90. An 8 wicket win comes at the back of silvery strokes, and not to mention the feathery cover drives, ethereal as one can imagine.

If you are a conscientious coach, you’d tell your pupil long before Kohli or Babar even personified the right way to craft the cover drive, Ian Bell was owning it, of course, sans any arrogance whatsoever.

Surely, Bell was the David who boasted of a Goliath-sized appetite for runs. He was the batsman who didn’t just score runs when most needed but scored lots against top-notch attacks of that time.

In Ian Bell, England had a mild-mannered bloke who funnily didn’t look the part of the warrior he became when nearly every time the red ball challenged the might of the wood or to put to simply, England’s authority in the very game they invented.

So in some ways, it appears a bit of a travesty of justice that the very sport, which by nature is quick to impart love and loathing hasn’t yet held a serious debate about a man who played a key part in England’s reckoning.

And therefore, it’s both alarming and absurd in equal measure that while we appear ever ready to dispense verdict and offer rulings on the God’s and Prince’s of the game, we appear strangely mum when Ian Bell’s name pops up in a discussion.

This is if it at all that happens for we are yet to ask ourselves a serious question.

Have we, in our urge to attest the term ‘greatness’ to nearly every dashing hero who appears but often withers away like a puff of wind, this being an era where histrionics often overrule quaintness, held ever so less for the quiet ones?

You know, the ones who’ll never really care for an utter lack of recognition.

For if that’s true and must we be as honest as we were in shedding a tear for New Zealand who went down fighting a sublime England in the finals of the CWC, 2019, then it must be said, we mustn’t be proud.

Because in Ian Bell we had a man who contested 205 times for England wearing the whites and contributed nearly 7,800 runs whilst emerging unbeaten on 24 of those occasions.

Now if you were to delve deep you’d marvel at some jewels that perhaps beckon our attention that rests puzzlingly elsewhere when a glorious tale rests here.

On greater examination, you’d know that while Ian Bell took only 181 innings to score those many runs, in 68 of those opportunities, he either fired a fifty or a ton.

Beyond The Realm Of Stats

If cricketers are recognized purely for statistical accumulation then surely Ian Bell’s returns warrant greater appreciation than they get simply because not even once in nearly half a decade upon his debut (August 2004) did he manage an average of under 40 in Test cricket.

And just when you begin to narrow the reach of this hungry scorer, along comes his ODI returns widening the Ian Bell conundrum even more.

Implicit in his 5,400 plus ODI runs are the 2,300 plus runs that came against two premier outfits in the limited-over game.

Against Australia, he’d fire 1148 from just 29 innings while he’d reserve a few more for the team he came to haunt answering back Dravid’s lone vigil, with a hefty reply, circa 2011-12.

The very team against whom Ian Bell darted 1,163 ODI runs from just 31 outings would come to be bullied through his career-best 235, a knock that was sincere in its accumulation of runs yet evoked a lesson in one-upmanship.

2011’s Oval Test told us that despite being the team in command and the batsman in charge of essaying the game’s narrative, you could manage to hold the upper hand without appearing crass or crude.

Perhaps if there’s ever another quality for which Ian Bell must be hailed over and above those gifted with overpowering physicality or in possession of copious records books then it’s his ability to stay true to himself, of starring in an era where Cricket was steadily facing the Titanic-like iceberg, where the great inevitable question was just setting in like a hailstorm: could T20 cricket threaten Tests?

And against that narrative, that Bell made himself accountable for the changing vagaries of the game, striking 188 from just 8 innings also provided evidence that he could’ve made it far had he been contented with.

But in the end, nothing seems just in cricket. Quite like life, fairness is often the utopian idea. And hence, when he was not considered for the South Africa tour in 2015, despite offering 452 Test runs from 8 games, including a characteristically gritty 167 that year, Bell was left to fend for himself.

Then even repeated claims, “I want to play for England again,” became after some time, just appeals that fell on deaf ears, probably telling us that the game must and does move on, often with its special talents having so much more to give.

For that is the order of the day.

Maybe that’s Cricket’s way of telling us mortals that not everything will ever have a suitable or agreeable answer, that we matter till as long as its ordained.

But for as long as the glorious chapters of English cricket will be written, they’ll always seem incomplete without Ian Bell’s massive participation in their glory.