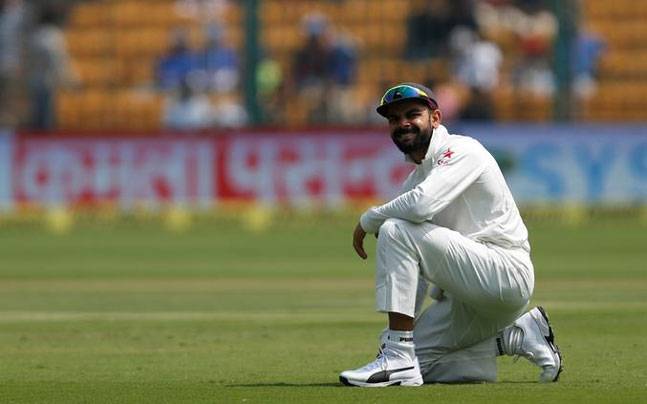 India is the number one Test side in the world and despite sitting atop, they know they have work to do in certain aspects if they want results overseas.

Virat Kohli-led side gave a good account of themselves against South Africa earlier this year, although certain mistakes made them fall short.

With the 5-match Test series against England starting from August 1, the Indian cricket team will be seeking a revival of sorts and learn from the happenings. Addressing key issues is the main task in a long summer ahead.

After the ODI series loss, it’s time the Test team stands up and takes charge from the word go. India will be determined on how they win the sessions and progress day by day. The idea will be to not repeat mistakes seen against South Africa.

Kohli will believe he has the side to do the job and stop England from gaining ascendancy. That’s where they will look to take inspiration from other nations that toured here of late. Here are the issues that Kohli needs his team to be wary of.

The key task for Murali Vijay and Cheteshwar Pujara will be to fend off the advances of England bowlers with the new ball and absorb the pressure. Vijay has to do what he does best- leave the ball outside the off-stump. It was missing against South Africa and low scores followed.

He managed just 102 runs in South Africa earlier this year. When one looks at his dismissals there was a pattern. He often looked to attack half-volleys and the cover-drives ended with him being caught behind. He was out chasing the ball thrice in that series. He tried cutting short balls that didn’t have much room and the result was similar.

What made Vijay stick and grind out runs in 2014, was being patient. He watched the ball like a hawk and had all the time in the world. Perhaps the century against Afghanistan and the fifty in the warm-up match against Essex will help him get back in setting the basics right.

Also Shikhar Dhawan’s form outside the subcontinent doesn’t read well. In the warm-up game he was dismissed for a pair and a question now looms that whether KL Rahul should be preferred over the southpaw? Rahul has looked commanding since he stepped his feet in UK and the runs have come that included a fifty against Essex. Kohli has a lot to chew upon in getting the call right.

Pujara, at number three, will need to tire down England bowlers. That’s his major task. The other batsmen to follow will then seek advantage facing the likes of James Anderson and Co. He played County cricket in England recently and is accustomed to the conditions knowing what to expect.

India can’t afford to drop catches in the slip cordon. That often results in misery.  Slip catching has been a cause of concern for the Indian skipper and that’s where Ajinkya Rahane comes to the fore. Against South Africa earlier, Indian slip fielders dropped aplenty in the first two Tests, which allowed the hosts to score important runs.

Kagiso Rabada was dropped off R Ashwin in the 2nd Test, with skipper Kohli missing a sitter. Then there was wicket-keeper Parthiv Patel, who too put down Faf du Plessis. In that Test, India dropped five catches in total and that accounted for the Proteas to score extra 87 runs.

Shikhar Dhawan too dropped Keshav Maharaj, who went on to add valuable runs (36) in the first Test.  The scenario changed in the final Test, and India made a comeback, but against England, they need to be on their toes, if they hope for a Test series win.

One feels India should go with three front-line pacers with Hardik Pandya being the fourth bowler. This will help keep balance amongst them and rotation will be key.

With Bhuvneshwar Kumar and Jasprit Bumrah injured, the three main pacers need to manage the workload well. The sharpness in bowling has somewhat disappeared with these injuries.

India needs to react quickly and that’s where the others need to step in. One question lies on whether Mohammed Shami can get the ooze of confidence he enjoyed against South Africa. He was terrific there and was responsible for India’s victory in the 3rd Test.

Since then the world turned upside down for him as things went awry both on and off the field. But this is his chance. His fitness could still be an issue and if can’t repeat the performance, then India has a back-up in Shardul Thakur. And he doesn’t quite be the factor England will worry about.

R Ashwin is likely to come in as the lone spinner and he should be given a prominent role as well. Even if Kuldeep Yadav is selected, then their work in tandem needs to be balanced.

Can India’s wicket-keeper get runs?

Wriddhiman Saha never quite scored the runs, expected out of a wicket-keeper batsman, in overseas conditions. An excellent keeper – Saha disappointed throughout with the bat.  Same goes for Parthiv Patel, who couldn’t cash in on the chances against the Proteas.

India have technically sound Dinesh Karthik, this time around. And the side needs him to come well. He got a valiant fifty in the warm-up game, but quality bowlers will await him at Edgbaston to start with. He has to score crucial runs in a position where India haven’t flourished.

Can he come in at number 6 and be resourceful? England have Jos Buttler, who does a stellar job and now it’s time DK shows his class.

Youngster Rishabh Pant is there too and is an able back-up if DK gets injured or fails to perform. Pant scored some good looking runs for India A recently in the UK.

After an excellent IPL 2018 campaign, the youngster will look to get a break in the Test side as soon as possible. Even if he fails to break this time, he knows, the day is not that far.