Home side Lyon showed classic composure throughout the game and survived a CR7 inspired comeback from Juventus to hang on and book a Quarterfinal spot against Manchester City. 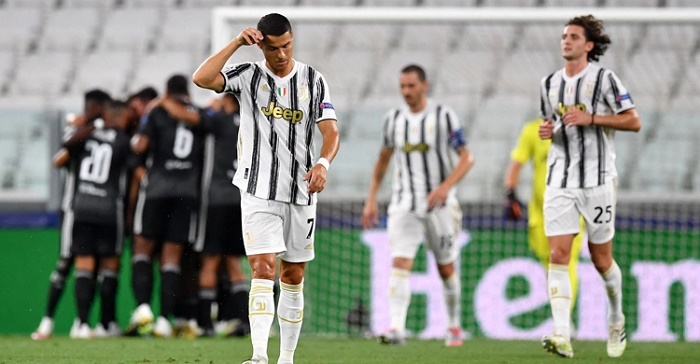 Startling as the fans know how abrupt this league is! Lyon side handed the Italian champions an exit ticket and progressed to the quarterfinals on away goals after a 2-2 draw on aggregate.

Like Juventus, Real Madrid didn’t do themselves any favours, trailing 2-1 after dropping the round of 16 opener to City at the Bernabeu.

Two of the best-known teams in global sports were sent packing from the UEFA Champions League as it returned to action for the first time since March.

Leading 1-0 from February’s first leg, the French side were handed a soft early penalty which the captain fiery Memphis Depay converted in style with a calm panenka that left Juve needing to score thrice to progress.

Depay was also the one who then conceded a penalty at the end of the first half after Miralem Pjanić’s free kick hit his arm.

And who else than the man made of only winning mindset- Cristiano Ronaldo- stepped in and got one back from the penalty spot.

He then thundered in his 130th Champions League goal but Lyon held on and finished the game with an away goal advantage to advance further in the competition.

Cristiano Ronaldo has now scored 67 goals in 81 games in the knockout stages of the Champions League.

Lyon boss Rudi Garcia, said: “We came up against an opponent who has an extraterrestrial in its squad,” of five-time Ballon d’Or winner Ronaldo.

“This is the victory of a group. We wanted to be in the final eight in Lisbon, we are there.

“We’ll still be outsiders and that suits us very well.”

Juventus manager Maurizio Sarri may have guided his side to a ninth straight Serie A title but they were lethargic throughout and his position could be under threat.

Juve have not won the Champions League since 1996 and the wait goes on at least another year.

It was also Pjanić’s last match for Juventus as the midfielder will move to Barcelona in a swap deal for Arthur.

However looking at this Lyon side, they were only seventh in the French top flight when the season was cancelled in April and this was just their second game back.

They held Paris St-Germain to a 0-0 draw in the French League Cup final last Friday night – losing on penalties – and were equally resolute in Turin.

Away record not inspiring

Despite progressing on away goals, Lyon are now winless in their last 11 away knockout matches in the Champions League (D2 L9).

They have definitely qualified but they did lose yesterday which is surely a big concern for Rudi Garcia side.

Lyon will face Manchester City in the single-elimination quarterfinals in Lisbon.

Man City-Lyon is slated for Aug. 14. The final, originally scheduled to take place in Istanbul, will be played Aug. 23.