New Zealand cricket team captain Kane Williamson has been backing adaptability over aggression while batting in the ongoing ICC World Cup 2019.
The right-handed batsman has looked in dangerous form and that has transpired the Kiwis, who are yet to lose a match so far in the 2019 World Cup.
Williamson has led the charge for his team and more importantly, it has been substance over style. There has been an urge to make things look simple as possible.
The classy Williamson has spent a lot of time at the crease and knows the conditions well. That has helped him pile on the runs at an alarming rate.
Williamson’s success in the 50-over format owes a lot to the English soil. He has mastered the art of batting in England and the statistics show the madness behind all the high numbers.
In the ongoing World Cup 2019, Williamson 40, 79*, 106* and 148. All of these scores have been match-winning contributions. That’s perhaps the biggest gain for New Zealand.
The Kiwi captain loves to adapt in various situations and his simplicity is what has stood tall for the 2015 World Cup finalists.
He shares a strong association with life in England where his success rate is enormous. So it was always going to be likely to see Williamson be among the leading run-scorers in the major event.
Here we look at Williamson’s love affair with English soil and how it has shaped up a dream World Cup for him and his team.

When you look at Williamson’s art of consistency on English soil, one word comes to the mind – Unbelievable! That’s what the numbers suggest.
The crafty Williamson has scored in an astounding fashion on English soil. He didn’t have a terrific start in his maiden event here in 2013 when he managed just two fifties across six innings. In 2015, the results improved.
In a five-match ODI series against England in 2015, Williamson amassed scores of 45, 93, 118, 90 and 50.
He scored 396 runs in five games at an average of 79.2. Four years later, he has continued in a similar manner. He already has 373 runs in four games at an average of 186.5.
Across nine innings since 2015 here, Williamson has three tons and four fifties in total. That’s absolute beauty from the commander of the Black Caps.
The batting has helped him be more confident and radical as an ODI skipper. That will help New Zealand going further into the tournament.
Williamson’s domination in England is matched by very few in the cricket world.

The ability to adapt makes Williamson stand out

Williamson has been known as someone who thrives in adapting to different game situations. In the match against South Africa, he hit a sublime four in the last ball of the 48th over.
Before that delivery, New Zealand needed 12 runs to win from seven balls (match was reduced to 49 overs a side).
Most batsmen would have tried to take the longer route and give the charge, but not Williamson. He just guided away past the man at short third for a four.
This is the adaptability that is being highlighted here. This is what makes Williamson stand out from rest of the pack. In the next over, he hit a six and a four to win the game for NZ.
Like MS Dhoni, the Kiwi international is a calm persona, who knows how to go about things while chasing.
Williamson went on to hit his highest individual score in ODIs in the next game against West Indies. This time it was his runs batting first that made the different for the side.
Williamson is a solid player that thrives on building partnerships. He also brings that calming effect on his partners on the other side.
He has all the attributes of text book stroke-play. He knows when to defend. He gets back like a rabbit when needing to fend off short balls. His drives are eloquent. Another special factor is his ability to rotate the strike.
He also uses the crease both forward and back to perfection. One might compare him to legends Jacques Kallis and Rahul Dravid in terms of this attribute.

Williamson making the most out of a special 2019 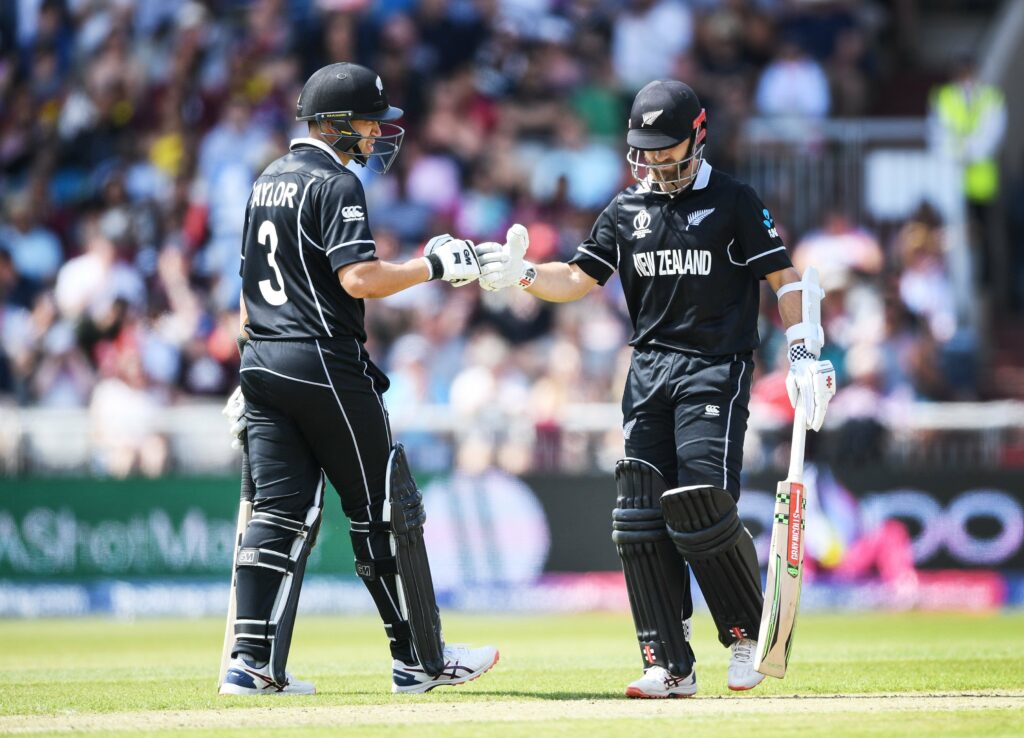 Williamson has been fantastic in 2019. He has played a major role in shaping the Kiwis in the 50-over format and the success story has followed the Black Caps.
The Kiwi star has amassed 743 runs in 15 ODI matches at an average of 67.54. The tally includes two hundreds and five fifties.
In the match against West Indies, he became only the third captain to hit successive tons in the World Cup. The NZ mainstay joined Australia’s Ricky Ponting and Zimbabwe’s Brendon Taylor to score back-to-back hundreds.
He also notched his fourth ton on English soil that helped him become the fourth batsman to notch 100-plus scores here. It helped him to draw level with Shikhar Dhawan, Rohit Sharma and Viv Richards.
Williamson has continued with his supremacy of stitching vital partnerships. Against South Africa, he made sure to stay alongside Colin de Grandhomme to forge a winning stand.
Then against WI, he was joined by experienced Ross Taylor as the two added 160 runs for the third wicket.
The form and panache for Williamson couldn’t have come at a better time.
New Zealand are a win away from booking a place in the semi-finals and thanks to their skipper that the possibility has raised. There are three crucial games in store for NZ and Williamson is the man that can take the Kiwis forward.
ALSO READ:

World Cup 2019: How Australia’s ‘Fab Four’ Are Dictating The Show?