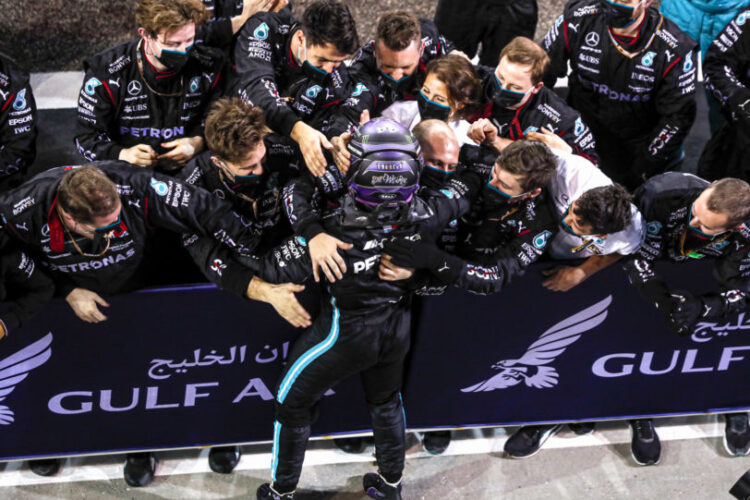 The 2021 Formula 1 season-opener was just the kind of ‘edge-of-the-seat entertainer that fans expect from a truly remarkable racing contest but have so often missed in this era of unprecedented Mercedes dominance. A truncated run with a lap lessened thanks to an unforeseen technical glitch with the Red Bull of Sergio Perez who began his contest from the pits, an early spin for the inexperienced albeit promising rookie Nikita Mazepin, and close battles right in the midst of an engaging desert run, the 2021 Bahrain GP unfurled constant action lap after lap, minute after minute.

And in the end, it was the perseverance of a mighty champion that paid off with Hamilton overcoming the threatening charge of a very irrepressible Max Verstappen.

The experienced king of racing Lewis Hamilton eventually bagged a contest that seemingly belonged to the dominant Red Bull pace, with Verstappen collecting his first back-to-back poles. And in the midst of a cracking Mercedes versus Red Bull run, the two cars separated in the final moments by only a few hundredths of a second, there were interesting storylines developing in the midfield.

So which moments truly shaped the 2021 Bahrain GP, let’s find out:

Upon the completion of the pre-season testing, when Sir Lewis Hamilton contended that Mercedes were no longer the fastest car in business and that the Red Bull looked threatening, there was a sense of unforeseen curiosity about the assessment. But all doubts regarding Mercedes’ form were smashed following a sensational race win by the man from Stevenage, United Kingdom.

In making the undercut work successfully against his key challenger this season, Lewis exerted early pressure on Verstappen at the 2021 Bahrain GP.

Implicit in Hamilton’s fifth triumph at the Sakhir was his ability to fend off the marauding charge of Max Verstappen’s Red Bull in the fighting moments, the duo separated by no more than seven tenths of a second towards the end.

A closely-fought contest that could truly have gone anyway saw Hamilton retake control of the race from the onset of lap 40 (with Max pitting) defending with all his might for sixteen nail-biting laps as Verstappen kept up the pressure and all but passed the seven-time world champion despite trying his possible best with the DRS assistance.

In making a stellar start to a brand new season, beginning with a mighty win, Hamilton, it could be said, is once again the go-to driver where this championship is concerned. The only question, however, is whether the likes of Max or Bottas can do something mighty to cause friction in the king’s path?

Honestly speaking, the 2021 Bahrain GP hardly looked the debut race for young Yuki Tusonda of Alpha Tauri. Driving with the calmness and maturity of a racer who leaves no challenge unattempted in extracting the maximum from his craft, Tusnoda first impressed in the qualifying bagging a respectable thirteenth on the grid.

Surely it wasn’t too bad for a first-timer, a driver born in the 21st century, ha?

Later on, Tsunoda was a man on a mission, looking to improve his chances having slipped initially further down the grid.

He’d soon get the hang of the Alpine of Esteban Ocon and would later pass Kimi Raikkonen, a driver double his age and experience.

The move on the ‘Iceman’ on the straights showed the superior race pace of the Alpha Tauri, the Alfa Romeo sticking up with no fight whatsoever.

However, the best moment for Tsunoda came right at the fag end of the 2021 Bahrain GP with the rookie driver sneaking up on the inside of Lance Stroll’s Aston Martin minutes before the checkered flag to collect a fantastic P9.

Knowing his penchant for a clean fight, it can be said one can expect more fireworks from the Alpha Tauri recruit.

A day of mixed fortunes for the experienced troika of Vettel, Alonso, and Raikkonen

The 2021 grid features some of the most promising names in the annals of Grand Prix racing given rookie driver Yuki Tsunoda,previously a Japanese F4 champion, Ferrari’s Charles Leclerc, the 99th driver to take pole position in the sport, the up and coming Pierre Gasly and clearly the man with marauding pace, Max Verstappen.

But then at the same time, the grid comprising of feisty racers with red hot pace also includes three titans of modern F1 racing, in the triumvirate of Sebastian Vettel, Kimi Raikkonen, and the returning Fernando Alonso.

But it was this massively experienced troika of Raikkonen, Vettel, and Alonso that endured a tough maiden race of the 2021 championship, with none finishing inside the points.

On his part, Vettel’s woes of a poor qualifying were further exacerbated as he was handed a five-place grid penalty right at the start meaning the German began the 2021 Bahrain GP from the back of the field.

Throughout the contest, he struggled for straight line speed, unlike his Canadian teammate who experienced a clean race and was able to finish inside points. Vettel would want to improve on his lacklustre P15, his debut drive for his new Aston Martin team.

On the other hand, Alonso, who shone brightly in qualifying bagging a decent P9 engaged himself in some interesting battles in the midfield pack, fighting along with the likes of Carlos Sainz and Lance Stroll at the midway stage.

But from the onset of lap 27 until 34, evidencing mounting problems with the brakes of his Alpine machine, the Spaniard had to limp back into the pits, a position from which he’d never recover. Although he mustered up a decent fight with the midfielders, it’s expected that the former double-world champion will contest keenly in the forthcoming duos.

This leaves us with Alfa Romeo’s Kimi Raikkonen, who with his P11 enjoyed the best-position among the experienced drivers in this famous troika.

While on the one hand, Kimi would feel the end result indicates a bit of an improvement over his lowly P14 in qualifying, he’d feel that the 2021 Bahrain GP was an opportunity lost to get off the mark especially since for the better part of the contest, the ‘Iceman’ was hanging on firmly to a tenth-place finish before a late move by Yuki Tsunoda challenged the Alfa for straight line speed.

Touted as the man that can clearly challenge the authority of multiple world champion Lewis Hamilton, Max Verstappen would surely have exited the 2021 Bahrain GP with mixed feelings.

A stormy pole wherein he beat the two Mercedes by nearly four-tenths of a second and a race-performance that nearly had everything in control, Verstappen emerged the valiant figure at Sakhir who went down fighting to the best man on the grid.

While a P2 shouldn’t exactly hurt, the flying Dutchman would know that in order to retake control of the championship, he’d need more on the strategy department instead of just demolishing race-pace if he’s to put up a strong fight to Lewis.

The McLarens right on the money

One of the most sought-after teams in the ongoing season, McLaren enjoyed a race with both drivers finishing comfortably inside the points. After a promising qualifying run, Riccardo and Norris beginning their 57-lap challenge from sixth and seventh on the grid, respectively, the two McLarens were immediately up to the task soon as the five red lights turned green.

It didn’t take long for Norris to launch ahead of his experienced teammate Daniel Riccardo, his McLaren positioned well inside the top five at the front even before the contest reached Lap 5.

Later on, Riccardo contested in key battles with the Ferrari of Carlos Sainz while Norris got the measure of Leclerc, both drivers showing enough pace to tackle the famous red cars.

A fighting P4 for Norris and an impressive P7 on his McLaren debut for Riccardo meant that the duo bagged 18 useful points from the season-opening 2021 Bahrain GP.

With a car that seems ready to take the fight to the Red Bulls and an overall package that any driver looking for sustained fights over the long run would so desire, it seems McLaren is the strongest midfielder this year.