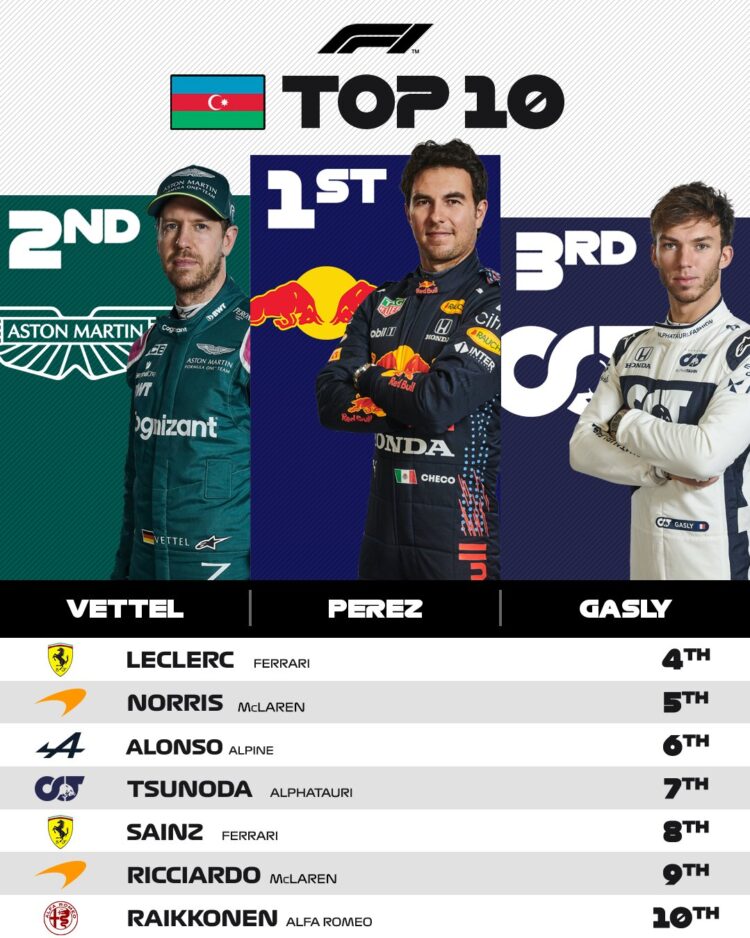 Come to Baku, they said, for all the thrills and it were thrills and a rather unexpected podium finish that checkered a contest emblazoned by 51 rollicking laps. A race that was red-flagged, incident-marred and offered a constant shake up of the contesting grid, one of the key talking points from the Azerbaijan Grand Prix was the devastatingly interesting ending the street course of Baku offered.

At halfway stage with the Bulls showing their might and Hamilton in hot pursuit of Max and Perez, with Leclerc already out of the podium places, our thoughts go out to anyone who may have switched off the TV or dozed off thinking the best part of the contest was over.

Real action began after the race was red flagged and when the safety car period ended with a sudden and unforeseeable shakedown spurring what had, until such time, been a fairly okay race into a hotly-contested one.

Flying overtakes, with Riccardo and Norris working their way up as Bottas suffered, Sainz fought back and the two Alfa Romeos showing pace, as the midfield tussles were evident, so was the fight for glory out in the front.

But which efforts, in particular, made headlines at Baku and thus became, the key talking points from the Azerbaijan GP?

A master in tire-management, Perez brought in all that handy experience into play by making most of teammate Max Verstappen’s crash, an incident that changed the entire complexion of the race with just 4 laps to go.

But was a win always on the cards?

Though, right at the start of the contest, perhaps just about nobody would’ve given the brave Mexican a chance to succeed. But as the fighting troika of Hamilton-Verstappen-Leclerc were embroiled in a key battle for the first twelve laps, Perez watched the proceedings closely never exerting tires on a circuit where in the end, we saw just how important it is to preserve the rubber.

He’d take the lead of the race when Max pitted and during the latter stages of the contest was taking half a second out of a charging Hamilton.

A win, in the end, though sudden and bright, was the result of Perez constantly keeping himself in the hunt. And soon as the Dutch teammate crashed out, it was all about the Mexican Tom Cruise’ Top Gun of a show. A well deserved win that brought up the experienced driver’s first- hopefully of the many- for the Milton Keynes outfit.

Following a fifth at Monaco, the exasperating but fashionable challenge that the German aced, finishing ahead of Lance Stroll, it was time for a bigger showing at the 2021 Azerbaijan Grand Prix and Vettel responded in clinical fashion scoring the first podium for the English team.

The beneficiary of a mega first stint, Sebastian Vettel put all that experience into tyre preservation-and stayed out- an art that many in the twenty-driver strong grid of Formula 1 are yet to ace.

His battles with Gasly and Tsunoda were remarkable and so evident of a driver keen to prove the fact that he still meant business, with four world titles long behind him.

But one of the key talking points from the Azerbaijan GP was the constant pace that Sebastian Vettel demonstrated, whether one talks of the main straights or the testing corners.

Upon the restart, post the red-flagging of the race, Vettel, who started from third would pounce onto second, soon as Hamilton flayed straight on, instead of moving fluidly with the pack into the sharp-left hander.

And from that point on, he would hold his nerve to collect a fighting second.

Raikkonen, with no points whatsoever, entered Baku under immense pressure, perhaps aware that the man in control at Alfa Romeo wasn’t he- but much younger teammate Antonio Giovinazzi.

But in making up a nice couple of places, Raikkonen moved into twelfth early on into the race, inside the first three laps.

Post the mid-way stage, he’d pressure a struggling Bottas in the slowest part of the track and move himself up into tenth, with Giovinazzi following in closely on eleventh.

Though, at one stage, it did seem as though Raikkonen had enough pace in the hard tyre to pass Fernando Alonso’s much quicker Renault-powered Alpine.

But that didn’t happen.

With just two laps remaining, post the red-flag period, Kimi kept his cool and kept Antonio behind to finally open his account, but it was not until the sixth race of the season- albeit a much-needed respite from a period of sheer ordinariness from an extraordinary talent.

Kimi’s P10 was clearly among the talking points from the Azerbaijan GP.

The key question is- can Kimi continue to score going forward?

Heartbreak for Max and Charles

Max Verstappen entered the 2021 Azerbaijan GP with a 5 point lead over Lewis Hamilton. He was to have maintained the lead and enjoy an out and out Red Bull showing at the twisty turns of Baku. And in benefitting from a rather slow stop that Lewis endured, though at the behest of Gasly’s entry in to the pits, Verstappen retook the lead, having already passed the Ferrari of Leclerc very early on.

But it was an unprecedented left rear tyre burst that hampered Verstappen’s race, the Dutchman having controlled the proceedings with familiar might.

Lap 47, though, would see an unfortunate end to Max’s hopes of winning the contest, which was always in his bag. From that point on, it was all upto Perez, Vettel, and Gasly.

Rare error from the king of racing- Lewis Hamilton

Lewis Hamilton held the record for scoring points in each of the last 54 races he’d entered, prior to arriving at Baku. But who could tell that this amazingly consistent spree would come to an end where Hamilton’s already won at the past.

Having demonstrated great pace in his assertive Mercedes, Hamilton first passed the Ferrari of Leclerc in a matter of 3 laps right at the start.

He was controlling the race well, though in hot pursuit of the two Red Bulls.

That being said, a shocker of an incident happened on Lap 50, which showed the fact that even the greats can make errors with Lewis, under heavy braking pushing straight on when he was to have turned left, having been second on the grid. Easily, the most important among several talking points from the Azerbaijan Grand Prix.