Kyle Jamieson is a thorough cricketer, a quiet talent with the makings to go the long way for NZ! How's that? 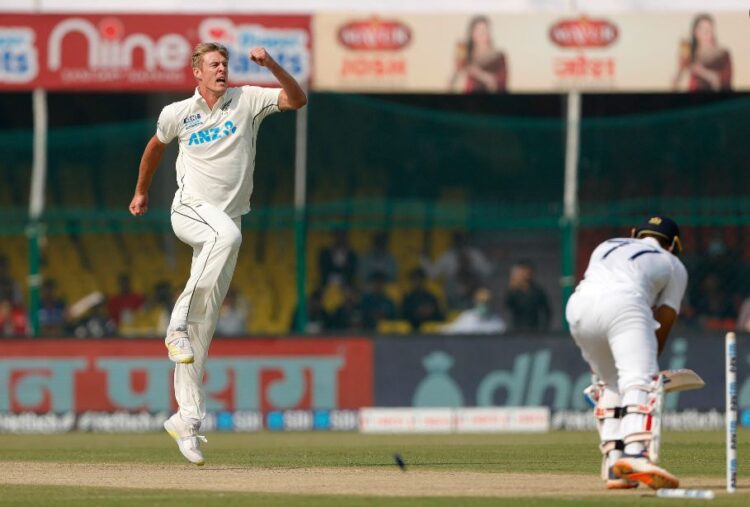 In cricket, everything about how a player looks or appears; the look and feel, and dare one say, even the talk about his potential, is cliche.

That’s down to the fact that what matters, as one notes, are performances at the end of the day. It’s performances basis which they select you and not basis your appearance or how you seem.

And where that stands, then it can be gathered, Kyle Jamieson is less hype and more wired in the realm of performances.

Make no mistake, his batting, given his credentials in the New Zealand side are that of an all-rounder, still needs some tweaks. Still needs work.

Under 300 runs from 10 innings aren’t Shane Watson-esque numbers or stats that would even impress a Colin de Grandhomme or Neesham.

The dead bat defence exists in his armory, but never came any good at Kanpur’s recent Test, when his team needed it the most, when Rachin Ravindra wanted it the most from the other end.

The 5 he made from as many overs could have, should have gone the long way. That’s not to discount his hard-fought 23 off 75 an inning earlier.

One hopes that the right hander will take note.

But where his bowling stands, then Kyle Jamieson has proven himself truly worth the potential that he was lauded for. The potential and praises he has already collected in a brief a journey that’s growing each day.

Kyle Jamieson has gone past fifty Test scalps in just his ninth Test for his country. That’s more than a single line of stat; it’s a statement. A bold one at that. One riddled with purpose and intent.

In the recently-concluded Kanpur Test, he removed the Indian top order and came hard at the middle order. On a pitch that may perhaps have always been done for the spinners, it was Jamieson who found assistance. But that’s at the back of trying and giving it everything.

In such circumstances, aware that the old guard of New Zealand seam-bowling, Tim Southee would have liked some company, one man chipped in.

The 6″8 giant whose performances from the contest were much like one!

He ended up picking six wickets from the game. His victims were often rattled by bounce and when not, then found flirting with the edge of the wood.

This compelled one of the true greats of the New Zealand game in Sir Ian Smith to explain, “It’s much thanks to Kyle Jamieson and Tim Southee that they (Kiwis) are still in the game.”

That Kyle Jamieson, disappointed upon being caught plumb in front would have thrown the bat in disgust inside the green room would be perhaps over-imagining or over-analysing things. But that the same Kyle Jamieson is likely to visit Williamson later on and perhaps exchange a few notes with the legend Ross Taylor is very likely.

He’s that sort of cricketer. Young and hungry. Quiet but sans the shenanigans most new age cricketers bring to the middle, who who think of themselves as being warlords.

With a long and rhythmic run up to the crease, it can be seen easily that the lanky contestant tries to extract bounce and likes doing so.

It’s not just the built but the will to contest with it that makes Jamieson who is still, very much, a great prospect and largely, a “work in progress.”

Yet, at the same time, he’s an indication that this “potentially great” New Zealand project will not be abandoned at the back of one or two failures or a couple of bad series should they arrive at some point.

That the man driving the project, Jamieson himself, will be keen to get the best out of himself.

But what he’d so like to do is to get some runs under his belt come Mumbai. For in doing so, and putting together a good whack with the bat, much like how he treated India when they visited the Kiwiland (Pre-COVID times), will be more like it.

On to the next on, Kyle! Keep soldiering on!