Leeds United are back in the Premier League after 16 years and many are expecting Marcelo Bielsa's side to surprise a few teams in the top tier next season. 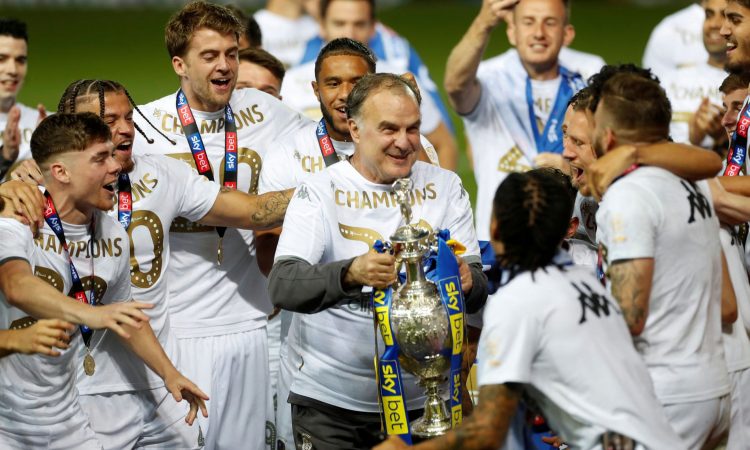 Leeds United are backing themselves to take the Premier League by storm next season. (Image Credits: Twitter)

The 16-year wait to play in the Premier League will end for Leeds United on Saturday when they take on champions Liverpool at Anfield. Leeds have had to wait far too long for this moment but they are here now and have a few things to prove as a club who still consider themselves as one of the big boys of English football.

16 years is an eternity in football. The last time Leeds United were in the Premier League, Liverpool were without a league title for 14 years, Arsenal just won the league by not losing a single game and looked set for an era of domination, Manchester City narrowly avoided relegation from the top tier and Jose Mourinho was winning the Champions League at Porto.

Leeds have been revived under Marcelo Bielsa and he is aptly named ‘El Loco’ as only a crazy genius could have taken an equally eccentric club out of their stasis.

Since winning promotion, Leeds United have made it clear that they are in the Premier League to thrive and not just survive. They have a manager who is adored by the best coaches in the world and a style of play that would suit the Premier League.

But many good teams have found the step up from the Championship to the Premier League a level too high. But there is a feeling that the Leeds side are more than capable of holding their own in the top tier. An away game at Liverpool is the appropriate test for Leeds’ capabilities on the first day of the season.

Leeds will definitely be one of the best-coached teams in the Premier League next season and will surprise many with their forward-thinking style of football.

Rodrigo – Leeds splashed out a club-record fee of £27m to snap up the 29-year-old striker from Valencia this summer. The Yorkshire giants wanted a forward to compete with Patrick Bamford upfront and the club are hopeful that in Rodrigo, they have signed proven quality who is good enough to thrive in the Premier League.

Robin Koch – Ben White’s departure meant Leeds wanted at least one centre-back in the market. Their priority was to sign Ben White on a permanent deal from Brighton but the Seagulls rejected two bids from Leeds. The Yorkshire giants turned their attention towards Germany international Robin Koch and signed him from SC Freiburg for a fee of €13m.

Illan Meslier – Leeds signed the young French goalkeeper from FC Lorient on loan last season and he was expected to be the understudy to Kiko Casilla. But the Spaniard’s suspension meant that Illan Meslier was thrown into the spotlight for the final third of the season.

He proved his mettle and kept seven clean sheets in ten Championship games and helped the club to earn promotion. Leeds wasted little time in taking up the option on him and signed him on a permanent contract.

Helder Costa – Leeds also signed the winger on a permanent deal after he spent the last season at Elland Road on loan from Wolves. Helder Costa scored four times and registered six assists and played 43 times in the Championship for Leeds last season.

Jack Harrison – Leeds United managed to convince Manchester United to loan out Jack Harrison to them for one more season. The winger was an integral part of Marcelo Bielsa’s plans and will get his first taste of Premier League football next season.

Joe Gelhardt – The Yorkshire giants beat off competition from several clubs to sign the highly-rated 18-year-old striker from cash-strapped Wigan. It remains to be seen whether he gets a look-in from Marcelo Bielsa during the course of the 2020-21 season.

Cody Drameh – Leeds also snared the teenage right-back from fellow promoted side Fulham. Cody Drameh had other options as well but the youngster believed he would be given more of an opportunity in the first team at Leeds. The Whites see in him the long term successor to Luke Ayling.

Leeds United are in the market for players and have tabled a €22m offer for Dinamo Zagreb’s 18-year-old defender Josko Gvardiol. The Yorkshire giants are also believed to be in the talks with Udinese for midfielder Rodrigo De Paul.

Jean-Kevin Augustin – Leeds signed the striker on loan from RB Leipzig in January with an obligation to buy if they got promoted for a fee of €21m. The forward did little to convince Marcelo Bielsa and he was returned to Leipzig even before the season ended.

The German club believe that Leeds are bound to sign him as per their agreement. But the Whites are trying to wriggle out of the situation. Leeds are in no mood to have him back at Elland Road next season.

Ben White – The centre-back impressed everyone during his loan spell at Leeds United last season and was their number one target this summer. But Brighton refused to sell the defender and rejected multiple bids from Leeds United. The Whites signed Robin Koch instead and White is now expected to sign a new contract at Brighton.

Leeds are open to offers to sell or loan out Jay-Roy Grot who returned from a loan spell in the Netherlands last season. The Whites are also expected to loan out a few of their youngsters but no major departures are expected as Marcelo Bielsa wants to keep the squad that won him promotion intact.

Leeds United’s strength is in their dugout in the form of their manager Marcelo Bielsa. The Argentine took charge of a side who had another disappointment bottom half finish in the Championship in 2018.

While other managers would have looked to overhaul their squad, the Argentinian believed in his work on the training pitch and went about his job of improving the players he inherited and just made a few key additions.

Bielsa turned Liam Cooper, who was termed ‘League One Liam’, into one of the best centre-backs in the Championship. A box-to-box midfielder in Kalvin Phillips was transformed into a thinking man’s holding midfielder and he made his debut for England this week.

Mateusz Klich’s time at Leeds looked over in 2018 but an impressive pre-season meant that the Pole started 90 back-to-back league games for the Whites over two seasons. An ageing Pablo Hernandez was rejuvenated to provide the creative impetus.

Luke Ayling, Gianni Alioski, Gaetano Berardi, and Stuart Dallas – were all part of Leeds before Bielsa arrived and were the core of the side that won promotion.

Leeds United have spent big this summer and will spend more in the squad before next month’s deadline, but the club will back Bielsa to take the current squad to the next level through his elite coaching in the training ground.

The majority of the players who will start against Liverpool on Saturday have little to no experience of playing in the Premier League. Some of them have spent their entire careers in the Championship and lower leagues and are inexperienced at this level.

While the arrivals of Rodrigo and Robin Koch have added some experience of top-level football to the Leeds squad, for most of them, the experience will be completely new when they take the pitch on Anfield.

While promoted sides work on adding Premier League experienced players to their squad, Leeds are looking at the foreign market and not necessarily in the top flight of English football for top talents

The Yorkshire giants are banking on Marcelo Bielsa to flog the squad into shape for the Premier League but for the moment, the top tier remains an unknown environment for a majority of the Leeds players.

Pablo Hernandez has been arguably Leeds’ most influential player under Marcelo Bielsa in the last two years. The Spaniard has proved the team’s creative attacking midfield catalyst, helping turn draws into wins and a few defeats into points.

However, Hernandez turned 35 in April and his advancing years mean that at times, his influence may come from the bench when he will be expected to come on and change the game. But Leeds United will need his vision, creativity and precision next season if they are to thrive in the top flight.