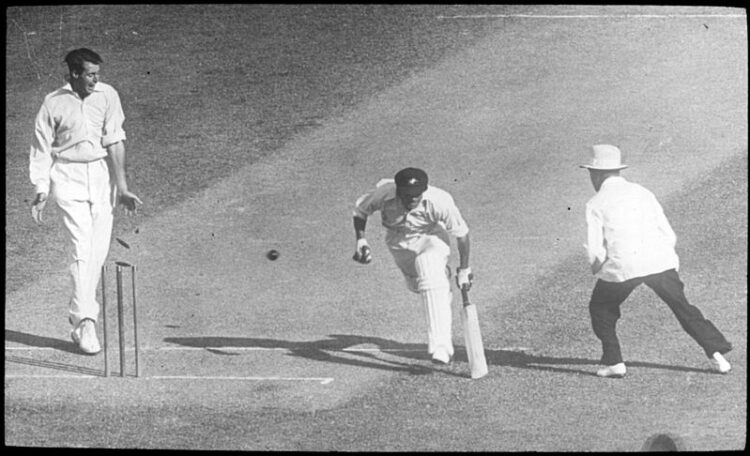 The advent of T20 cricket was considered by many to be the death knell of the traditional test cricket and its spirit.

However, not many of the arguments raised during its inception have stood the test of time. Nevertheless, one seldom comes across articles that blame T20 cricket for a nation’s despicable performance in an international test series, but more often than not, these opinion pieces suffer from an inherent misunderstanding of the concepts of causation and correlation. However, it is not the case that the modern format of the game has had no impact on the holiest one.

Out of the many changes that it brought with it, the latest one and perhaps an inadvertent one has been the oversimplification of the game with a tendency to evade responsibility.

A recent illustration of this could be found in the 2021 England Tour of India where England lost the test Series by 3-1 and then conveniently thrusted all responsibility upon the supposed spin-friendly pitches prepared by India. Such oversimplification, I argue, leads to the teams not taking responsibility for their deteriorating test preparations and performance and consequently, shift the blame on pitches, pink-ball behavior, monsoon season, slow outfields, and what not.

Allowing the teams to get away with such pathetic excuses has two outcomes. Firstly, it allows the teams and their management to seek solace in the fact that it was not their lack of preparation and absent technique that cost them the series but some externalities that they can label as ‘uncontrollable’. Secondly and more importantly, it attacks and defeats the spirit of not just ‘Test Cricket’ but that of “Cricket” Itself.

Cricket, has for decades now been synonymous to various virtues that a gentleman possesses. At the very core of its spirit and tenet, lies not the hammering in slog overs or chasing of a mammoth total, but an exuberant display of Temperament, Character, Persistence, Dedication, Patience, Class, Adaptability, Commitment, Improvisation, Perseverance, Implementation and above all, the ability to outwit your opponent through an effective Strategy and your ability to improve, improvise, adapt and reorient the strategy when required.

A classic example of such strategy making and an undying flame of competitiveness with an adamant refusal of giving up was the 3rd Test match of the Ashes Series of 1937. England was touring Australia for this 5 match Ashes Test series and it also happened to be the first test series of Sir Don Bradman as the Captain of the Australian test side.

England had won the first two test matches at the Gabba and the Sydney Cricket Ground with huge margins. An absolute test series defeat was on the cards for the Australians as no team had ever managed to win a series after being 2-0 down.

These were the days of 8-ball overs and Timeless tests i.e. the test matches would eventually have to result in either side’s defeat as there was no limitation as to the number of days after which the game will stop or be declared a draw. The quality of protection gears available to the batsmen was abysmal vis-vis the modern standards and there was no equipment available to the ground staff to even cover up the pitch in case it rains.

In the background of these conditions, the 3rd Test Match started on Jan 1, 1937. Sir Bradman won the toss and elected to bat first, a decision that he was soon going to regret as the Australian side was reduced to 181-6 by the end of day 1.

Sir Bradman himself, had scored just 13 runs. Soon after the start of day 2, Australia were 200-9. Sir Bradman realized that the pitch was getting worse after each delivery and in this backdrop of deteriorating wicket, he decided to declare the innings. As surprising as the move appeared, it paid off its dividends. The English batsman lost 9 wickets on a meagre score of 76 runs.

The English captain, not wanting to play further on this pitch, took Sir Bradman’s route and declared his innings on 76 itself.

This became the first time when both the teams had to declare in the first innings itself. Although the Australians now had a lead of 124 runs, their troubles were far from being finished, as now they had to bat on a pitch that was completely wet (due to intermitted rains).

This was not going to an easy task as the collapse of the English team had just indicated. Day 2 was not yet over and the Australian batsman had to come out to bat and the Australian captain knew that this was going to be the worst batting track of his career.

At this juncture, Sir Don Bradman came up with a unique and never seen before strategy. It was the time in test cricket that when after two days of play, the teams would be granted the 3rd day off as a break to rest and recover their strength before resuming play.

Sir Bradman figured that if somehow, they did not lose wickets on the wet pitch of day 2, the rest/gap day between day 2 and 3 would allow the pitch to become dry and more suitable for scoring runs.

However, the suitable pitch would be of no use if there were no proper batsman left to take advantage of it because of a collapse on day 2 itself.

Therefore, to avoid such a collapse and save his batsmen for day 3, he came up with a strategy that is till date regarded as one of the bravest and boldest in cricketing history. It was latter part of day 2 and the Australian team was required to negotiate around 30 minutes of batting.

Sir Bradman thought a lot and sent his batsmen to open the innings. The English crowd erupted in laughter when they saw the Australian batsmen coming to open the because instead of sending the openers to bat, Sir Bradman had completely reversed the batting order and sent his no. 11 and no. 9 batsmen to open the innings. Now they had to play for half an hour on a pitch that would engulf the most seasoned batsmen in a few deliveries.

The analysis of what the English team and fans considered to be a Herculean mistake by Bradman was almost instantaneously validated when one of the openers was dismissed on his very first delivery.

However, Sir Bradman kept faith in his plan and instead of panicking and sending a top order batsman, he sent the no. 10 batsman at no. 3. His plan ultimately worked as the pair negotiated the days play. Subsequently, the sun played its part on the rest day and dried up the pitch.

However, when the game resumed at day 3, the pitch was not as eased out as expected and Australia was reduced to 97-5. Interestingly, this was not something that Sir Bradman had not anticipated. His analysis of the pitch was excellent and he figured that it would be best for the team if he went in to bat not at no. 3 (his usual position) but late at no. 7.

The English were as surprised as the Australians were on his decision to bat so low down the order. However, Sir Bradman had something else on his mind. He batted throughout day 3 and 4 and went on to make a mammoth 270 with a soaring strike rate of 72.0.

This is still the highest score that a batsman has made while playing at no. 7. After the days play, it was revealed the Sir Bradman was suffering from a severe influenza during the innings. His determination and commitment was such that even in that condition, he took Australia from 97-5 to a huge total of 564 runs. In response to this, the England team was bundled up for 323 runs and Australia won the 3rd test by 365 runs.

The Australians had won an impossible game and made a comeback in the series. The series now stood at 2-1 with 2 more games to go. The Australians gained massive confidence from stealing this victory from the deadly jaws of defeat and this was reflected in their subsequent performances where they defeated the England team in both the 4th and 5th test match and won the Ashes series 3-2. This still remains the record for the grandest comeback after being 2-0 down in the series. No team has till now been able to win a series after losing the first two games.

Perhaps in the age of high paced cricket, a relook to the age passed by would be considered a folly.

However, if one is to rediscover the true essence and spirt of the game, one must turn to such impeccable performance, dexterous thinking, ingenious strategy-making and its exemplary implementation. Compared to the pitch that Australia were batting on in 1937, it would appear laughably naïve for the England team to call the 2021 Indian pitches “unplayable” and “not suitable for batting”.

It was not that this excuse was not available to Sir Don Bradman in 1937, it’s just that he did not choose to use this as a shield because that would have been against the fighting spirit that Cricket stands for.

And it is perhaps in testing these virtues, that it teaches them. Therefore, for anyone to call himself a student of cricket, it is blasphemous to accept defeat because of testing conditions or adverse situations, because to be a student of cricket it much more than just knowing the methods and laws of it, it requires you to incorporate within yourself the spirit, ethics and tenets that cricket stands for.

The author is an Advocate at the Allahabad High Court, India. He takes keen interest in the intersection of Cricket, Philosophy and World Politics.