The purposeful march of Liverpool to retain the Premier League title continued with a 3-1 win over Arsenal on Monday night. 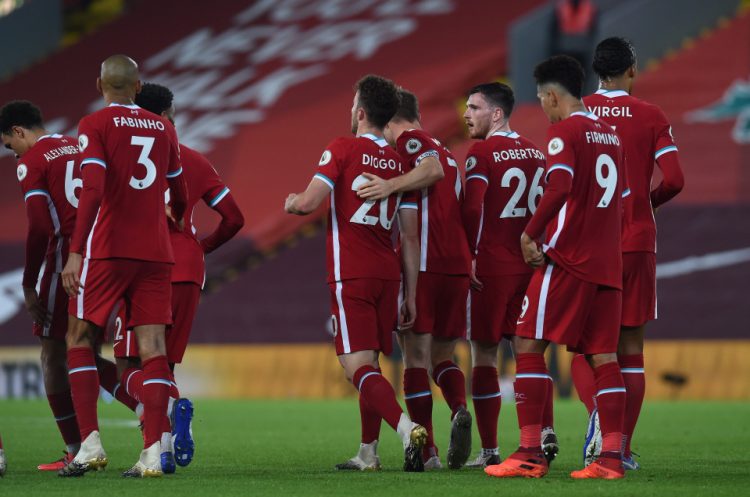 Who would know this better than Jurgen Klopp and his Liverpool team, who endorse the simple mantra of Come.Play.Conquer.Repeat, thus enthralling Kopites around the world and giving nightmares to all the other Premier League teams.

The purposeful march to attack the Premier League title and not just defend it, as Jurgen Klopp puts it, scaled another milestone, with the latest causality being Arsenal.

The Gunners, despite breaking the deadlock, could not surmount the Reds’ challenge at the fortress called Anfield, with the Merseyside club mounting a more than able comeback, that too without the services of captain consistent Jordan Henderson and the new midfield star Thiago Alcantara.

So, lets dig into how Arsenal’s misery came about at the hands of Liverpool!

Liverpool started the game well, with right-back Trent Alexander-Arnold creating a chance in the 22nd minute to put the Reds in front, hitting a powerful shot, which unfortunately was deflected on to the top bar of the Arsenal goal.

Before that, Sadio Mane’s shot from close range was deftly kept out by Arsenal custodian Bernd Leno.

The Gunners then claimed the first cherry in the 24th minute when Reds left-back Andy Robertson had a defensive nightmare.

The Scotland international literally gifting the ball to Arsenal striker Alexandre Lacazette right in front of the Liverpool goal when he wrongly played Ainsley Maitland-Niles’ cross to the Frenchman, whose untidy effort looped over Alisson and into the back of the net.

To Liverpool’s dismay, Arsenal were one-nil up!

The hallmark of a great team is their never say die attitude!

Liverpool continued to endorse this sentiment just two minutes and 27 seconds after conceding, with Sadio Mane equalising, courtesy of a simple tap in.

Andy Robertson then more than made up for his earlier defensive blunder as he put the Reds in front in the 34th minute after latching onto a mouth-watering cross from fellow full-back Trent Alexander-Arnold.

Liverpool were 2-1 to the good!

The Gunners did get their opportunity to equalize in the second half, with Alexandre Lacazette almost scoring, only to be denied by Alisson.

Thankfully, the Reds were still in front!

It was now time for the Reds to see out the rest of the match and guarantee themselves the three points when Diogo Jota, the Portuguese forward who was recently acquired from Wolverhampton Wanderers, scored Liverpool’s third with a driven finish from the edge of the circle after coming on as a substitute.

The game was all but over for Arsenal as Liverpool marched on with their third victory in a row, thus cementing their more than bright start to the season.

Truth be told, with last night’s enthralling performance, the Reds certainly got more than a measure of revenge for their last two losses against the Gunners.

What’s more, with this win, the Reds have climbed to second on the table, behind Leicester City, who if I may add, literally gave the blues to Manchester City with their 5-2 triumph at the Etihad at the weekend.

Next up for Liverpool in the Premier League is Aston Villa away, and well, every Kopite, including me can surely smell our fourth win on the trot!

Who would dare to doubt this, with performances soaring in every game and millions of Reds around the world reminding each and every Liverpool player ‘You’ll Never Walk Alone’!

Also Read: Daniel James deserves another season to prove himself at Manchester United