With a closely fought 4-3 win, thanks to a hat-trick by Mohamed Salah, Liverpool managed a narrow escape against an inspired Leeds United at the weekend. 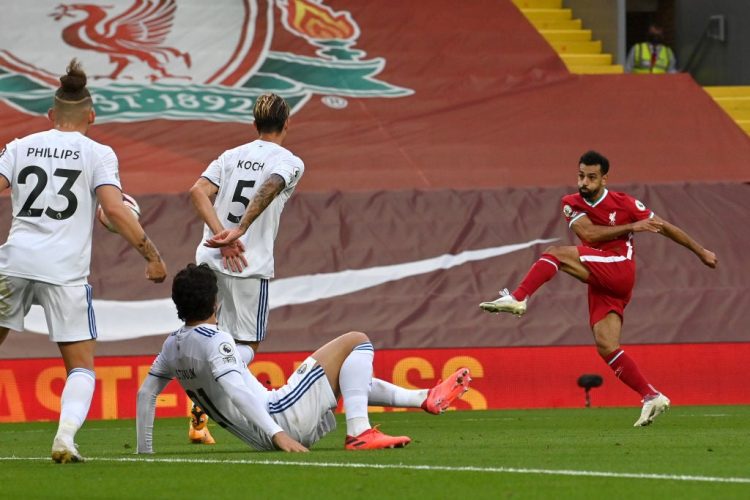 The Premier League in its most vibrant form always excites, doesn’t it!

A case in point example was the wonderful and captivating match we experienced on Saturday.

Anfield had once again opened its doors for the 2019-20 champions in the opening day fixture of the new season amid Kopites cheering in spirit.

You’ll Never Walk Alone had a new meaning, as the entire Liverpool team marched together on the field to not defend but attack their title!

The visitors, Leeds United were playing top division football after a whooping gap of 16 years.

Yes, the last time they had qualified for the Premier League was way back in 2003-04.

And what a contest it was, with the pendulum constantly swinging both ways and truth be told one couldn’t put a finger on a decisive winner.

Such was the knife edge challenge that even a football neutral was stuck to his seat to see this roller-coaster ride unfold.

After going back and forth on 3 occasions, finally the Reds grabbed the last shot on the cherry, with the ever-reliable Mo Salah’s 88th minute conversion from the spot kick.

So, lets dig into the three things we learnt from this contest!

His team more than showed up at Anfield to not fill numbers but instead play a brilliant and decisive brand of football to come from behind on three occasions to give us an enthralling contest.

Truth be told such was the character shown by the Peacocks, that there were times when I felt could the Merseyside club lose at home to a team that hasn’t played top division in 16 years?

Their performance and the insatiable need to draw level each time was testament to the fact of not missing a single beat with conversions from Jack Harrison (12’), Patrick Bamford (30’) and Mateusz Klich (66’).

What’s more the latest English defensive midfielder Kalvin Phillips who earned his debut cap against Denmark in the recent Nations League contest was more than impressive with his assist for the first goal.

Honestly, Liverpool lacked good defensive display with Leeds scoring their second goal through a defensive err from the ever-reliable back stalwart of the Reds, Virgil Van Dijk.

Not the best evening to remember for the Reds.

A big applause must be bestowed upon Mo Salah or should I say Go Salah with his go-getter performance to score a hat-trick in a game that all pundits would agree could have gone south for Liverpool.

Salah seemed in an imperious mood with his first penalty conversion in just the 4th minute of the game, followed by a powerful 33rd minute strike to put the Reds in front when Leeds had equalised 2-2 in the 30th minute.

And to top that up, the cherry on the cake was his 88th minute conversion from the spot to seal the game 4-3, when it looked towards heading for a not so encouraging draw for the Merseyside club.

In his winning pursuits for the Reds, Salah became the first Liverpool player to score a hat-trick in the opening game of a league season since John Aldridge against Charlton in 1988-89.

He also became the first Liverpool player to score in 4 consecutive seasons on the opening day of the Premier League.

What’s more, Virgil Van Dijk also deserves a mention for his strong header to put the ball past Leeds’s goalkeeper in the 20th minute to give the lead to the Reds before Leeds United came back to equalise.

If one is an ultimate optimist when it comes to supporting Liverpool, he would say the Reds continued their mantra of Come.Play.Conquer.Repeat that we have been so accustomed to see in the last couple of years with the 2018-19 Champions League and the 2019-20 Premier League triumph.

Having said that, there were defensive errors and truth be told the Reds looked a little shaken and unsure at the back.

Even Jurgen Klopp agreed on the not so encouraging defensive display, though he also mentioned about the attacking brand of football that the Reds played from the outset to begin the season which surely is commendable.

From a realistic perspective, when it comes to challenging the bigger teams, the Reds need to pick up their socks and complacency absolutely cannot creep in.

With Saturday’s performance if I may call it below par, it is not going to be easy to retain the title this season albeit if one knows the Reds if it’s easy, what’s the fun in winning!

A much-improved effort on the cards against the blues?

Well for every Kopite this is surely more than hope!