Manchester United are in talks with the representatives of Luka Jovic and Edinson Cavani, and are looking to bring in one of them before Monday's transfer deadline. 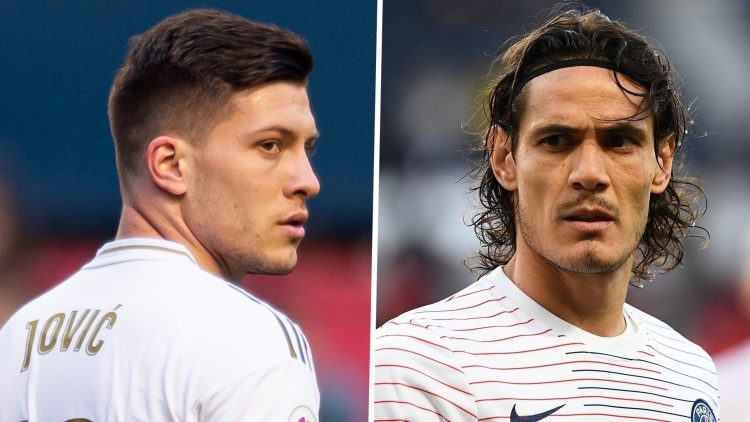 Who will be a better fit at Manchester United between Luka Jovic and Edinson Cavani? (Image Credits: Twitter)

Manchester United have been hunting for a striker in the market since last year when they sold Romelu Lukaku to Inter Milan. They tried and failed to sign Erling Haaland in January and ultimately signed Odion Ighalo on loan towards the end of the winter transfer window.

Ighalo has not been pulling up trees in the limited amount of opportunities he has been getting and his performance against Luton Town last week showed the paucity of options Ole Gunner Solskjaer had on the bench.

Manchester United have been working to sign a right-side forward all summer with Jadon Sancho being their top target but the need for another striker has never gone away.

And in the final week of the transfer window, they have sprung into action and are in talks with the representatives of Real Madrid forward Luka Jovic and former Paris Saint-Germain hitman Edinson Cavani.

Jovic is being considered as a loan option for a season and Cavani is on their radar as someone who could add real experience and pedigree to their squad.

Luka Jovic’s first season at Real Madrid can cloud the fact that he was one of the most wanted strikers in Europe last year following his performance at Eintracht Frankfurt. He scored 27 goals in all competitions for the Bundesliga outfit in the 2018/19 season and it led to interest from some of the biggest clubs in Europe.

Real Madrid beat of competition from several clubs to land the Serbian in the summer of 2019. But everything that had to go wrong did go wrong for Jovic in his first season at the Santiago Bernabeu.

The bright lights of the Santiago Bernabeu can be intimidating for any young player and Luka Jovic struggled to make an impact. Zinedine Zidane’s unwavering faith in Karim Benzema didn’t help his cause.

He made just four league starts and got on the scoresheet just twice during his first year at Real Madrid and now he could on his way out of the club.

However, Real Madrid only want to loan him out with no option to buy as the club still feel he can have a long term future at the club. The Spanish champions feel a season away from the Bernabeu could help the Serbian to rekindle with goalscoring.

And Manchester United have come calling to provide him refuge at Old Trafford for a season.

Luka Jovic is only 22 and will suit Ole Gunnar Solskjaer’s young and hungry forward line. Manchester United have already made progress in talks with his agent and the Serbian is believed to be fancying a move to Old Trafford.

Real Madrid’s interest in only loaning him out also suits Manchester United and it is the easier deal do for the Red Devils with only a few days left in the transfer window.

The 33-year-old striker has also emerged as another option for Manchester United in the final days of the transfer window. After spending seven years and scoring 200 goals in 301 appearances, Edinson Cavani left Paris Saint-Germain at the end of last season and is available on a free transfer.

Cavani is a proven performer in Europe and will definitely add experience to a young forward line at Manchester United. He could also a leader in a team that lack strong characters on and off the pitch. The Uruguayan has scored goals at all his clubs and there is no reason to suggest that even at 33 he has lost his touch inside the penalty box.

He remains a deadeye finisher even at the twilight of his career and his quality is something Manchester United could do with, in their forward line.

However, signing him would be a slight departure from Manchester United have been doing in the market under Ole Gunnar Solskjaer. The Norwegian has been keen to add young talent to his squad and at 33, Cavani’s best days are behind him. The Uruguayan is also likely to demand a starting berth in a team where Anthony Martial has emerged as the de facto number 9 over the last year.

Cavani’s wage demands are also an issue and it was one of the primary reason why his move to Benfica collapsed last month. He demanded a three-year deal worth €30m and Benfica were happy to back out of the negotiation.

Manchester United are determined that they are no longer the club who offered a silly pay packet to Alexis Sanchez in January 2018. They have learned their lessons from that deal and are keen to avoid making those same mistakes in the market.

Signing Cavani would be a more complex operation due to his financial demands, both wages and a signing-on fee, and the high agent fees associated with the potential deal.

The odds are that Manchester United would rather take a punt on a 22-year-old Luka Jovic for a year than go for an ageing Edinson Cavani who could soar up their wage bill further.

Also Read: Why Rhian Brewster is set to leave Liverpool on a permanent deal?