A rejuvenated Arsenal side will travel to the Etihad to take on an under-performing Manchester City team on Saturday. 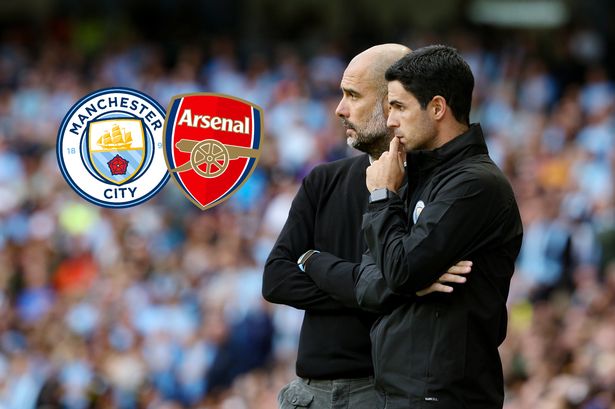 It will be a battle between the master and the apprentice on Saturday. (Image Credits: Twitter)

Pep Guardiola’s former deputy Mikel Arteta will be looking to humble the Manchester City boss as Premier League returns after the international break in this weekend.

Arsenal have looked comfortable and settled under Arteta, who is on a mission to reform the club with matured signings, balanced gameplay and a long-term plan.

But Manchester City have looked out of order with the team missing cohesion and combination as Guardiola is in search of the perfect team set-up to set their season rolling after an average start.

Manchester City have been shaky and unsettled in the 2020/21 season. Their first win of the season, which came against at Wolhermapton Wanderers, was a mixed affair.

Wolves could have easily pulled off a draw if not for the missed chances. The Citizens were then humbled at home by Leicester City in an unforeseen 5-2 loss. Their third Premier League game ended in an encapsulating 1-1 draw against Leeds United, who could have easily won the contest.

The only two convincing games played by Pep Guardiola’s Manchester City were the wins over Burnley and Bournemouth in the EFL Cup.

On the other hand, Arsenal are a changed outfit this season. Under Mikel Arteta’s management, the Gunners have been a fresh unit. They began their Premier League campaign with a comfortable 3-0 win at Fulham, followed by a 2-1 win over West Ham at home.

They lost at Liverpool 3-1 due to an obvious difference in quality but came back strongly against Sheffield United with a 2-1 win. The Gunners have also been exceptional in the EFL Cup with wins over Leicester City and Liverpool.

The first-ever time the two teams met was way back in 1893 in a League Division Two match, with Arsenal winning the contest 0-1. Since then, the Gunners have a better head-to-head record against Manchester City.

However, recent trends suggest that Manchester City have an overwhelming advantage over Arsenal in the Premier League.

City have won all six of their previous six Premier League meeting against Arsenal. However, Arteta’s Arsenal did beat the Citizens in last season’s FA Cup semi-finals.

Manchester City are expected to miss the services of star player Kevin De Bruyne as the Belgian trudged off during his country’s defeat to England at Wembley in the recent international break, and has been out of action ever since.

The Citizens will, however, see the return of Raheem Sterling, despite the forward missing England’s recent fixtures due to a precautionary hamstring withdrawal.

Sterling’s presence will be key as Manchester City continue to miss Gabriel Jesus and Sergio Aguero. Ilkay Gundagon will be available and Oleksandr Zinchenko is expected to return.

There is a question mark looming on the availability of their star man Pierre-Emerick Aubameyang due to a possible sprained ankle. However, reports suggest that he is fit to play.

Arteta will be hopeful that Kieran Tierney will be available, despite his isolation from the team due to a possible coronavirus situation.

Deadline day signing Thomas Partey is expected to make his Arsenal debut, while Emile Row, Pablo Mari, Shkodran Mustafi, Gabriel Martinelli and Calum Chambers are expected to sit out due to injuries.

Manchester City vs Arsenal: Where to watch

The game will be telecasted LIVE on Sky Sports Premier League and Sky Sports Main Event. The game can be LIVE streamed on SkySports.com and the SkySports Application.

The game will be telecasted on Star Sports Select 1 in the Indian Subcontinent and will be streamed on Disney+ Hotstar Premium.

Manchester City have looked unsettled and not in cohesion in recent games. Pep Guardiola’s side are further plagued by several injury concerns.

On the flip side, a rejuvenated Arsenal side are going towards the right direction, with the team slowly settling down and playing for Mikel Arteta.

The game at the Etihad is set to be a closely contested affair and is expected to end in a draw.

Also Read: 5 matches to look forward to this weekend