Manchester United and Jadon Sancho: The anatomy of a transfer saga

Manchester United want Jadon Sancho, the player wants to leave and Dortmund are prepared to sell. So what's the hold up? A lot still needs to happen for the move to go through. 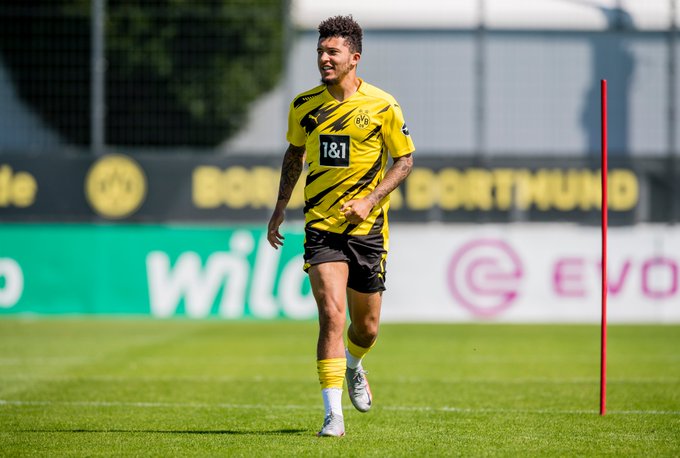 Jadon Sancho to Manchester United is the transfer saga of the summer. (Image Credits: Twitter)

Jadon Sancho to Manchester United has emerged as the overarching theme of this summer’s transfer window. It has the makings of being a transfer saga that might roll on until deadline day on 5th October.

On the surface, it looks like a simple negotiation – Manchester United want him, Jadon Sancho wants to return to England, the Red Devils are the only Premier League side in the race and Borussia Dortmund are prepared to let him go. What can possibly be complicated about it? A lot actually.

Dortmund want a package of €120m and Manchester United believe that the asking price is unrealistic given the financial hit, football has taken due to the ongoing COVID-19 crisis.

The brinkmanship, the leaks to the media from both sides and loud claims from club officials – this saga has it all.

It was clear midway through the 2019-20 season that Jadon Sancho will be leaving Dortmund this summer. The Bundesliga giants set an asking price of €120m very early on and were expecting a real auction for his services with several clubs wanting him.

Jadon Sancho has been Manchester United’s number one target for a while but before the COVID-19 crisis, Barcelona, Real Madrid, Chelsea and Liverpool were also interested.

Barcelona and Real Madrid are reeling under financial pressure due to their inflated wage bills and debts and the COVID-19 crisis has only worsened the situation. Liverpool decided early that they would not be spending big on Sancho and Chelsea are prepared to spend big but the Blues want to invest in other areas of the squad.

And that leaves only Manchester United in the race to sign Jadon Sancho. This is not an ideal situation for Dortmund as the chances of getting their asking price was always going to be higher if more clubs were in the pursuit of the 20-year-old.

However, Dortmund have continued to maintain that they want €120m and they are not budging from that stand. Their internal deadline of 10th August did come and go and club CEO Hans-Joachim Watzke has claimed that they are planning next season with Sancho.

The problem for Dortmund? No one believes them, neither the football world nor Manchester United.

The Red Devils believe that they will get their man but it will take a few more weeks of negotiations before an agreement is reached.

If one is to believe Manchester United fans, they should write the check of €120m right now and get the deal over the line. But in the real world, transfer negotiations are much more complicated.

Manchester United are right in feeling aggrieved by Dortmund’s refusal to adjust their asking price with the new reality of a post-COVID transfer market. They are financially on a stronger footing than most other clubs in Europe.

But the Premier League giants still suffered financially. They didn’t lay off any of their staff, they continued to pay the full wages to regular and non-regular Manchester United employees and didn’t negotiate any salary cuts with the players.

Can Manchester United pay that figure? Yes, they can. The fee would be a paid over multiple instalments so it is unlikely to be a problem. But it is prudent of the club to take stock of a very different market and it is expected that transfer values of players should come down.

Manchester United have been frustrated by Dortmund’s negotiating tactics as well. The Bundesliga giants have insisted that there has been no official contact from the Red Devils, but Dortmund are the ones who have been insistent on the use of agents rather than hold direct talks with Manchester United officials.

Given the way Manchester United have behaved in recent windows, they are likely to pay the €120m figure. They paid the asking price for Harry Maguire last summer after months of haggling. The same happened with Aaron Wan-Bissaka and Bruno Fernandes.

But there is absolutely no harm in trying to negotiate the price down. To not try to do it would be irresponsible.

It would also help Manchester United’s cause if Jadon Sancho starts acting up – phantom injuries,  transfer request and agents saying stuff to the media – the whole ‘I want to leave’ shebang.

Jadon Sancho is the Manchester United manager’s top target and he believes the winger can take his team to the next level. The England international’s arrival will also give Ole Gunnar Solskjaer the option to change things around in his forward line.

It is clear that the Norwegian doesn’t have much trust in the other attacker apart from the front three of Marcus Rashford, Anthony Martial and Mason Greenwood. Sancho will give him that extra option and allow him to rotate his forward players around and try different combinations.

Manchester United players will get a short break at the end of the Europa League campaign. By the time the squad reassemble to prepare for the new season, Ole Gunnar Solskjaer would want Jadon Sancho in the building.

Will the transfer go through? Most probably, yes. When will it happen? No idea but definitely before 5th October.