Manchester United would be wrong to think that they could wait one more year to sign Jadon Sancho and must look to get the deal done in the ongoing transfer window. 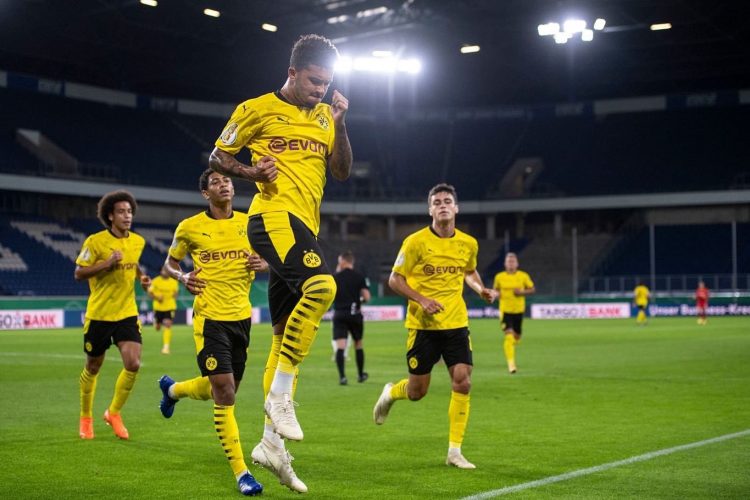 This summer could be the last chance for Manchester United to get Jadon Sancho. (Image Credits: Twitter)

Manchester United are four days away from starting their Premier League season with a home game against Crystal Palace and there is already a sense of impending doom amongst the angst-ridden fanbase.

The club were supposed to build upon last season’s top-four finish and give Ole Gunnar Solskjaer’s the funds needed to continue their progress into the new campaign. Jadon Sancho has been a target for Manchester United since last summer but he was seen in Dortmund colours again on Monday.

Dortmund have been insistent on not losing him for a fee less than their long-held asking price of €120m and Manchester United have stressed that the figure doesn’t take into account the instable nature of football’s finances in the current market.

The club are expected to incur losses to the tune of more than £100m due to the COVID-19 pandemic and with a fear of a second wave of infections hitting Europe in the fall, there is always a chance that next season could also see more disruptions.

Manchester United are not being unreasonable in wanting Dortmund to readjust their asking price. Spending €120m on one player while people across the world deal with the possibility of job losses and unemployment is not a good look as well.

However, the club do have money to spend and if they want, Manchester United can easily match the €120m through a structured deal. This could also be the last opportunity to sign Jadon Sancho without facing competition from some of the biggest clubs in Europe.

Chelsea’s Kai Havertz capture is the template for Manchester United

At the start of the year, Kai Havertz was chased by the biggest clubs in Europe. Bayern Munich wanted him, Barcelona were interested in him and Real Madrid were also keen to take him to Spain.

Chelsea had long held an interest but they were never the favourites to sign the Germany playmaker. But then the global pandemic hit and revenue streams of the biggest clubs dried up amidst economic lockdowns and empty stadiums.

With Bayer Leverkusen sticking to their €100m asking price, Chelsea turned out to be the only club with the money to do the deal for Havertz. In any other summer transfer window, Havertz would have likely joined Bayern Munich or move to Spain.

But the Blues took advantage of an unsavoury situation and with the player insisting on leaving Leverkusen, they pushed to get the deal done with the German club.

Jadon Sancho was also on the lips of the biggest clubs at the start of the year. Real Madrid wanted him and Liverpool were also keen on taking him to Anfield. But the COVID-19 pandemic means none of those two clubs have the finances to do the deal this summer.

While Manchester United are naturally reluctant to spend €120m amidst the uncertainty surrounding football, they do have the money to sign him and this could be their only opportunity.

There is a word that they will try again next summer if they fail to sign Sancho this time around but there might not be a next time for Manchester United.

The scenario might be completely different next year and Liverpool or Real Madrid could easily have the money to sign Sancho. The winger is keen on a move to Manchester United but in reality, they are the only option for him this year.

At the end of next season, he could have two or three offers on his table and suddenly, Manchester United will not be the only player in the market.

If Manchester United believe that Sancho is the game-changing winger they want, this is the transfer window to do a deal. €120m is a lot of money but as Chelsea showed with Kai Havertz, if the opportunity is right, clubs should push the boat and pay a few extra quid to sign a young talent of genuine pedigree.

The Glazers will feel the heat if they bungle this window

Malcolm Glazer is believed to be the main driving force behind Manchester United’s reluctance to spend €120m on Jadon Sancho. He is said to be closely tracking all big spending and for the moment, he is yet to sanction the large outlay to sign the England winger from Dortmund.

The Manchester United owners are not the most popular people amongst the fans since they took over the club in 2005 through a highly leveraged deal that saddled the club with millions of pounds of debt, which the club are still repaying.

While Manchester City owners have poured in more than £1bn into their club in the last ten years, Manchester United have seen a £1bn move the other way from Old Trafford.

Roman Abramovich has loaned £440m to Chelsea in the last five years but Manchester United have paid their owners £111m in dividends and directors’ fees. The Red Devils have paid another £120m in interest payments due to the Glazers’ leveraged buyout of the club.

The numbers are not a nice reading if you are a Manchester United fan and that is why the dragged nature of the negotiations is becoming more infuriating. The Glazers can’t cry ‘pandemic’ and then take millions of pounds out of Manchester United in the same breath.