Manchester United are likely to play their best team against FC Copenhagen and will not be taking chances in a one-off game despite the difference in class between the two teams. 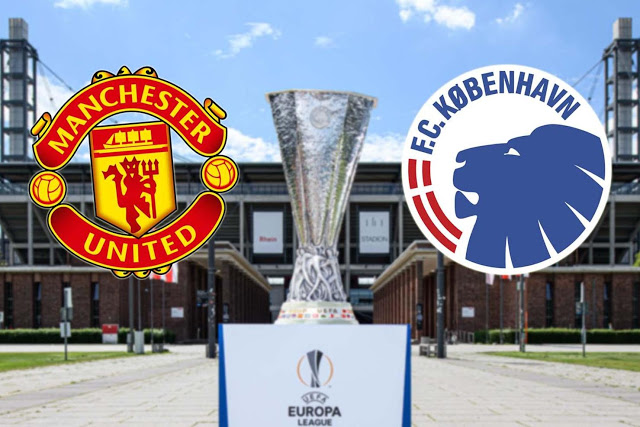 Manchester United are massive favourites to win but can FC Copenhagen pull off a shock in Cologne tonight? (Image Credits: Twitter)

Manchester United have taken their strongest squad possible to Germany for the final rounds of the Europa League. They are now one of the favourites to go all the way and lift the trophy in Cologne later this month.

The Premier League giants are expected to beat FC Copenhagen in the quarter-finals but do not expect a second-string side to take on the Danes. Ole Gunnar Solskjaer wants to win a trophy at the end of his first full season as Manchester United manager and the big guns will be on display in Cologne tonight.

FC Copenhagen are aware of their underdog status and have nothing to lose against the Red Devils. They have never made this far in the Europa League until now and will look to enjoy the occasion.

The one-off nature of the tie also gives them a better chance of pulling off a shock result than in a traditional European two-legged affair.

Manchester United vs FC Copenhagen: The path to the quarter-finals

Round of 32 Manchester United:

Round of 16 Manchester United:

Manchester United made easy work of their group games and despite a defeat at Astana, they comfortably qualified to the Round of 32 of the Europa League as winners of their group.

The Premier League giants had a difficult night in Belgium in the first leg of their last 32 clash against Club Brugge and were lucky to escape with a 1-1 draw.

However, they completely outclassed the Belgian champions at Old Trafford in the second leg, beating them 5-0 to book a place in the next round.

Manchester United more or less had the Round of 16 tie wrapped up in the first leg itself when they beat LASK 5-0 away from home. The home leg months later was just a formality and an Anthony Martial later winner meant that they claimed victory at Old Trafford as well.

Round of 32 FC Copenhagen:

Round of 16 FC Copenhagen:

Unlike Manchester United, FC Copenhagen had to work harder to reach the knockout rounds of the Europa League. They had to beat Latvian outfit Riga in the playoffs to make it to the group stage of the competition.

The Danish outfit showed resilience in the group stage and lost just once to Malmo on the last matchday. Three draws and two wins were enough to finish second in Group B and they edged out the more fancied Dynamo Kiev to reach the Round of 32 of the competition.

FC Copenhagen were again underdogs in the first knockout round against Turkish champions, Istanbul Basaksehir. They lost the first leg in Istanbul 1-0 but a remarkable 3-0 win at home months later earned them the right to take on Manchester United in the quarter-finals of the Europa League.

Manchester United and FC Copenhagen met each other almost a decade-and-a-half ago in the Champions League group stage in 2006.

The Premier League giants romped to a 3-0 win at home through goals from Paul Scholes, John O’Shea and Kieran Richardson.

The Danish outfit pulled out one of the greatest results in the club’s history at the Telia Parken when they beat Manchester United 1-0 through a strike from Marcus Allback.

Despite the difference in stature between the two clubs, their head-to-head record for the moment stands at 1-1.

Manchester United are coming into the game on the back of finishing third in the Premier League and beating LASK in the second leg of their Europa League last 16 tie. Goals from Jesse Lingard and Anthony Martial were enough to win a game, which was a formality due to the 5-0 victory they recorded in the first leg.

FC Copenhagen are also in a good form coming into the game. They have won their last three in all competitions, including the 3-0 demolition of Basaksehir in the second leg of their Europa League last 16 tie.

Manchester United form in the last five games in all competitions: W-L-D-W-W

FC Copenhagen form in the last five games in all competitions: L-L-W-W-W

Ole Gunnar Solskjaer has indicated that his biggest stars will feature in the latter rounds of the Europa League and his team want to go all out to win the trophy. The Premier League giants have taken their strongest squad to Germany in what they are hoping would be a three-game run to the trophy.

Solskjaer refused to commit that Sergio Romero will continue in goal despite the Argentine playing all the games barring one in the Europa League this season. However, he is still expected to start between the sticks.

Phil Jones has been left out of the squad due to an injury and Luke Shaw and Axel Tuanzebe will also miss the rest of the season.

Diogo Dalot has travelled with the squad but he is unlikely to make the team as he is reportedly training alone, away from the rest of the squad.

Manchester United are going into the game as odds on favourites to beat Copenhagen and reach the last four of the Europa League. With Solskjaer wanting to win his first trophy as manager at Manchester United, he is unlikely to experiment too much and so expect his big guns to start against the Danish outfit.

The one-off nature of the game makes the odds of FC Copenhagen pulling off a shock result a little better.

Over a two-legged tie, they would have definitely been outclassed but Copenhagen will fancy their chances a bit more over 90 minutes or more. But it would be a major surprise if they manage to stretch Manchester United on Monday night.