Manchester United’s interest in Sergio Reguilon is a no-brainer

Manchester United are said to be keen on signing the Real Madrid full-back as they want to upgrade their options at left-back next season. 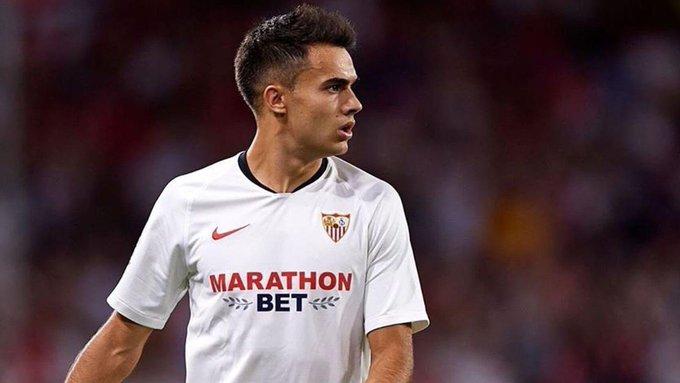 Manchester United's interest in the Real Madrid full-back is not a surprise. (Image Credits: Twitter)

Luke Shaw’s career at Manchester United is yet to take off, despite being at the club for six long years. His best games last season came as a left centre-back as part of a back-three and his performances at left-back have continued to lack consistency.

Brandon Williams had some good games in the full-back position but as with most young players, his performances were a bit up and down.

Manchester United were believed to be unwilling to bring in a new left-back in the summer as other areas of the squad were more in need of investment. But reports in Spain suggest that the Premier League giants are interested in Real Madrid’s 23-year-old left-back Sergio Reguilon.

The Spaniard was on loan at Sevilla last season and was voted as La Liga’s best left-back after a brilliant campaign with the Basque outfit.

Real Madrid are believed to be ready to sell him for a fee of around €30m as the club continue to look raise funds from the market after seeing their finances get badly hit by the COVID-19 pandemic.

Several clubs are interested and Manchester United are said to have tabled an offer to take Sergio Reguilon to Old Trafford during the ongoing summer transfer window.

Manchester United have already spent €40m to sign midfielder Donny van de Beek from Ajax and are still interested in Jadon Sancho, who could cost around €120m. They are still in the market for a centre-back but talks of signing a new left-back only emerged this week with the Sergio Reguilon links.

But Manchester United fans have been crying out for a new left-back after watching the inconsistent Luke Shaw over the last five years.

The England international is yet to realise the potential he showed as a teenager at Southampton and his injury record doesn’t make him a player a manager can reply upon for a season.

Brandon Williams has impressed in some games but he is still 20 and is still not at the level where he can play week-in-week-out for a club of Manchester United’s stature and ambition.

Sergio Reguilon really came into his own last season and had a wonderful campaign at Sevilla. His performances in La Liga made him one of the best left-backs in Europe and turned heads in recruitment teams across Europe.

The Spaniard’s consistency made him a fan-favourite at Sevilla and the club are ready to have him back in their squad next season as well on another loan deal. But Real Madrid are believed to be keen on selling him this summer.

Despite Sergio Reguilon’s performances, Zinedine Zidane will continue to back Marcelo for the left-back position and for the moment, the Spaniard doesn’t seem to have a future at the Bernabeu.

Manchester United are in need of reinforcement at left-back as the Premier League giants have continued to suffer due to the lack of top-class full-back options. Reguilon has already proven himself at a top club such as Sevilla and won the Europa League last season with the Spanish outfit.

His arrival would instantly improve Manchester United’s defence further with a genuine option at left-back. The possible move for Sergio Reguilon could also come as a shock for Shaw and could push the England defender to take his game to the next level.

With Manchester United willing to sell Diogo Dalot, the right-footed Brandon Williams could be used as the back-up to Aaron Wan-Bissaka at right-back.

What next for Luke Shaw if Manchester United sign Sergio Reguilon?

Sergio Reguilon still has three years left on his Real Madrid deal to run but little chance of him getting an opportunity next season, the Spanish giants are prepared to sell him this summer.

In a normal market, Los Blancos could have demanded big money for one of the best young left-backs in Europe. But a pandemic-induced depression in the transfer window means Real Madrid are willing to accept a lower figure.

There are claims that they are prepared to sell Reguilon if they receive a fee in the region of €25m to €30m. The sticking point in the negotiations could be Real Madrid’s willingness to include a buyback clause in any agreement to sell him. It is unlikely a club of Manchester United size might agree to such an arrangement.

But at the quoted figure, Reguilon will be a real bargain, given Manchester United spent almost €34m to sign Luke Shaw from Southampton in 2014. The Spaniard’s consistency and his ability to create chances at the other end makes him a better bet than anything Shaw has shown in Manchester United colours over the last six years.

The Spaniard will likely to be a certain starter if he joins Manchester United and that could be the motivation Shaw might need to turn his potential into real quality or he could just fade away before leaving the club.

One way or the other, Sergio Reguilon’s arrival could be the making of Luke Sahw.