With ten days left in the window, Manchester United are still chasing the shadow of Jadon Sancho. The club must not shy away from making the unpopular decision of ending their interest in the Dortmund winger. 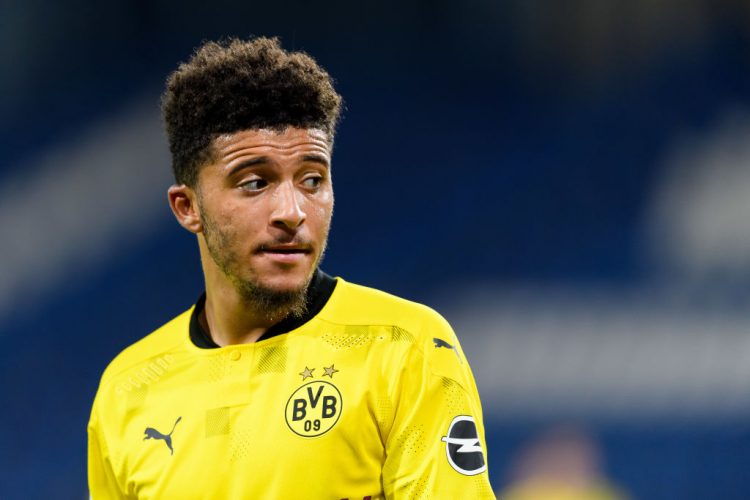 Manchester United entered the transfer window with the clear idea of signing a right-side forward and Jadon Sancho has been their priority target.

There are only ten days left in the window, Sancho is still a Dortmund player and the Premier League giants are still interested in signing him.

Dortmund have been insistent on not selling Sancho but Manchester United have not definitively ended their interest in the winger. There are reports that they will make a ‘take it or leave it bid’ next week to test the Bundesliga giants’ resolve.

But the indications are that the 20-year-old will remain a Dortmund player unless Manchester United agree to meet the €120m asking price set by the BVB.

The Premier League giants have made it clear that they do not want to pay that figure amidst a global pandemic where the revenue streams of the biggest clubs have dried up.

Manchester United are reportedly preparing to take a hit of £140m, which is likely to be represented in the quarterly financial results they will publish at the end of the transfer window.

But that begs the question, why are Manchester United are still chasing Jadon Sancho? If they do not believe that it is not worth paying €120m for him this year, why not pursue other targets?

Dortmund have not given any mixed signals. They are clear about what they want, so why Manchester United still seem to be chasing a silhouette with ten days left in the window?

Manchester United fans are angry, and watching their rivals signing players has left them in a state of constant agitation. The modern online fans are desperate for the dopamine hit of their clubs signing players.

Watching Arsenal, Chelsea, Liverpool and Tottenham celebrating the arrival of new signings has left the Red Devils fans tweeting at journalists and clutching at straws.

It is almost clear as daylight that Manchester United are often used by agents to smoke out the real interest in their players.

Was the club ever seriously interested in Thiago Alcantara? Sergio Reguilon’s plan is to return to Real Madrid and that’s why the buyout clause was included in the agreement that saw him join Tottenham Hotspur. But nuance is something that is going out of fashion.

Manchester United’s recruitment has been patchy but I have some sympathy for the club when they get linked to a player they never went for and get pilloried when they do not sign him.

Jadon Sancho is a real target for sure and Manchester United are still chasing. Every positive news regarding the pursuit has been celebrated and every set-back has been treated as the end of the world.

A large section of the United fans would be appeased if Sancho is seen holding the shirt up before 5th October. But why are the club trying to appease the fans? Recruitment decisions can’t be based on what player fans would like to see playing for Manchester United.

If they really believe that paying €120m for a player in the current market is obscene, own that position. Why are we still hearing that the club are trying to sign him even in the final ten days of the window?

Since Sir Alex Ferguson’s retirement, Manchester United have all been about appeasing fans and taking popular decisions, not necessarily the right ones. Does anyone remember the hysteria at the end of the 2014 summer transfer window? Angel Di Maria and Radamel Falcao arrived amidst much fanfare. They were not at the club a year later.

Bastian Schweinsteiger and Morgan Schneiderlin were expected to change Manchester United’s midfield in 2015. Memphis Depay was snapped up amidst much fanfare. They were all popular arrivals and they were all flops.

Louis van Gaal’s appointment as Manchester United manager was popular. Fans were desperate to see Jose Mourinho in 2016 even as Van Gaal was leading the club to their first trophy since Ferguson’s retirement.

The clamour to give Ole Gunnar Solskjaer a permanent contract grew over the spring of 2019 on the back of a brilliant run of form. All popular and much-heralded decisions.

Solskjaer has moulded his managerial style to Ferguson’s but the Norwegian should remember his former boss never cared about what the fans thought. He got rid of fan favourites such as Norman Whiteside at the start of his reign and sold Andrea Kanchelskis, Paul Ince and Mark Hughes in 1995 and signed only a reserve goalkeeper.

He took on Roy Keane, sold Ruud van Nistelrooy and signed only Michael Carrick in 2006. They were highly unpopular decisions but his priority was building his team and not what the fans thought about the job he was doing. Ferguson made mistakes in the market as well, signing players is not an exact science but he stuck to his convictions.

If the Manchester United manager believes that he needs to sign a right-side forward to improve his squad and Sancho is unattainable, he should sign someone else.

Why are Manchester United chasing a shadow? Of course, ending their pursuit of the winger will enrage a section of fans who have more or less turned into transfer junkies, but the club should not care.

Their recruitment decisions should not be based on what the fans want. With all due respect, they are not sporting directors, scouts, and contract negotiators or are aware of what goes into signing a player.

Manchester United have taken enough popular but bad decisions over the last seven years. Over the last year, they have improved their recruitment with the signings of Harry Maguire, Aaron Wan-Bissaka and Bruno Fernandes. They must stick to those principles, even if they alienate the fans.

Jadon Sancho will definitely improve the squad but the club must sign him for the right reasons and not for the engagements on social media or as a dopamine hit for their fans.