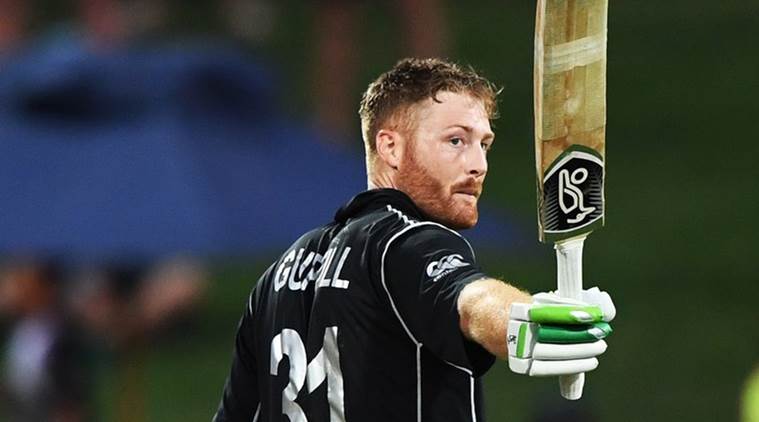 When faced with a daunting challenge, bowlers often resort to subterfuge. Often, taking batsmen head on doesn’t help. You might be maintaining the most unbending length right around middle and off and it might not yield into a wicket. Not everyone is a McGrath at the end of the day.

In such scenarios, bowlers opt to rest their craft with subtle and cleverly disguised variations in the wake of a situation where the pitches just don’t assist seamers or spinners.

You’d suddenly find an in-swinging yorker out of nowhere followed by a deceptive slower cutter, the one that manages to move away from the off stump, beating the outside edge by perhaps the thinnest margin possible. We’ve seen a Rabada and Bumrah, Bhuvaneshwar Kumar and Tim Southee nearly perfect the art without much ado.

So what does Martin Guptill, a scorer of nearly 6000 ODI runs for New Zealand, do when confronted with doubt? It’s pretty simple and slightly Virendra Sehwag-like. Guptill simply whacks an attack in to oblivion.

He can reduce pace and spin into thin shredded pieces, the ones you see topping a gastronomical continental delight such as a Pizza. Tall but not lithe, powerful but not bulky, Martin Guptill combines the added advantage of his height, into executing strokes freely. There are few in the game that can play the bottom handed jab toward the square with such panache as Guptill. He’s equally adept at playing some fantastic on-drives and when in full form, his frontfoot strokes on either sides of the wicket ensure the white ball often meets the fence as regularly as a romantic duo that is impassionedly in love.

Cricket romantics who’re accustomed to seeing opening batsmen dominate from the first ball might misappropriate lack of brute strokes that result into a six as being indicative of some restrained form of hitting. In case of Guptill, you never know what’s coming your way if a full-length delivery isn’t placed in some odd row in the crowd. In the absence of sixes, he can breezily walk down the crease- even to new ball seamers- and hoist them towards long on and long off regions, as he so surgically did in his recent outings against Australia and New Zealand respectively.

Interestingly, at a time where much of the focus in a batting-heavy Kiwi side rests with new names like Colin Munro and Tom Latham, Guptill has continued a very Brendon McCullum- style legacy of keeping up the ante of runs. It isn’t easy to keep the runs flowing from the very top of the order. But given the kind of form Guptill has been carrying, ever since the T20s against a listless Windies began towards the end of 2017, there are indications that fireworks are in the offing.

Coming in hard at Pakistan

He looked in supreme touch in the recently concluded limited overs series against Pakistan that were left as clueless as an ageing thespian asked to find a hairpin in a puddle of mud. When Hasan Ali and Mohammad Amir failed to curb the right-hander’s flow of runs on the off side, they resorted to a barrage of short pitched deliveries that more often than not, pitched just short of good length, waning toward the legs. Guptill would simply lift them over deep square leg for a maximum.

A big source of reliability for New Zealand

What also adds to Guptill’s advantage is that the onus of scoring runs doesn’t rest on his shoulders alone. Together with Munro as his opening partner and inarguably one of the best batsmen in the world in Williamson at number 3, Martin Guptill forms the “Big Three” for New Zealand. With the year having just begun seeing some incessant hitting by the lanky batsman with still some time left for the mega World Cup next year, Guptill, one expects would look at all forthcoming contests as great opportunities to consolidate his form.

That being said, here’s how the experienced Martin Guptill has fared in recent series where his blade did the talking whether in the tri-series featuring England and Australia or during the tour of Pakistan to New Zealand