Max Verstappen Roars At Dutch GP, Leads The Title Fight Like A Bull

Verstappen enthralled a home crowd of over 70,000 via a brilliant, fearless win to rule the Dutch GP! 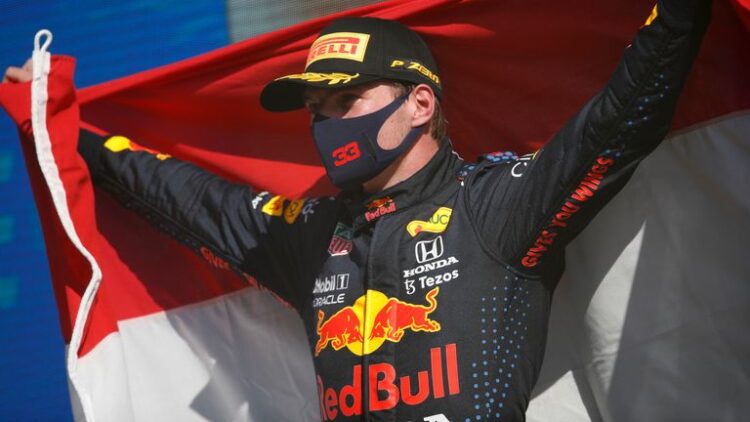 As a precursor to the returning Dutch GP of 2021, which made its way back into F1 after a long gap of thirty-six years, Sir Lewis Hamilton had delivered a cautious warning. It was a warning to all passionate fans and his Mercedes entourage that Verstappen would come back even stronger post the F1-summer break.

This effectively meant that Hammertime would have to really hold strong against the charge of the Bull adorning the navy blue racing suit.

And that’s precisely what transpired first at the massively truncated Spa-Francorchamps bound Belgian Grand Prix (a race one can hardly a Grand Prix), and later, at Zandvoort, home to the Dutch GP.

Max Verstappen- the man of the moment!

With both wins belonging to the massively-talented Red Bull driver, we are seeing a reversal of fortunes in the second half of the season as Verstappen is back to where he belonged in the first-half before Hamilton altered the narrative with a fine win at Silverstone and later, a great podium finish at Hungaroring.

So out here in Max Verstappen-territory, certainly not a landscape that would have cared much for the seven time world champion Lewis Hamilton, albeit sadly so, it was all about the power and glory of the Red Bull.

And it didn’t take local hero Verstappen to rule the headlines, by first setting a ballsy pole position lap time of 1:08:885 and then, by sprinting to the top step of the podium to clinch a dominant win for the Milton Keynes-based outfit.

But there was more weight as well as depth to this Verstappen triumph amid the pressure of performing in front of the overwhelmingly huge Orange Army; Mercedes tried everything in their might to deny the local hero his winning moment.

So how was that?

The Black Arrows first tried the undercut, shifting Lewis to the medium compounds by bringing him early into the pits. This was perceptibly a move to trigger a response from Red Bull, who pitted a few laps later albeit without having the availability of the mediums. Hamilton and Verstappen had both started on the softs.

Yet, Verstappen showed no unflappability whatsoever and was relentless in his pursuit of glory and control of the track position.

He’d take second from Bottas, who eventually took third and even tried unsuccessfully to set the fastest lap time as Mercedes tried to salvage all they could from a contest they knew was fast running out of their hands.

How Verstappen kept up the pressure on Lewis?

Though even when the 2021 Dutch GP winner reclaimed the lead of the race, passing Valtteri fearlessly at the twisty Zandvoort punctuated by banked corners, some blindingly fast, he would see Hamilton coming within striking distance of his Red Bull.

But in demonstrating excellent tyre management as well as race-pace, Verstappen ensured that the gap to Lewis would be a hefty, not a frail one.

That there was never an occasion where Verstappen’s lead to second-place Lewis shrunk to under a second goes to show how dominant the man nicknamed, “Mad Max,” really was.

Unafraid to attack from the word go and never willing to go on the defensive, Verstappen won the Dutch GP, a 72-lap contest, in the same dauntless fashion in which he’d began, cutting right across Hamilton within seconds of the five red lights turning green. This was, of course, in a successful bid to ensure that Lewis, his arch-rival, and possibly, still the antithesis to the 2021 championship, wouldn’t lunge ahead.

A move that was brilliant in execution, so brilliant rather that by the end of the second lap, Verstappen had already opened a 1.5 second lead over a fast-catching Lewis Hamilton, whose troubles soon exacerbated after he felt discomfort in managing race pace on the softer compounds.

Though that was never the case for Max, who achieved the pole and eventually, the win but had to contend the fastest lap to his greatest rival of 2021, Hamilton blazing Zandvoort, a track he admitted to now being among his favourites at- 1:11:097.

But that wouldn’t hurt Max a great deal, who entered and leaves Zandvoort being the table topper of the Driver Championships, currently with a 3 point advantage, scant that it may appear, over the greatest Mercedes driver there’s ever been.

On to Monza now and hopefully for another closely-contested duel between two of the finest speedsters on the current grid.