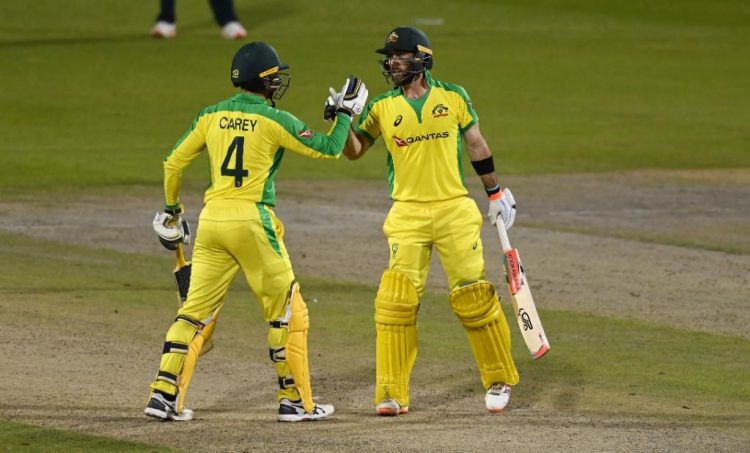 The 3-match ODI series was tied 1-1 and, going by the history of these two teams against each other, one would have expected the series decider to come down to a battle of nerves in the final stretch. And so it panned out under lights at the Emirates Old Trafford.

However, unlike the last match which Australia somehow contrived to lose from a position of absolute strength, they came out tops in a last-over finish on Wednesday.

While the Baggy Greens played the same XI that went down in the last game, England made one change to their team, with all-rounder Sam Curran making way for the return of tearaway Mark Wood.

Going with the conventional wisdom that batting first and piling up a huge score is deemed an advantage in pressure games, England captain Eoin Morgan won the toss and had no hesitation in making first use of the pitch.

However, the England innings was rocked early as a fiery Mitchell Starc sent back Jason Roy of the very first ball. The Surrey opener drove uppishly at a full ball outside off-stump only to find Glenn Maxwell at backward point. He failed to cash in on a reprieve of what should have been the first ball of the game. Starc got one to tail back sharply, catching him plumb in front. Though the on-field umpire promptly lifted the dreaded finger, replays showed Starc had overstepped.

Roy’s exit for a duck brought Joe Root to the crease but the Test skipper also lasted one ball as he missed another in-coming delivery to be caught right in front of the stumps. Adjudged leg before, Root did consider sending it for a referral but decided against it.

With two top batters out for no score, England were in a lot strife at 0/2 when skipper Morgan joined Jonny Bairstow in the middle. However, just when the pair looked to be repairing the innings, England lost their third. Morgan went aerial to a floater from leg-spinner Adam Zampa only to see it land safely in the bucket hands of Starc at wide mid-off. The skipper scored a polished 23 off 28 balls, with four hits to the fence.

While wickets fell around him, Bairstow seemed to be batting on a different surface, creaming boundaries at will and treating bowlers with contempt. Striding out to the crease at the fall of Morgan’s wicket, keeper Joss Buttler tried to raise a stand with Bairstow, but fell to an uppish drive off Zampa for 8.

At 96/4, England was in desperate need of a partnership and Sam Billings answered the team’s call as he raised a 114-run stand with Bairstow to put the innings back on the rails. Billings produced a swashbuckling 57 off 58 balls, with 4 fours and 2 sixes, before a reverse sweep off Zampa went straight to Mitchell Marsh at backward point.

The Yorkshireman, meanwhile, brought up a fine hundred, his 10th in this format, with 12 fours and a couple of hits over the fence. He eventually fell for 112, foxed by a fast off-spinner from Pat Cummins which beat his bat and crashed onto his stumps.

In reply, Australia had raced to 21 for no loss in 2.5 overs when Finch missed an in-coming delivery from Woakes to fall leg-before. With the addition of just 10 more runs, Warner departed for 24. Bowling his part-time off-spin, Root bowled one flat on middle and Warner missed a cut to  find his stumps rattled.

Soon, Australia slipped to 73/5 as Marcus Stoinis, Marnus Labuschagne and Mitch Marsh were sent packing in quick succession. While Stoinis fell to leading edge off Woakes to Morgan for 4, a smart piece of fielding by Billings saw the back of Labuschagne for 20. Marsh became Root’s second victim on the evening as a looped-up inside edge landed safely in Buttler’s gloves.

With half the side back in the shed, Australia looked down for the count, but the maverick Maxwell, in the company of stumper Alex Carey, mounted a spirited fightback that few would have seen coming. Both took the attack to the England bowlers and raised a partnership of 212 runs to put Australia in sight of victory. ‘Mad Max’ was the more aggressive of the two, striking 4 boundaries and 7 huge sixes on way to 108 off 90 balls. Attempting another big shot off a tossed-up delivery from Rashid, Maxwell holed out to Curran at short third man. It was a pity not to have a full house rising to Maxwell for a scintillating knock.

Carey, too, brought up a well-deserved ton, with 7 fours and 2 sixes. His innings, while taking Australia to the brink of a win, also silenced a rising chorus on his utility with the willow.

In trying to loft Archer, Carey hit straight down the throat of Wood at third man. He eventually fell for 106 off 114 balls.

The fall of Maxwell and Carey did introduce a tense phase in the game but Cummins and Starc held fort till the winning runs were scored with just 2 balls left in the final over.

Starc finished unbeaten on 11 and Cummins on 4.

While heroic fightbacks aren’t beyond Australia, the win at Old Trafford will surely rank among the best they have recorded in the ODI format.