Mayank Agarwal Has Shown That He Belongs To The Top Level 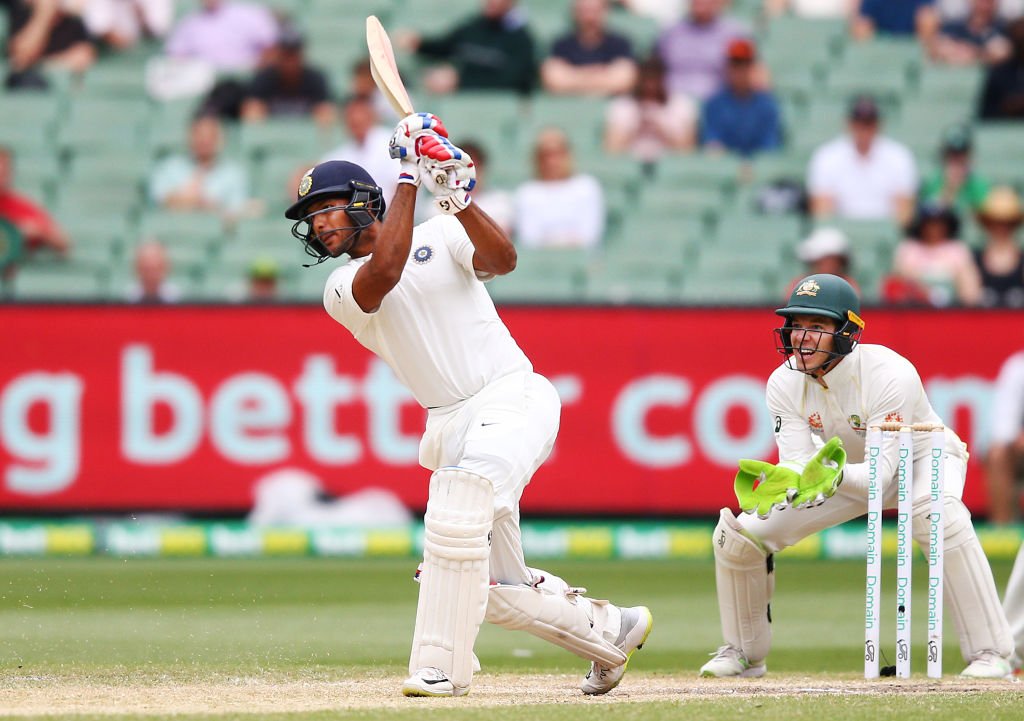 Mayank Agarwal’s eyes must have lit up when he made his debut in the third Test against Australia in Boxing Day Test in Melbourne. Mayank was perhaps the most deserving player of late to make his debut for India in the red-ball format. Three innings later, Mayank Agarwal has shown that he belongs to the top level.

Mayank has been the go-to player in domestic cricket for over a year. The Karnataka opening batsman had stitched many consistent knocks over the years. All that contributed to him being selected for the two-match Test series against the West Indies earlier last year. But Mayank was dropped after not getting a single game.

But his time arrived finally after luck rode his way. One can say it was meant to happen. The poor run of games for Indian openers KL Rahul and Murali Vijay created a vacuum and Mayank was asked to come and fill the same. Since he set out to bat against Australia at the MCG Test, Mayank didn’t look back.

He played a crucial role to help India win the Test match by 137 runs. India took a 2-1 lead in the series and Mayank impressed with scores of 76 and 42. His contribution was immense. It wasn’t just limited to the batting crease, but he showed his prowess as a sleek catcher as well.

Mayank won hearts all around and if that wasn’t enough, he got more affection after a top notch 77 in the first innings of the fourth Test at the SCG.

Here we analyse how Mayank stood tall and became the find of the series.

Mayank makes the headlines as a debutant

A positive and gritty Mayank walked into a sunny day in Melbourne and soon the strokes followed from his willow. The classy batsman stood tall and stitched two valuable stands and played freely when the moment arrived.

He was tested severely by the short ball, but Mayank took some blows and carried on. He registered the highest-ever score by an Indian batsman on debut in Australia. He saw off the new ball, something his predecessors in the first two Tests failed.

The 27-year-old Mayank added 40 runs for the first wicket alongside makeshift opener Hanuma Vihari. Mayank then held ground to set the base by stitching another 83 runs for the second wicket with Cheteshwar Pujara. The fluency of his innings showed the form he enjoyed all this while.

In the second innings, the player helped India get hold of a sizeable lead when the rest of the team was bamboozled by Pat Cummins. It was special from Mayank. India had found someone, who could chip in the goods overseas.

Heroics at the SCG puts weight to his credentials

Mayank showed that the performance at the MCG wasn’t a one-off affair. He wasn’t willing to let this golden chance go. The SCG was a much friendlier pitch for the batsmen and Mayank’s positivity stood out. He played more finer straight down the pitch and once again joined hands with Pujara.

The in-form batsman became the third Indian opener after Sunil Gavaskar and Prithvi Shaw to score two fifties in the first three Test career innings. He scored a valiant 112-ball 77. Mayank’s innings was laced with seven fours and two sixes.

His positive attitude once again came to the fore. And this time it was his application against a premier off-spinner like Nathan Lyon. He moved down the track and launched Lyon for two maximums. That was a statement of intent from the player on the opening day of just his second Test match.

Mayank was finally caught at long-on after trying to hit another maximum of Lyon. But by then, he gave everybody the indication that he is willing to go all out. He will be disappointed though as a century in Sydney was there for the taking.

Pujara needs to be lauded for Mayank’s show

Pujara has been India’s best performer with the bat in the series. It was a performance that showed his willingness to craft it out in the middle and be unfazed by everything else. Pujara had all the time in the world and he played a role in helping Mayank get the runs he eventually did.

Pujara’s stay in the other end helped the 27-year-old to play his natural game. Over course of two Tests, the duo added 83 and 116 runs together as a pair in both the opening day innings. These partnerships was the difference for India, which set the tone eventually.

Pujara’s wise words would have been like music to Mayank’s ears. The 30-year-old, who hit three tons in the series, had the calming effect on the Karnataka batsman.

Are we now settled for a Shaw-Mayank show?

A young Prithvi Shaw was the find for India in the opening slot last year. He was unlucky to miss out with injury in the Tests versus Australia. Shaw has done enough to cement his status as an opener in the side and is touted to be the next big thing in Indian cricket.

Now add Mayank as his partner. Wouldn’t this be a dream combination on offer? Shaw is a natural aggressive batsman, who can set the proceedings by destroying opposition teams. Mayank is also a natural positive player and the two players could join hands and give India the platform.

The success stories of Shaw and Agarwal have been a dream affair. It has been a story of sweat, instincts and determination. India have struggled to find stability atop especially in overseas conditions. KL Rahul was given a long rope, but he failed miserably.

Veteran Murali Vijay got a second chance, but he didn’t take it. And Shikhar Dhawan’s Test career looks over for now. So, we could now witness a long partnership between Mayank and Shaw. Both have played two Tests each and average 65.00 and 118.50 respectively.

India need to give as much confidence to both and make them comfortable under their own skin. With all the Test series awaiting India in 2019, we could see Virat Kohli’s side dominate the show.