The FA Cup defeat against Chelsea has exposed the brittle confidence of the Manchester United fanbase but one bad day should not undo the progress the club have made this season. 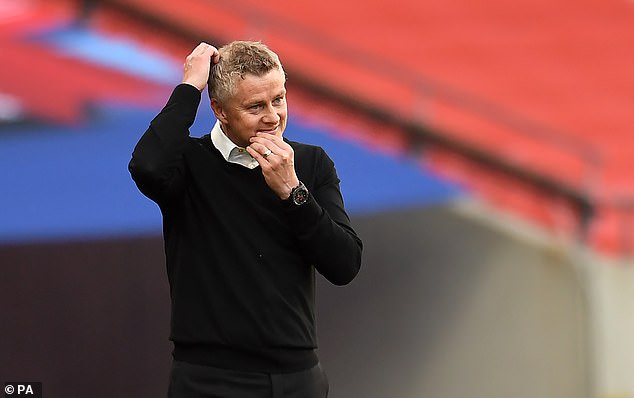 Manchester United have lokked like a well-oiled machine under Ole Gunnar Solskjaer since the turn of the year. (Image Credits: Twitter)

Manchester United were fifth on the Premier League table with 34 points, 14 behind Leicester City in third, with the Foxes also enjoying +21 goal difference gap with Ole Gunnar Solskjaer’s side.

Six months and 13 league games later, the two sides are level on points with the goal difference gap completely wiped out. The Red Devils will move into the top four on Wednesday if they even manage to get a point against West Ham at Old Trafford and will certainly finish in the top four if they beat Leicester City on the final day of the season.

Four points from their last two Premier League games will guarantee Manchester United‘s participation in the Champions League next season, a possibility that seemed fanciful when Burnley beat them 2-0 at Old Trafford in January.

But listening to Manchester United fans since the FA Cup semi-final defeat to Chelsea would have you think that the club are in dire straits, the defence are in complete shambles and the team are hurtling towards a disastrous end to the season.

It is the same set of fans who have seen their team beaten just once in their last 20 games in all competitions. Roy Keane once said a one-game run without a win at Manchester United was a crisis and he is right.

But I really hope the confidence of the players is not as brittle as their fans, then it would be a real crisis. Too many of the supporter suffer from the PTSD of the last seven years despite the green shoots of recovering becoming apparent with each passing week.

Give some credit to Ole Gunnar Solskjaer and his men:

There were times in the winter when it seemed Ole Gunnar Solskjaer was doomed at Manchester United. The results were poor, the performances looked uninspiring and they seemed like a club going through the motions towards another managerial sacking.

But the Norwegian has always been confident about the work he was carrying out behind the scenes. His decision to offload Romelu Lukaku and Alexis Sanchez last summer were bold as Anthony Martial and Marcus Rashford were not guaranteed to give you a 20-goal season, and Mason Greenwood was still an up and coming talent.

But he famously told United We Stand:

“I’d rather have a hole in the squad than an a**hole.”

Ole Gunnar Solskjaer stuck to his principles and his strike force has outscored the famous Liverpool trinity of Mohamed Salah, Sadio Mane and Roberto Firmino this season in less number of games and a lesser number of minutes played.

Solskjaer’s decision to build his team from the back has also paid off. I know Harry Maguire is not a popular man since the defeat at Chelsea but he has been a massive reason behind an improved defensive performance this season from Manchester United.

Manchester United have conceded 35 league goals this season, which is the joint second-best defensive record behind champions Liverpool. They conceded 54 in the 2018-19 campaign. Only West Ham conceded more goals amongst the teams who finished in the top ten last season.

It is very hard to insist that the former Leicester man has not made a difference at Manchester United this season along with right-back Aaron Wan-Bissaka. Can he improve? Of course, he can. Is he a complete defender? No, he lacks pace and needs a quicker partner than Victor Lindelof beside him. But Maguire has added a lot more to this team than he is being given credit for.

There is no doubt that Bruno Fernandes’ signing in the winter window has turned Manchester United’s season around. The Portuguese has added guile, flair and goals to the team from midfield.

Solskjaer has also managed to weave a midfield around him with Paul Pogba enjoying his new role as the conductor from a deeper position rather than given the role of being the only creative hub.

Nemanja Matic has been rejuvenated under Ole Gunnar Solskjaer when he seemed destined to leave in January. Fred has enjoyed his best season at Manchester United and Scott McTominay has continued to improve.

Ole Gunnar Solskjaer got his team-selection and shape wrong against Chelsea and paid for it. The rhythm was broken and Manchester United looked one-paced at Wembley.

But it is clear the manager prioritise beating West Ham at Old Trafford on Wednesday than making it to the FA Cup final. Is Champions League qualification more important than winning a trophy? Unfortunately, yes.

It is a sad reality of modern football and Louis van Gaal was sacked a day after he won the FA Cup at Manchester United in 2016. So, how can one blame Ole Gunnar Solskjaer to prioritise the last two league games over another Wembley appearance? His team have come too long a way since January to now miss out on finishing in the top four by a whisker.

The Manchester United manager is aware that it is now in their hands and four points from the last two league games and the Champions League anthem will again roar at Old Trafford next season.

The financial advantage of being in Europe’s top table also cannot be ignored amidst the current footballing landscape. It could mean having that extra amount of money to spend on more quality player in the summer.

And Manchester United are still in line with a trophy at the end of the season as they are still one of the favourites to win the Europa League.

Also Read: It’s not the end of the road for a player if they are sold by Manchester United