Hafeez and debutant Haider Ali shine with the willow as Pakistan end woeful England tour with a win. 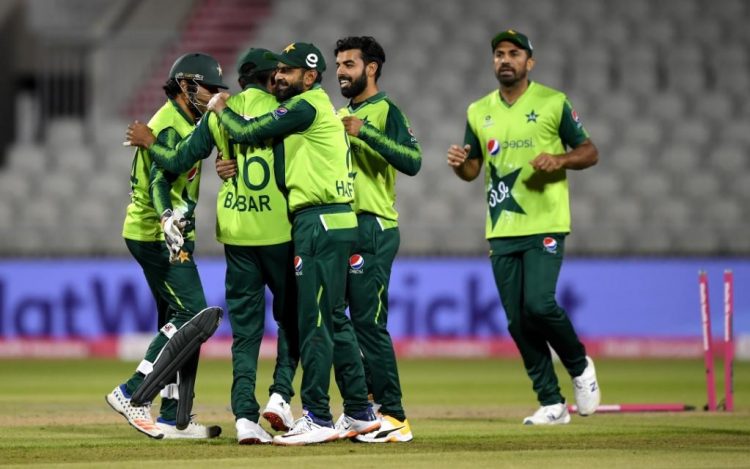 As the cricketing world has seen over the years, Pakistan, when pushed to the wall, can smite back like a wounded lion. And so it happened under the gilded lights at the Emirates Old Trafford on Tuesday as Babar Azam’s men ran out a more determined and self-assured unit and returned as victors.

With not much left to salvage in the series but pride, Pakistan made three changes to the playing XI, bringing in former captain Sarfaraz Ahmed in place of Mohammad Rizwan, veteran speedster Wahab Riaz for Mohammad Amir and young Haider Ali for experienced campaigner Shoaib Malik.

Two of them were like-for-like changes as Pakistan went in with more experience behind the wickets in Sarfaraz and better bowling form in Wahab.

Malik, who failed to come good in the last two games, made way for the 19-year-old who is seen as the next batting star for Pakistan.

Taking the confidence from the last T20I where England chased down a stiff target of 196 with relative ease, skipper Eoin Morgan yet again got the flip of the coin in his favour and invited Pakistan to bat first.

Wary not to tinker with a winning combination, England went in with an unchanged XI. They found success very early in the proceedings as Moeen Ali got one to spin past opener Fakhar Zaman’s bat and strike timber.

The southpaw, who scored a brisk 40-odd in the last game, couldn’t get his team off to a flier this time, falling for 1.

Fakhar’s exit brought Haider to the crease and the 19-year-old showed why he is rated so highly. With the assured presence of the skipper at the opposite end, the debutant threw caution to the winds and went after the bowlers.

Babar seemed to have got a measure of the bowling when seamer Tom Curran went through his defence with a ball that cut back sharply after pitching. The skipper scored 21 off 18 balls, with three hits to the fence.

Veteran Mohammad Hafeez, who lit up the empty stands with a whirlwind half-century in the last match, carried his ball-striking form into Tuesday’s encounter as he, along with Haider, took the England bowlers to the cleaners.

Bringing his experience into play, Hafeez not only got the scoreboard rattling along but also shepherded the 19-year-old through to his maiden half-century in this format.

His unbeaten 86 off 54 balls gave the Pakistan innings necessary impetus in the tail-end, helping them finish at 190. Though Haider lost his stumps to a peach from Chris Jordan for 54, Hafeez, with a late order flurry from Shadab Khan (15 off 11) and Imad Wasim (6 off 4), took Pakistan to a competitive total.

It was a different Pakistan attack under lights as left-armer Shaheen Shah Afridi bowled Jonny Bairstow with a sharp in-swinger. The explosive keeper-batsman, who got England off to a flying start in the last game, fell for a duck.

One wicket led to a couple more as Dawid Malan, who took England home with an unbeaten fifty in the 2nd T20I, fell cheaply along with Morgan. While the former fell to a stunning catch by Fakhar on the boundary line off Imad, his skipper lost his wicket to a piece of misjudgment.

Morgan hit a ball towards the cover region and took off for a single. However, Banton, on the opposite end, stood rooted to his crease as the fielder ran in to mop up. The fielder rifled in a throw to Sarfaraz who took the bails off in a flash.

It was a key moment in the game for Pakistan as it was Morgan who took England within touching distance of the target with a typically aggressive innings.

Though Banton tried to make up for his mistake, he was trapped leg before by Haris Rauf for 46.

Moeen Ali, in the company of Sam Billings, did try to raise England’s hopes of a win but the innings was dealt a further blow when the latter lobbed a catch to Imad off Wahab.

The veteran southpaw, who had been having a quiet series with the willow, exploded just when his team needed him to. However, his blitzy 61 off 33 balls, with four boundaries and the same number of sixes, couldn’t take England to a win. He eventually departed, offering a catch to Wahab off his own bowling.

Though a late-order blast by all-rounder Lewis Gregory (12 off 8) and Curran (8 off 5) threatened to take England to a win, the Pakistan bowlers effected crucial blows to close out the game in their favour.

The game eventually got a lot closer than Babar would have liked, as, with 12 to get off 2 balls, Curran launched Haris Rauf into the stands. However, the tearaway came back brilliantly with a dot ball, as England finished just 5 runs shy of the target.

While Wahab was the standout bowler for Pakistan, picking up crucial wickets late into the England innings, Afridi sent back Bairstow during a sharp opening burst and later returned to claim another wicket. They both finished with two wickets apiece.

While the series was tied, the Pakistan dressing room was happy and relieved to have posted their first win on the tour.