Pak has never beaten India in any T20 world cup contest. Does this stand to change this time around? 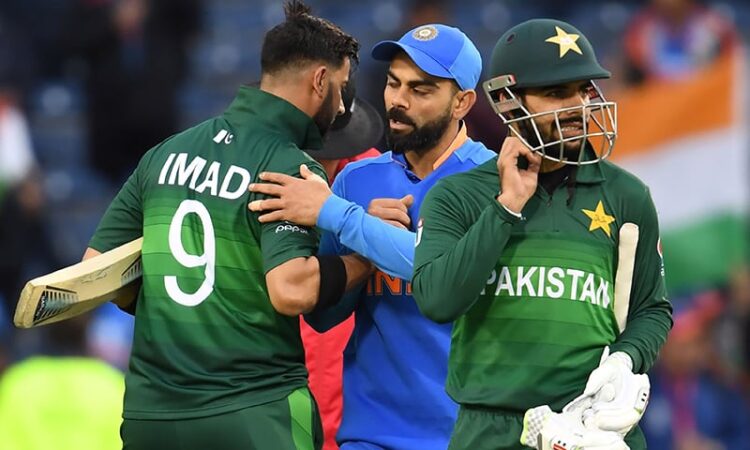 Credits: (Photo by Dibyangshu SARKAR / AFP) / RESTRICTED TO EDITORIAL USE (taken from Twitter)

Pakistan will look to reverse history as it takes on India in what’s due to be a massive campaign opener for both teams in the T20 World Cup 2021. The side known for being passionate and resilient will look to draw inspiration from a slice of truth that can only hurt and could thus, spur it to greatness this time around in the T20 world cup 2021.

And it’s that up until now, Pakistan has never defeated India in a T20 world cup contest.

Even today, nearly a decade and a half since the famous T20 2007 contest between the two, both teams are looked at as being huge inspirers of crowds and sides whose mere presence fills stadia around the world.

But it’s exactly here in this void, emphasised by a lack of victory where Babar Azam and his team will be motivated to script its own little history.

Talent- there’s plenty of it with Pakistan, much like always. But, its application and ‘holding the nerve,’ as they say, will be what the famous sub-continental force will look to do as Virat and Babar will lead their respective sides to what, in all likelihood, will be a cracker of a contest.

Unless one side simply squabbles under pressure failing to hold its never when most needed.

Having said that, there’s hardly a doubt about the prowess Pakistan brings to the fold, in a renewed attempt to lock horns with an archival that, truth be told, is looked at as a figure of inspiration, not necessarily ‘envy’ as depicted by yellow journalism on both sides of the border.

Second on the ICC men’s batting rankings at the moment, Babar Azam (2,204 with 1 T20I ton and a strike rate of 130) is someone who’s an inspiration to his entire team.

A calm leader who doesn’t buckle under pressure, thanks to Babar Azam, Pakistan’s leadership template today is one that’s driven by coolness and the ability to withstand crisis instead of being determined by it.

That it was under Babar Azam’s captaincy where his Pakistan side beat its host West Indies earlier in July suggested that the traveling force wasn’t there in the Caribbean to simply lay low and take it easy.

That in its last warm-up contest, Pakistan defeated the West Indies without much ado, with captain Babar scoring a 41-ball-50 and Fakhar Zaman contributing with a gutsy 46 off just 24 suggests the team due to face India is high on confidence.

Forget the West Indies languishing at nearly the bottom of the ICC T20 world rankings, being positioned on ninth, that Pakistan won the contest against the defending champions with 27 deliveries to spare should signal India that this side is no lame pushover.

With freewheeling batters with a history to torment opponents without much ado, think Fakhar Zaman (1,021 T2oI runs, 48 innings, 5 fifties, S/R 130+) and the rising force in Mohammad Rizwan, Pakistan looks a side competent- if not unquestionably brilliant- enough to tackle India.

Talents like Faisalabad’s Asif Ali, among the most promising batters alongside the evergreen Shoaib Malik- the Shoaib who doesn’t lament things but simply endures challenges with that winning smile- Pakistan brings to the fold the alliance of the youth and the experienced.

Meanwhile, Sargodha’s greatest export to the national team, a talent that deserves to be hailed as Pakistan’s national treasure- Mohammad Hafeez will carry the hopes of millions to bring something special to the table.

Can you- rather, will you- ever undermine a batter with 2,429 runs against his name including 60 wickets, at an economy of 6.5?

If there’s ever an opportunity for the timeless right hander to stamp his authority as one of the greatest limited overs cricketer Pakistan’s ever produced then the T20 world cup 2021 contest against India is that chance.

Moreover, in Shaheen Shah Afridi, who’s got vicious pace as also a probing slower delivery, the latter that he’s still developing to good effect, Pakistan has a force to reckon with.

To add more bite to a really sorted bowling department, there’s the often under-appreciated Imad Wasim- 51 dismissals from as many bowling innings, not to forget a stellar economy of 6.4.

And yet, what box Pakistan would still quite like to tick is that of big match temperament

So does that mean the team can’t hold in together in big match situations?

On the contrary, it’s sides like Pakistan, bold and aggressive, that can shake up any opponent under the sun.

Remember the way the visitors hammered the West Indians in West Indies? Who can forget the 2017 Champion’s Trophy title triumph at London’s Oval.

In a sport determined by fine margins, bashing India by 180 runs, this was the very Pakistan that’s often represented as ‘little brother’ in media when what it achieved, at the end of sobering its sub-continental archival, was no tiny feat.

However, what Pakistan will look to counter, rather control is the loss of focus when the going gets tough or when challenged meanly by an opponent.

A great reference to context would be the 2019 men’s world cup loss suffered against the West Indies side, a batting-heavy unit that managed to restrict Babar’s men to 105 and that too, inside the 22nd over.

Who would’ve thought that such a thing would have happened with 28 overs left to bat going down the drain?

Pakistan’s fierceness and competitiveness stems from the fact that this is a team that plays well together. It’s not a caterer to the usual mindless wham-bam T20 culture where one basher steers the crowd and in effect, the entire unit.

However, Pakistan’s weakness seems to be in that it doesn’t always know what will it turn up with on the 22 yards on any given day; will it make the sea volatile with hostility of its talents or will it become the hunter who gets hunted at the very back of a tiny collapse or its inability to stay calm?

Regardless, that it’s Pakistan versus India, a contest sufficiently hyped, perhaps overzealously too, will make it interesting enough for both teams to bring their A-game to the field.