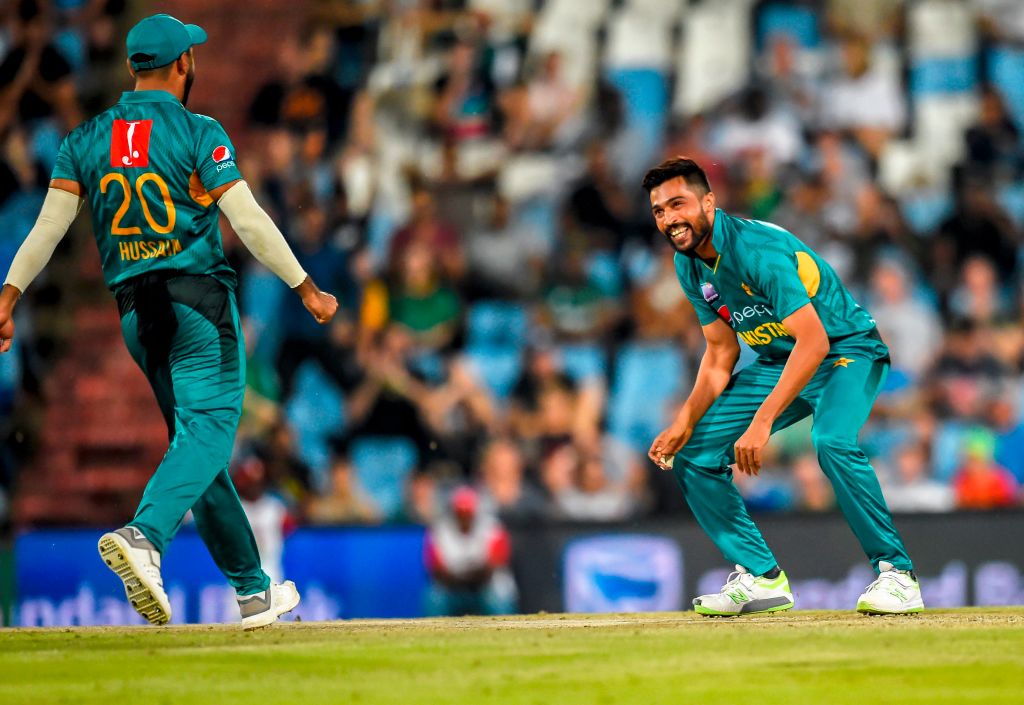 Asian giants Pakistan announced their 15-member squad for the upcoming ICC World Cup 2019 to start from May 30 onwards in England and Wales.

The major surprise was that of left-arm fast bowler Mohammad Amir being omitted from the preliminary squad. But the pacer has been included for their ODI series against England.

A fine showing there could see the pacer come in the plans.

Besides Amir, big-hitting Asif Ali was also left out of the side. And like the pacer, he is a part of the 17 players to face England in the ODI series leading to the coveted event.

Both could yet feature in the global tournament, with Pakistan having time until May 23 to finalise their squad.

Amir was the star player for Pakistan during the last time the side visited England, when he claimed the Player of the Match award in the Champions Trophy final in 2017.

Since then he has witnessed a fall from grace as he went wicketless in nine out of 14 ODIs played since. He averaged a disastrous 92.60 with the ball.

However, the focus will be on the series against England as Pakistan will be wanting to make a statement of intent after a 5-0 whitewash suffered in the hands of Australia last month. Elsewhere, back-up opening batsman Abid Ali was preferred to Shan Masood.

The former has played only two ODIs, both in Pakistan’s recent clean-sweep by Australia, and scored a hundred on debut. The latter also debuted in that series, and made a half-century in its final game.

Mohammad Abbas, Mohammad Nawaz, Mohammad Rizwan, Usman Shinwari and Yasir Shah are the other players named in a list of 23 probables to miss out.

Pakistan have gone in with two teenage pacers in the form of Shaheen Afridi and Mohammad Hasnain. Chief selector Inzamam-ul-Haq defended his decision to go with the latter.

He said, “Hasnain has been selected due to his sheer pace and speed. He may not have played many ODIs but he has already made an impact by making the top batsmen hop and run in his brief career while also picking up wickets.”

Pakistan have an experienced squad to deal with in the 2019 World Cup. The batting looks decent and the bowling in particular is their major strength. Here we analyse the Pakistan squad ahead of the Cricket World Cup 2019.

Pakistan have the flair in top order

Imam-ul-Haq is Pakistan’s main asset in the opening department. The southpaw will need to be consistent. He has been consistent for Pakistan in the 24 ODIs played.

The opener has a strong average of 54.90. He has already slammed five hundreds and five fifties. His principle role will be to play as an anchor and bind the side.

Joining him upfront is the explosive Fakhar Zaman. He can be inconsistent at times, but he stood out for Pakistan in the ICC Champions Trophy in 2017. Zaman’s aggressive nature could bolster the side in getting those brisk starts at the beginning.

He will need to handle the responsibility well. The Asian team has the back-up in Abid Ali, who doesn’t have experience under his belt. But he has the temperament as seen against Australia in his debut match.

The main focal point for the side is Babar Azam. The talented cricketer will hand the responsibility at number three. Azam will need to score the runs on a consistent level.

He averages a commendable 52.19 with the bat. A lot of hopes will be pinned on Azam to steer the side against quality sides in the World Cup.

There is the desired experience in middle order

Pakistan have included two very experienced players, with each of Shoaib Malik and Mohammad Hafeez in the middle. The two have been part of World Cups earlier and they know what’s expected out of them.

The two cricketers have seen it all, and can offer vital guiding hands to the youngsters in the squad.

The two have over 14,000 runs between them in ODI cricket which says plenty about them in terms of lending a matured voice.

“Shoaib Malik and Hafeez have played in World Cups before, which makes them experienced and qualified to provide the required stability to the middle-order,” said Inzamam.

Skipper Sarfaraz Ahmed lends the voice in the middle as well. He will be required to get the intensity level high and chip in during the middle overs and also at the death.

30-year-old Haris Sohail is a busy customer and will be required to bring in the balance to the side.

Faheem Ashraf and Imad Wasim are two handy all-rounders and can accelerate at the death in the lower middle order.

Bowling is the strength for Pakistan

Pakistan have included the teenage fast-bowling duo of Hasnain and Afridi. Recently, veteran all-rounder Shane Watson described the former as the fastest 18-year-old he’d ever faced during the Pakistan Super League (PSL). The latter has grown to become a vital cog for the team.

Afridi has taken 32 wickets in 19 limited-overs internationals until now, at an average of less than 20. He will be pivotal for the side in terms of getting key wickets upfront. He will look to extract help from the conditions.

Hasan Ali is the strike bowler for the side. The experienced campaigner took 19 scalps in 2018 and has a nagging line and length. His accuracy is defined by his career economy-rate of 5.25.

Junaid Khan is another seasoned player. He has 108 wickets from 74 ODIs at an outstanding rate of 5.28.

Shadab Khan is the primary spinner of this team. He has 47 wickets from 34 ODI matches. The right-arm bowler had an excellent 2018.

He was the highest wicket-taker for Pakistan last term with 23 scalps to his name. His role will be immense during the middle overs. He will be supported by Malik and Hafeez, besides Wasim.

Ashraf can bowl medium pace and is a regular in the team. “We have experienced bowlers with plenty of variety and variation to exploit any type of conditions,” said Inzamam.