Performances in the Ranji Trophy, the premier domestic cricket tournament, has been one of the major selection criterion to the Indian team.

Saurashtra claimed the 2019-20 season of the coveted tournament , defeating Bengal by the virtue of their first inning lead.

The title being the first for the Rajkot based association in over 8 decades of the tournament’s history. Just like its previous seasons, the recently concluded seasons, saw brilliant batting performances. A number of players piled on tones of runs in this season and who with their eye popping performances .

This Ranji season was dream come true for the 28 year old, Rahul Dalal. Playing for Arunachal Pradesh, Dalal showcased impeccable skills to end the tournament at the helm of the season’s highest run scorers.

He started the tournament with a breezy 81 against Chandigarh and backed it up with twin hundreds in the match against Mizoram to get his tournament off with a bang.

His unbeaten 267 in the first innings against Nagaland was one of the highlight of the tournament. He then scored a brilliant 190 against Bihar, helping his team post a competitive total in the first innings. His performance has certainly put him in contention for a Indian national contract.

Bowlers Who Dominated the Ranji Trophy 2019-20

DRS: A Success in Knockout Of Ranji Trophy 2020

Taruwar Kohli was the part of the Indian U-19 squad that won the World Cup in 2008. He is a promising batsman, over the years has given some breath-taking performances.

Unfortunately, Kohli didn’t got his opportunity at the highest level but his performance in this year’s Ranji Trophy might well be a boost to his chances.

Kohli ended the tournament as the second highest run getter with 998 runs at an average of 71.28 with 3 tons and 5 fifties.

Playing for Mizoram, Kohli, just like Rahul Dalal got off to a brilliant start, scoring a magnificent triple hundred against Arunachal Pradesh in his second match of the season.

He then scored back to back hundreds against Sikkim and Nagaland and followed up with half centuries against Chandigarh and Goa to end the tournament on a high. Kohli also proved vital with the ball, picking up 14 wickets 9 matches.

Puneet was another batsman that made merry on the flat Indian wickets, ending the tournament with 976 runs with 2 tons and 6 half centuries at an average of 69.71.

Bisht made an immediate impact on the tournament, notching up a masterful 125 against Nagaland in his first innings of the season.

He then played some crucial innings for Meghalaya before ending the tournament with a daddy hundred against Arunachal, leading his team to an impressive victory by an inning and 248 runs.

Paras Dogra was one of the most consistent performers of the 2029-20 Ranji season. He was the mainstay of his team’s batting with satisfactory scores in almost every match he played.

He notched up his first hundred (117) of the season against Sikkim and followed it up with a magnificent 200. Dogra demolished Goa with a scintillating 194 before ending the tournament with another marathon inning of 175 against Nagaland.

At 35, Dogra has showed tremendous determination and will to perform even when his chances to represent India is minimal.

Sarfaraz Khan was arguably the best batsman of this season’s Ranji Trophy.

Sarfaraz, who ended the tournament with the highest averages, scored 928 runs in the 9 innings of the 6 matches he played for Mumbai.

Sarfaraz was once knocking the door of the Indian national team but lack of form and poor fitness lead to his ouster from the queue.

He continued his dominant run with a magnificent 177 against Madhya Pradesh, ending a dream tournament.  This performance from Sarfaraz might well turn out to be a turning point in his career.

The 32 year all rounder from Bangalore, Amit Vera was another top performer in this year’s Ranji Trophy. Verma, who notched up 848 runs in 10 matches with 4 hundreds and as many half centuries started the tournament with a classy 113 against Sikkim.

He second hundred(121) of the tournament came against Puducherry. Hundreds against Arunachal and Mizoram ensured that the tournament was a success for Amit Verma.

Along with his batting, Amit was equally good with the ball, picking up 43 wickets including 4 five wicket hauls.

Harpreet emerged as the best batsman for his team, Chattisgarh, piling 838 runs in 11 innings of the 8 Tests at an average of 83.80 including 4 hundreds and two half centuries.

Singh has an average start to the tournament but picked up the momentum in the latter half, notching up 4 hundreds in his final 6 innings of the tournament.

Over the years, it’s been a platform which has given some of the biggest names in Indian cricket.

Very recently, Mayank Agarwal, the current Indian test opener, pushed his way through successive years of outstanding performance in the the Ranji Trophy. 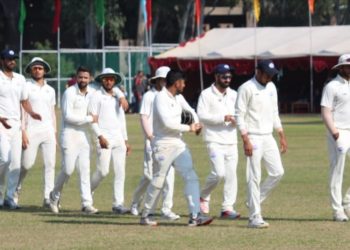 Bowlers Who Dominated the Ranji Trophy 2019-20

DRS: A Success in Knockout Of Ranji Trophy 2020