A look at what to expect from Real Madrid in the 2020/21 La Liga campaign. 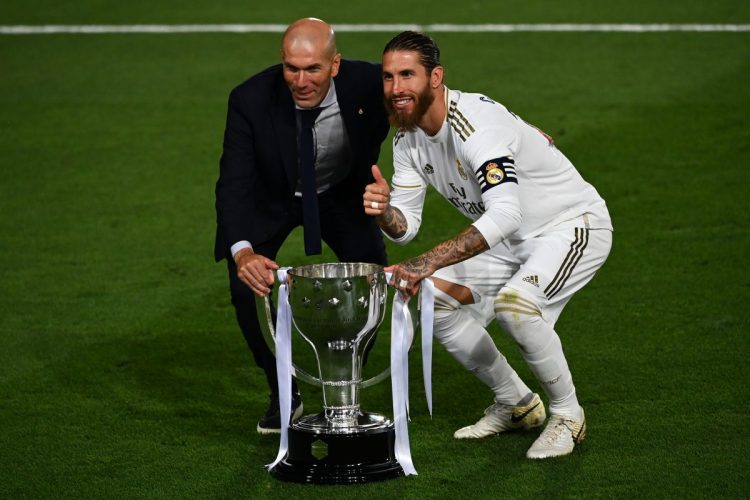 The 2020/21 campaign is already underway in the Spanish first division. The holders, Real Madrid, however, are yet to kick the ball. The privilege isn’t due to their exemplary heroics in Europe — which Paris Saint-Germain and Bayern Munich probably deserved.

It’s all down the COVID-enforced postponement of their Champions League Round of 16 second leg against Manchester City. The 2-1 defeat — 4-2 on aggregate — capped off a domestically successful season for Los Blancos, and it’s time to start anew.

When Zinedine Zidane returned to the helm in 2019, he vouched to lead Real Madrid to domestic supremacy. And in the first full season after returning from the premature sabbatical, the Frenchman managed to fulfil in promise, comfortably. This season, too, the ambitions would pretty much be the same — bag another La Liga, put Barcelona under more pressure.

Real Madrid’s biggest rivals, Barcelona, are already in ruins, trying their best to put on a brave face. Atletico Madrid, on the other hand, appear stronger than the Blaugrana, but their mentality in La Liga hasn’t always been the best.

All factors accounted, Real Madrid are set to start the 2020/21 campaign as the favorites to defend their La Liga title, but Zidane cannot afford any slip-ups this time around.

Real Madrid have not signed a single player in this transfer window and are unlikely to do so. Some reports have linked Lautaro Martinez with an unexpected move to the Santiago Bernabeu, but the club aren’t likely to break the bank for a player they don’t necessarily need.

The Whites have only recalled their loanees and are set to trust some of them for the coming campaign.

Martin Odegaard: The young Norwegian is an exciting prospect for the Merengues and is expected to enjoy considerable game time under Zinedine Zidane.

Andriy Lunin: Lunin is a like for like replacement for Alphonse Areola and is set to play second fiddle to Thibaut Courtois.

Sergio Reguilon: The Spanish international is one of the hottest prospects in the market right now, but he is unlikely to stay with Ferland Mendy and Marcelo already occupying the left-back position.

Alvaro Odriozola: After Achraf Hakimi’s departure, Odrizola has been brought in to provide cover for the first-choice right-back, Dani Carvajal.

Borja Mayoral: The player has returned to Real Madrid from Levante but is unlikely to extend his stay in the Spanish capital.

With a new stadium underway, Real Madrid need as much money as they can muster. They have already parted ways with James Rodriguez and now, they are working to offload Gareth Bale as soon as possible.

Sergio Reguilon has been linked with a move to Premier League club, Manchester United, while Bale, too, could move to Old Trafford on a season-long deal. The duo are also being courted by Jose Mourinho-managed Tottenham Hotspur. Mariano Diaz could also end up leaving Real Madrid but there aren’t many offers for him at the moment.

Last season, Real Madrid exhibited exemplary discipline and determination to beat Barcelona to the La Liga title. They have a capable midfield, a solid defence, and an in-form Karim Benzema to get them out of jail.

Above all, they have the brilliance of Zinedine Zidane at their disposal. The Frenchman knows every nook and corner of Real Madrid and is never hesitant to call the shots. If he follows his gut and treats every big game as his last, Real Madrid are set to enjoy another fruitful campaign.

Real Madrid banked on their best-in-Europe defence to win La Liga. They were heavily lauded for their defensive prowess, of course, but they often had to rely on the oppositions’ mistakes to win matches.

This season, they must look to find the back of the net on a regular basis and reduce the strain on the Real Madrid backline. Eden Hazard, Vinicius Jr, Rodrygo, Luka Jovic, and Marco Asensio must keep themselves fit and lend Karim Benzema a helping hand.

It might seem like an unusual choice, but Sergio Ramos could be the key man for Real Madrid next season. Without Ramos leading the charge, Real Madrid almost always look out of sorts and regularly concede unnecessary goals. He is also a force to be reckoned with in the opposition box and can pop up with crucial goals when needed.

Above all, Real Madrid need the guidance of their veteran captain as they embark on a journey to seize their second La Liga title on the spin. He needs to remain fit, keep himself out of silly fights, and make sure he extends his purple patch to another season.