All you need to know before Real Madrid host Real Valladolid for their first home game of the 2020/21 La Liga campaign. 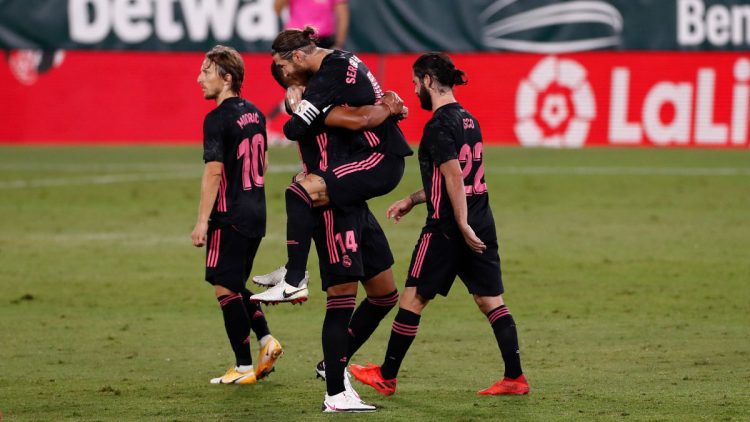 Having played out a goalless draw in their opening La Liga encounter against Real Sociedad, Real Madrid finally returned to winning ways last Saturday at Real Betis, courtesy of a 3-2 triumph.

The match, which saw the defending champions travel to Seville, was far from a comfortable affair for Zinedine Zidane’s men and required a special Sergio Ramos penalty to settle the affair.

Los Blancos found themselves 2-1 down despite scoring the opener through Fede Valverde. They squandered an abundance of chances and could only manage to get themselves the winner after the hosts were reduced to 10 men.

The midweek fixture is expected to be a more comfortable affair against an out-of-shape Real Valladolid outfit.

Read on to get a quick round-up of the midweek La Liga encounter.

Real Madrid and Real Valladolid have a lot of respect for one another and always manage to show that on the pitch. Real Madrid, as expected, have thoroughly dominated the fixture since the very beginning, but Valladolid are known to steal a point or two every now and then.

In their last three meetings, Real Madrid managed to outwit Valladolid on two occasions and shared spoils on the remaining match. The 0-1 and 1-4 wins came on either side of a 1-1 draw.

Neither Real Madrid nor Real Valladolid have managed to put their best foot forward in the 2020/21 La Liga campaign. While the hosts have picked up four points from their two matches, Valladolid are still without a win after three attempts.

Real Madrid, once again, were without the services of Eden Hazard, Mariano Diaz, and Marco Asensio, last weekend. This week, they will have to do without midfield maestro, Toni Kroos, who succumbed to a hip injury against Betis.

Marcelo, too, has reportedly suffered a training injury and could miss the match.

Hazard and Asensio did train with the squad, but they could be saved for the weekend’s trip to Levante. Mariano and Militao are also not fit to feature.

Like Wednesday’s hosts, the visitors, too, have a bunch of absentees to deal with. Javi Moyano, Joaquin Fernandez, Kiko Olivas, Moctar Sidi El Hacen, Ruben Alcaraz, and Sekou Gassama are all out with various muscular, knee, and hamstring injures, while Jordi Masip was tested positive for COVID-19.

Masip should be cured by Tuesday but remains a doubt for the match.

Real Madrid vs Real Valladolid: Where to watch

Considering their recent forms and Real Madrid’s La Liga pedigree, it’s hard not to announce the hosts as the clear favourites. Zinedine Zidane’s men haven’t been in fine shape, of course, but they have already shown the ability to grind out results even on a bad day.

They were toothless against Sociedad in the first fixture, but performed a lot better — offensively, at least — away at Betis. They often need that spark to get going, and when they do, it’s rather difficult to stop them.

With an average of only 0.67 goals since the start of the season, Valladolid have a rather task ahead of them this Wednesday. They’ll have to rely on individual talent and Real Madrid’s defensive lapses to get on the scoresheet, and they must make sure not to squander chances if and when they present themselves.

It probably won’t be a walk in the park for Real Madrid, but we can’t see anything but a convincing win for Zidane’s champions.