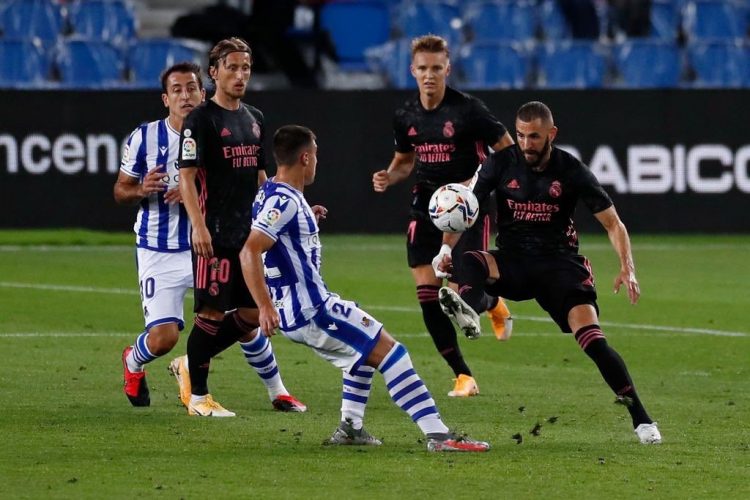 90 minutes later, they walked away sharing spoils with the hosts, playing out an unusual goalless draw against the Basque outfit.

The champions were determined to put their best foot forward, and they certainly failed to do so in Sociedad’s feared backyard.

Without Eden Hazard, Marco Asensio, Isco, and Lucas Vazquez in the squad, coach, Zinedine Zidane was forced to experiment and fielded an unusual midfield trio of Luka Modric, Toni Kroos, and the ever-so-charming Martin Odegaard.

Casemiro’s exclusion turned heads, but the Frenchman was probably saving his Brazilian central defensive midfielder for a rainy day. Up top, Karim Benzema was flanked by Vinicius Jr and Rodrygo on the left and right, respectively.

The result wasn’t mind-boggling by any means, but there were still some hopeful and alarming revelations.

After spending a season at Anoeta, Real Madrid youngster, Martin Odegaard, was finally called back home, to the Santiago Bernabeu.

The highly-rated Norwegian midfielder is tipped to play a significant role at Zidane’s Madrid this season, and Sunday night was the ideal stepping stone for the youngster.

Allowed to sit on top of a midfielder triangle, Odegaard was meant to be Los Blancos’ primary creator. He didn’t take much time to settle in and was eager to get on the ball right from the first moment.

His passing range was diverse, and he didn’t hesitate to get his hand dirty. Aerially, too, he proved to be quite a handful for La Real defenders and helped Madrid win the ball on multiple occasions.

He tried to link up with Rodrygo and Vinicius, but the chemistry was hardly worth writing home about. However, every time he linked up with Benzema, he looked a lot more menacing.

The match ended in a disappointing 0-0 draw, of course, but Odegaard more than made his first starting XI appearance count.

#2 Defence picks up where it left off

Last season, Real Madrid conceded only 25 goals in the Spanish first division, emerging as the best defensive side in Europe.

Their insane defensive discipline allowed them to steal the league title under Barcelona’s nose, who scored 16 goals more than Zidane’s champions.

On Sunday night, Real Madrid were required to borrow a page from last season’s playbook, and fortunately, they didn’t disappoint on that front.

Raphael Varane, Dani Carvajal, Ferland Mendy, and Sergio Ramos snuff out the danger on most occasions and kept Sociedad attackers under wraps.

However, despite their brilliant structure, they were outsmarted a couple of times by the opposition attackers. Thankfully, the new Real Madrid number 1, Thibaut Courtois, never looked like conceding his clean sheet.

Without Casemiro guarding the defence, Real Madrid had a harder time than usual, but the stalwarts at the back were successful in securing a point for their side .

In the 2019/20 campaign, Real Madrid striker, Karim Benzema, handsomely emerged as the most influential forward for the Whites.

He was still beaten by Lionel Messi in the Pichichi race, of course, but his contributions were widely recognized. Luka Jovic, Eden Hazard, and Gareth Bale practically did nothing to help the Frenchman out.

And this season, too, the Real Madrid number 9 looks alone and miserable in the final third.

Brazilian pair, Vinicius Jr and Rodrygo flanked Benzema on Sunday night, but the linkup play was nowhere to be seen.

The Frenchman was on the receiving end of two pretty decent chances but failed to make them count. With Hazard and Asensio out, Real Madrid are bound to struggle in the final third of the pitch.

And now, it’s up to Zidane to find a way out of this mess. Maybe it’s finally time to give Borja Mayoral and Luka Jovic the chances they deserve.