Real Madrid will begin their 2020-21 La Liga campaign with an away fixture against Real Sociedad. 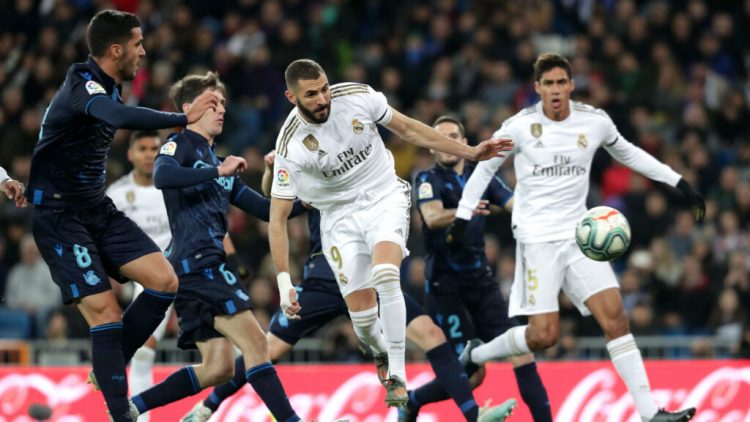 Real Madrid will take on Real Sociedad in their first La Liga game of the season. (Image Credits: Twitter)

After sitting out the first matchday of La Liga, defending champions, Real Madrid, are prepared to step into the ring. Their opponents on the matchday 1 of the Spanish top-flight is none other than the ever-so-challenging, Real Sociedad.

With a rich history of putting Los Blancos in trouble, Sociedad would look to steal some points off the visitors on Sunday night.

Real Sociedad drew their season opener 1-1 at Real Valladolid last weekend. However, with champions coming to town, expect them to put their best foot forward.

Los Merengues, on the other hand, would hate to play catch up with Barcelona right from the first gameweek and would be determined to put three points on the board.

Real Madrid and Real Sociedad have quite a history. Los Blancos, of course, have been the more dominant team of the two, by far. But Real Sociedad, so far, have made sure not to give Real Madrid an easy way out.

The two have battled it out 38 times so far. Sunday’s hosts, Real Sociedad have managed to win 8 times in total, while 6 games have turned out to be a draw. Los Blancos have won 24 games against Real Sociedad — a testament to their dominance in the league.

Sociedad, despite being the smaller side, have an edge over Madrid in the last five matches. In the last five fixtures, Socieded won three, with Real Madrid only bagging the maximum points on two occasions.

Both Real Sociedad and Real Madrid have a knack for performing well in the big fixtures and should give us an exciting clash on Sunday.

Real Madrid and Real Sociedad have been waiting impatiently for this fixture and are expected to field their best XI on Sunday.

Against Valladolid, Real Sociedad suffered quite a lot on the creative front. Despite being the better team on paper, they failed to nick the winning goal, and came home with a single point.

Lack of creativity shouldn’t be the problem with Manchester City legend, David Silva, primed to make his debut for the Anoeta outfit.

Luca Sangalli, Asier Illarramendi, Martin Zubimendi, and Martin Merquelanz will once again miss the tie due to injuries, while Willian Jose remains on the doubtful list.

Real Madrid could play the first away game of the season without some of their key players. Given the depth they have in their squad, they won’t actually be lost without them, but their absence would surely be felt.

Eden Hazard, Marco Asensio, and Isco — all three have not been a part of Real Madrid exhausting training schedule lately and are believed to be a little below their usual standards.

They could still be included in the matchday squad, but that seems unlikely at this point. Luka Jovic has also been in and out of the team training sessions and could sit this one out.

Mariano Diaz has had tonsillitis surgery and will miss the match. Eder Militao, who picked up a knock in the friendly win over Getafe also remains a doubt.

Real Sociedad vs Real Madrid: Where to watch

The defending champions have their work cut out for them on Sunday. Without some of their key players, coach Zinedine Zidane would have to rely on his decorated bench to see out the storm.

Los Blancos know they have the quality, but their recent record against Sociedad is hardly encouraging. The hosts would like to hit nice and early to put pressure on Zidane’s men. And with Silva pulling the strings, it won’t be unusual to see them on the scoresheet.

We expect the match to be close, with Madrid just edging Sociedad to take home the three points.