Relive: “The Endless Match” at Wimbledon-Part 2

We pick up from where we left, the Day 3 of "The Endless Match", finally puts an end to the battle between John Isner and Nicholas Mahut. 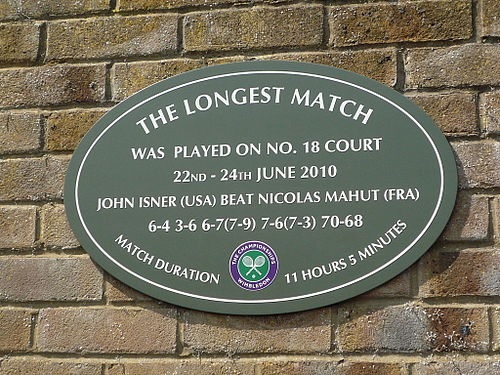 Here is the Part-2 of the series:

The players came out again. This time hoping to put an end to the match. At 68-68 in the fifth, Mahut went up 0-30 on Isner’s serve, but the American came back with a 135mph ace.

He won consecutive points and held his serve. But this time Mahut struggled and finally at 30-40, Isner hit a passing backhand, down-the-line,  and that ended the match.

Isner threw the racket and ecstatically flattened himself on the grass with his legs up, almost as if his body couldn’t contain the cheer. He had won a battle. Not exactly how a tennis match should be, but the 3-day match was a memory for a lifetime, for the player and the spectators.

The players had created history. It was with confidence that the commentators declared that no match ever shall be played that will be this long! The total time spent on the court was 11h 5minutes. It was exceptional to see an extraordinary level of tennis for all three days.

It’s ironic that at the end of the match, Lahyani, the chair umpire, announced the score incorrectly. He accidentally switched the scores of the two tie-break sets. But nobody minded that, for history was in the making.

Right after the match, rightfully, the players were applauded and their efforts acknowledged by the All England Club that provided them with a huge decorated box as a token of appreciation.

The Obstacles With The Scoreboard

On 23rd June, the scoreboard failed at 45-45 as IBM had only set it up for that number. Therefore, the next day it had to be reconfigured to show the correct scoreline. Even the technology failed to register, the magnificent game of tennis that was in play.

After the match ended, both the players and the umpire clicked a photograph with the score-line. This just hints at the failure of the organization, to expect a standard of tennis they are not equipped to handle.

The Greatest Advertisement For Our Sport: McEnroe

Former players and commentators have called the match historic and unlikely to happen again; many also praised both participants.

“This is the greatest advertisement for our sport. It makes me proud to be a part of it. We often don’t get the respect we deserve in tennis for the athletic demands it places on players, but this should push that respect way up”.

Roger Federer said of the match, “It’s so impressive to see. I mean, I was watching this. I don’t know if I was crying or laughing. It was too much”. Federer also added, “This is absolutely amazing. […] This is beyond anything”.

Novak Djokovic extolled both players, saying, “You have to give them credit, both of them. Whoever wins today, I think both of them are winners”.

McEnroe also hinted at the problems the players may face. with such high intensity of tennis, they may have shortened the lengths of their careers and risked their health.

Is The Rule Justified?

After playing the best tennis of his life Mahut still lost the match. It affected his mental health and he suffered from depression.  It is understandable that with the mental pressure he sustained to hold his serve 61 times, came to no avail as he lost the match.

Not only did both the players withdraw from their respective doubles, but Isner couldn’t compete in his Round 2 singles.To play a single match they had to keep a lot at stake, including playing no tennis in the rest of the grand slam.

To exhibit its supremacy, Wimbledon follows a strict code of conduct. but to extend a match 3 days has consequences that may affect the player a lot, as is evident.

Post the tournament, the All England Club announced that Wimbledon would be introducing a rule change to prevent such long matches.

I respect both the players tremendously. To come back to the same court for three days, to play the same set 2 days, to save ample of break-points, to leap, to stretch,to groan with pain, suffer cramps, dehydration and even a mental disorder.

They did everything possible to win, and so is expected of the players. Even though a sport needs a player to be ready for all that comes, shouldn’t there be limits?

If the match still doesn’t seem extraordinary, here are some stats.