A look at how Ricardo Kaka fared at Real Madrid. 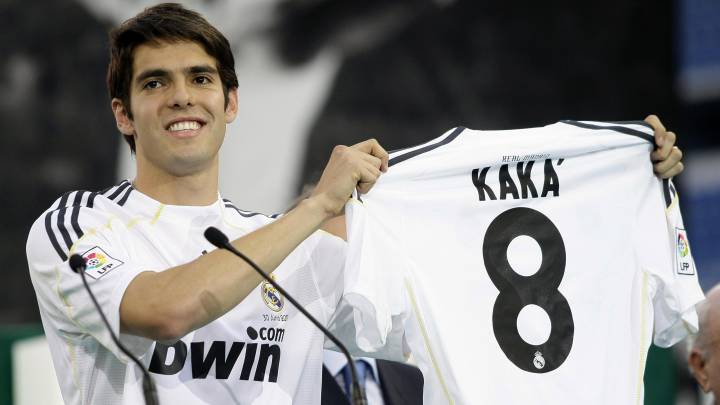 Current Real Madrid president, Florentino Perez, has been one of the most influential figures in Spanish football for over two decades.

Perez was the orchestrator behind Luis Figo’s infamous switch from Barcelona in 2000, which made him an overnight success at the Santiago Bernabeu. He was also the first man to come up with the idea of ‘Galacticos’ during his first spell as president.

And he fulfilled it, too, in only a couple of years’ time. Unfortunate results, both in Europe and Spain, saw him surrender his presidency in 2006, but that wasn’t the end of the Perez era. Far from it.

In 2009, he turned to the helm and kickstarted the second era of ‘Galacticos’ — ‘Galacticos 2.0.’ Karim Benzema, Cristiano Ronaldo, and Xabi Alonso aside, there was another big name that was unveiled in front of a packed Bernabeu that season.

On the last day of June 2009, Kaka stepped on the luscious Bernabeu pitch as a Real Madrid player, for the first time, hoping to add another successful chapter to his soaring career.

Kaka scored his first official goal for Real Madrid from the spot in a 2–0 win over Villarreal in the 2009-10 La Liga campaign. His movement, precise passing, and budding chemistry with Cristiano Ronaldo hinted at a great run, but niggling injuries were already starting to become a problem.

The Brazilian attacker ended his debut campaign with an impressive return of 9 goals and 12 assists in 33 games across all competitions. Real Madrid failed to bag a silverware that season, marking Kaka’s debut season a “failure.”

Failing to shake off the niggling knee injuries, Kaka finally underwent surgery in August 2010. The surgery was successful, but it forced him to miss the opening four months of the season.

He returned to the pitch in a 3-2 win over Getafe in January and scored his first goal of the new season a week later against Villarreal. The emergence of new-signing, Mesut Ozil, complicated things for the Brazil international, as then-Real Madrid manager, Jose Mourinho, looked more inclined to rely on the German’s incisive ball-playing and vision.

Kaka missed 8 La Liga games after his return from injury, ending the league campaign with 7 goals and 5 assists in 14 matches.

The attacking midfielder continued to struggle for minutes next season as well, starting only 17 games in the Spanish top-flight. Despite getting limited opportunities, Kaka tried his best to present Madridistas with invaluable memories.

In a Champions League group stage clash against Ajax, Kaka showcased his exemplary goalscoring and ball-playing skills, as he scored one, assisted another, and played an integral part in the build-up of one of the best counter-attacking goals in the tournament’s history.

Real Madrid won La Liga that season, and Kaka pitched in handsomely with 5 goals and 10 assists.

After enjoying an impressive campaign, Kaka hoped for more of the same next season. Sadly, Jose Mourinho couldn’t find the means to accommodate him.

Mesut Ozil took the centre-stage, and Kaka was pushed to the sidelines, as Real Madrid once again struggled to gain momentum in Europe and Spain. He managed to feature in just 27 games that season, racking up only 5 goals and 5 assists.

Having bagged 29 goals and 39 assists in 120 matches across all competitions, Kaka finally decided to part ways with Real Madrid in August 2013.

Coincidentally, Carlo Ancelotti, Kaka’s manager at AC Milan, replaced Jose Mourinho that season and helped Real Madrid to their 10th Champions League title — the only big trophy the Brazilian failed to win at the Spanish capital.

Kaka was full of flair and grace, mesmerising each of us with every turn, pass, and shot. Injuries robbed him of some crucial games, and the tiff with Mourinho took care of the rest.

His story was meant to be of ascension and inspiration but only turned out to be of missed opportunities and heartbreak. He was the last player before Luka Modric to beat Cristiano Ronaldo and Lionel Messi in the famed Ballon d’Or race and had the potential to achieve astounding things at Real Madrid.

Instead, Kaka will always be remembered as one of Florentino Perez’s biggest regrets. He will forever be one of Real Madrid’s worst undoings.