Recently in a podcast, Steve Smith revealed the secret to his unorthodox batting stance, which has made him almost invincible. 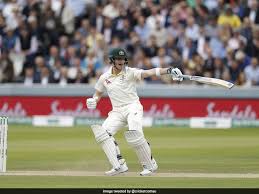 Steve Smith leaving the ball in one of the most unusual ways. (Image Credits: NDTV Sports)

Recently during a podcast by Rajasthan Royals, Steve Smith opened up about his unorthodox batting stance while chatting with his Royals teammate Ish Sodhi.

While discussing his unorthodox batting stance, the Australian run machine mentioned several reasons for he being is so animated in the crease.

Smith has also talked about his stance on the Amazon Prime’s show “The Test- A New Era for Australia’s team”. He has mentioned that the unorthodox stance comes naturally to him and that it is not predetermined.

Smith revealed that the way he reacts while batting depends on a lot of factors. It depends on who is bowling, how is the pitch behaving, which situation of game is the team in or how the bowler is trying to get his wicket.

Smith described that his general stance where his back foot is around or outside off stump is to ensure balls outside his eye line is not hitting the stump. By doing so he becomes more aware of the off-stump line and can tackle the swinging deliveries by leaving the balls on the fourth or fifth stump also known as the corridor of uncertainty.

Smith during the interview said, “For me, you shouldn’t get out if the ball is not hitting the stumps”. Therefore, by getting into his stance and leaving the balls in some of the most unusual ways, he tries to ensure that he limits the ways in which he can get out.

By doing so he exposes his LBW chances but according to him, if he gets out LBW and the ball is hitting the stump then credit goes to bowler for attacking the stumps. But his stance ensures that he does get dismissed chasing the ball outside off and he backs himself to play the ball if it’s aimed at his pads.

Smith is now the number 1 batsman in the world. He dethroned Indian captain Virat Kohli following his 2019 Ashes heroics. In the 2019 Ashes, Smith, who made a come back after one year ban following the sand-paper scandal, scored 774 runs 4 matches with an average of 110.57. He looked invincible for the bowlers in the series.

In his test career of 73 test matches, the Australian top middle order batsman has a stunning average of 62.8 and has amassed 7227 runs. His stance plays a vital role in his batting performance as it allows him to have a better visual judgment to tackle the opposition’s bowling attack.