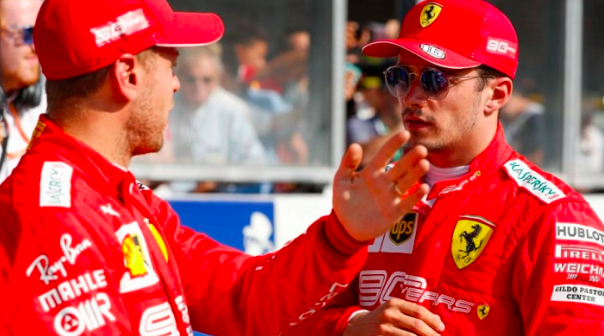 There are no team orders in Ferrari, as such!

If one thought that the growing domination of technology in Formula 1 racing was the only sense of change that the sport has come to embody then perhaps it beckons a great discussion. While surely as the sport aims at garnering a greater chunk of the worldwide audience whilst standing at the crossroads of deciding between demanding marketing budgets and finding new ways to popularise Grand Prix Racing, could it be that there’s something more the drivers are subjected to, instead of just high-tech rigmarole?

What has changed in F1?

Implicit in the way Formula 1 has come to embrace the growing sense of competition from the other teams is one rather widely-debated aspect; something that’s attracted curious eyebrows and courted much discussion.

And from that sense, therefore, it may not be wrong to say that team orders in F1 are a dominant reality in the current context of Grand Prix racing.

Would you be withstanding the risk of being crucified if you stated that somewhere those days happen to be a feature of the past, of the glorious ‘have-been’ where teams allowed drivers to race more freely?

Team orders in F1: not so shocking, after all!

We are, very much, whether we come to fully accept it or not, prevailing in the times of the team orders. The first clear instance of the execution of team orders in F1 was the usage of the popular Ferrari radio message delivered to former F1 driver Felipe Massa during the 2010 Hungarian Grand Prix.

As Massa was failing to go fast exhibiting the brutal pace of the Ferrari F10, he was told loud and boldly: “Alonso is faster than you!”

Since then, the execution of team orders in F1 has been a recurring reality, more than ever before.

And the one classic case that springs to the mind are when both Valtteri Bottas during the 2018 F1 season and Kimi Raikkonen for the better part of the 2017 and 2018 seasons were asked to step in to ‘assist’ their respective teammates.

When the Finns were subjected to Team orders in F1

Whether Raikkonen was successful in ‘aiding’ Vettel can be easily gauged from the fact that there was one clear winner at the conclusion of the 2017 and 2018 seasons and he wasn’t sporting the “Scarlett Red!”

The last two seasons have more or less, demonstrated a different imposition of team orders in F1. Take the Monaco Grand Prix of 2017 for example when Kimi, who was leading the race, asked to dive into the pits come Lap 33 and ever since then, Raikkonen was left trailing race-leader Sebastian.

One can’t possibly forget how Valtteri Bottas, who was clearly the frontrunner to win the 2018 Russian Grand Prix, asked to make way for Hamilton to grab the race lead.

Both Finns had to, in a way, bear the brunt of a dominant discourse of our times in modern Formula 1 racing.

But all of this beckons a question

When one driver is asked to let the other pass-through, does it mean the one who was asked to step aside subjected to a mediocre sense of treatment from the team or could it be that he becomes, more or less, a permanent fixture in terms of being the second-best man in the outfit?

While this can be fodder for an extensive and rather incompletable discussion, what’s clear is that ever since young Monegasque driver Charles Leclerc learned of his 2019 fate- joining Ferrari- he sent out a loud and clear message.

That he wasn’t in the Scuderia family to be Vettel’s deputy was maintained by the young 21-year-old driver and where it stands, then the man who won Ferrari their home race in nearly a decade of painful waiting.

And where it stands clearly, Vettel and Leclerc seem to be racing each other freely save the recent Belgian Grand Prix where Vettel was asked to make way for Leclerc, the eventual race-winner.

Also, toward the start of the season, during F1’s 1000th race held at China, as the two Mercedes cars were chipping away fighting into the lead, the two Ferraris were seen losing time battling one another.

Leclerc, who was recently quizzed on the prevalence of team orders in F1 and at Ferrari, in particular, put it out clearly and stated that there was no “Number 1 Driver” at the Prancing Horse.

Charles shared, “from the outside I don’t know if it looks different or whatever. From the inside of [the team] it’s very balanced,” Leclerc said. There have been situations in the past where I’ve helped Sebastian, some others where Seb helped me, and I think that’s the way forward for the team.

“The team is doing everything for its benefit and I think that’s the most important. We are here to perform at our best which is what we try to do. But, in the end, I’m very happy the way the team is at the moment, “he concluded.