Silly Tournament For South Africa Only Got Real. But Have There Been Any Positives, At All? 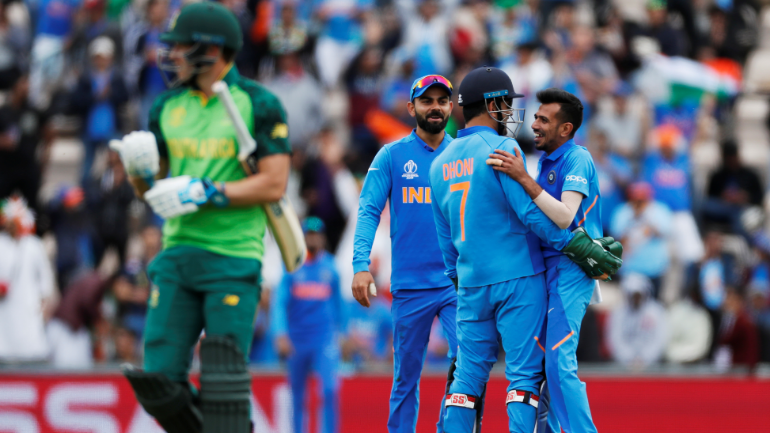 SA have had a pathetic world cup! There you go, deal with it!

Why depend on the net-run-rate to play a part when an able unit comprising of eleven can? One’s not sure whether South Africa do actually have a plan in place, now inching closer to a possible quick exit, and therefore, more distant from opening their 2019 World Cup account.

3 games done and where do they stand?

Even Sri Lanka and Afghanistan, the former not the best teams on the ODI circuit nowadays has scored a point.

But then, not every team finds itself in embarrassing situations as frequently as the Proteas, right?

Against a team that hadn’t played a single contest with 6 games already played in the ongoing world-cup, South Africa appeared kind-hearted in giving India an easy chance to dominate them.

Where was the fight, you wondered perhaps from that depressing sofa in Jo’burg or anywhere Cricket is a live wire of a passion in Kwa-Zulu Natal?

Few teams, after all, appear as large-hearted as the one being led by Faf du Plessis, the South Africans bundled out for a paltry 227, a total that saw the Du Plessis’s men falter yet again, after their embarrassing start against England.

In a game where the South African bowlers should’ve been made to focus on defending a sizeable score, considering this was India that they were up against, it was strange to see Rabada, Phehulkwayo, and Morris make runs.

Wasn’t that the job of Amla and de Kock, the duo responsible for nearly 12000 ODI runs? Not that sparing de Kock the criticism he’s copped up would help, this, it mustn’t be forgotten is a batsman who waged a lone battle against England in the world cup opener. Where was another beautifully-crafted 68, one thought?

Faf the lonely hero in the runs department, in this world cup?

But to elaborate on the Protean disappointments, what was rather frightening from a South African perspective was the fact that in a virtual do or die against India, there weren’t many that came from the bat of their captain either.

But fundamentally, would you discount Faf- bowled brilliantly by an often under-appreciated Chahal- who hung out there for a solid fifty-something run stand with cricket newbie van der Dussen after Bumrah sent his openers packing?

Surely, just the other day, Du Plessis, who’s scored nearly 700 of his 5200 ODI runs against India at a staggering 59, could’ve done better. Perhaps, he could have used his feet against Chahal, India’s bowler of the day alongside Bumrah, way better and may have been better off with showing far more intent than he did in his 54-ball-38.

But then, that is how things pan out sometimes.

And maybe, it was for this colloquial ‘rainy day’ that teams depend on lower-order specialists; blokes who can act like mercenaries, get in there when the chips are down and bail the team out.

JP’s been a disappointment for South Africa

Sadly though for South Africa, who’ve lost now to England and Bangladesh and, unfortunately, also to India, there was nothing that Jean-Paul Duminy could offer.

His 11-ball-stay against Kohli’s bowlers saw Kuldeep clinch a peach of a wicket, the left-hander failing to sweep, not a shot that he plays with a Lara-esque precision anyways.

While the same can’t be said for David Miller, who, just the other day against Bangladesh, made a fluent 43-ball-38, one wonders, what’s gone wrong with JP, playing his final series anyways?

To that end, in making the hitherto high-scoring World Cup, Afghanistan and Pakistan’s routs at the hands of Australia and West Indies respectively being exceptions- it was impressive to see Morris hold his ground alongside Andile Phelukwayo.

A Lesson In Phehlukwayo

From 89-5 to 139-6 as South Africa went from being hopeless to being worthy of putting some fight to India, top honors belonged to Morris, who, it mustn’t be forgotten, wasn’t an original pick in the current squad in England. That blazing cover drive off Bumrah toward the death overs and an understated effort with the ball, his first four overs leaking only 10, saw Morris as a somewhat unlikely hero.

All that told, what one may not want to forget or underpin would be the contribution of the bowling all-rounder, Phehlukwayo, who often goes unappreciated.

While his patient 61-ball-34 showed senior pros like Amla- enduring an abysmal tournament- and de Kock how to counter pace and spin, it’s the calmness with which the Protean paced an inning that should serve a lesson to most teams who’d challenge India in the coming days.

Perhaps a lesson in there to a Russell and Brathwaite as also to Maxwell and Stoinis, who, in the absence of their respective big guns’ failure (at firing runs) may have to dig in.

At the end of the day, even as South Africa, who- over two decades back in time- faced the rubbish prospect of 22 required of 1- disappoint again, what may push them in what’s left is that they have to play for pride.

But can it actually ever translate to the Proteas fire in 2019 World Cup, we don’t really know?

What do you think Faf?