Smriti Mandhana has the makings to be a stalwart of the women's game and is already an inspiration! 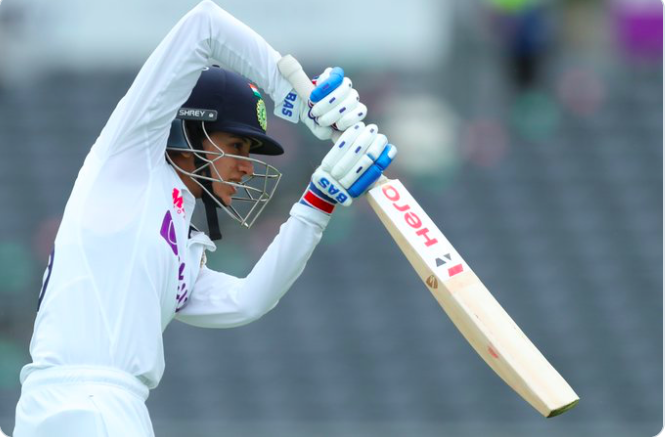 Just ninety-nine runs away from scoring 2,000 runs in T20 internationals. Only a little over 200 runs from reaching 2,500 one day international runs. Already the vice-captain of a side considered among the strongest in the women’s game. And above anything, a face that’s considered a thing of beauty, though more importantly, one that instantly brings to mind the realisation that there’s no limit to what women can achieve in sport for as long as they continue to strive and persist with honesty.

Sangli’s daughter, India’s pride, and above all- a dominant force with the bat known world-over, Smriti Mandhana is the mugshot of success in the women’s game, and has done far more than what most would imagine for a 25-year-old.

Though, what’s remarkable about Smriti Mandhana is how ably she’s made a place for herself in a sport as gruelling like Cricket having once a bespectacled student far away from imagining a career in Cricket. Someone who wished to pursue a career either in hospitality or science, not really toward the piece of earth called the twenty-two yards, the left-hander has come a long way.

In cricketing parlance, it’s like dancing way down the track, out of one’s comfort zone backed by nothing but sheer belief.

Just the kind of sight that pops up when you see Smriti Mandhana hoists a towering one on Jess Jonassen or Sophie Ecclestone, showing grace and flair akin to a ballet dancer’s movement.

At an age where the constant pressure of representing your country at the highest level can in itself, be an onerous task, let alone the challenge of performing across formats, Smriti Mandhana has responded to the challenge beautifully by scoring aggressively and consistently, time and again.

From the onset of the 2017-18 season until the present day, it’s not Harmanpreet Kaur, nor Poonam Raut, but Smriti who’s produced gallons of ODI runs- 911 from just 16 innings, at an average of 65.

This, it ought to be noted, also includes a highest-score of 135, the highest-individual score by an Indian in South Africa as well as against the very opponent.

Just the kind of stat that would leave any batter, whether a Meg Lanning or Ellyse Perry, in sheer awe. Though implicit in Smriti Mandhana’s rise dominance with the bat is her ability to anchor an inning.

While nine in ten would remain, and not hard to understand why, in awe of her big-hitting, it is Smriti, the partnership builder, inning-repairer and one who holds onto an end that counts just as much as the force behind attractive stroke making.

The reference to context being her tremendous opening stand with Shafali Verma in England recently that saw the duo amass 167 runs against England, which happens to be the highest first-wicket partnership in Tests for India.

Having once been the kid with mischievous smile who looked up to Mithali and Harman for inspiration, to being a source of inspiration herself to the likes of Shafali Verma and Richa Ghosh, Smriti has risen in stature, though not in arrogance.

Always available for advice to young women; girls still trying to learn on how to hold the bat, someone who doesn’t shy away from interviews and maintains the respect for her seniors, the likes of which includes the powerful trinity of Mithali, Harmanpreet, and Jhulan, Smriti Mandhana shows it’s possible to be successful minus the starry aura one commands or throwing one’s weight around.

In an age of shenanigans, to be simple and conduct oneself with dignity is not only worthy of appreciation but indicative of the fact that it is still very much possible to base oneself on the principal of humility.

Whether fielders are inside the circle or patrolling the outfield, to Smriti it makes little difference for the high-backlift orchestrated by heavy batswing can clear the ropes wherever, from the Wankhede to the MCG. We saw repeat instances of this in the games that marked a precursor to the much-awaited Women’s IPL, whether in 2019 and 2020.

What supports this further is the relative ease with which Smriti has gone about striking-not accumulating- her T20 runs, 1901 from just 1567 deliveries.

To those who direct needless ire to the women’s game, calling girls weak and nimble to engage in big-hitting, a lot of doubts can be dispelled by glancing past Smriti’s strike rate- 121 in T20Is.

Though what separates Smriti the dangerous batswoman from the charismatic woman who’s furthering the cause of women’s cricket, is her calmness under pressure.

Not the one to lose her cool, nor the one spotted with chewing off nails amid duress, a fine example of which one saw in India’s dismal campaign at home against the Proteas women.

In the only T20 international India won, at the back of recieving proper South African hammering, came in the third game, Lucknow, where as captain, despite chasing a huge 158, Mandhana powered her team to a nine-wicket win, powering an 80 off just 64 deliveries.

In that game, she wasn’t just the fierce striker of the white-ball, but the captain of a side so desperately searching for a win.

As women’s cricket continues to grow in presence, touching geographies where cricket was unforeseeable at one point in time, what’s foreseeable is that the legend of Smriti Mandhana will continue to defy biases and arrogant taunts- that the right place for women is the kitchen, not the cricket hall.