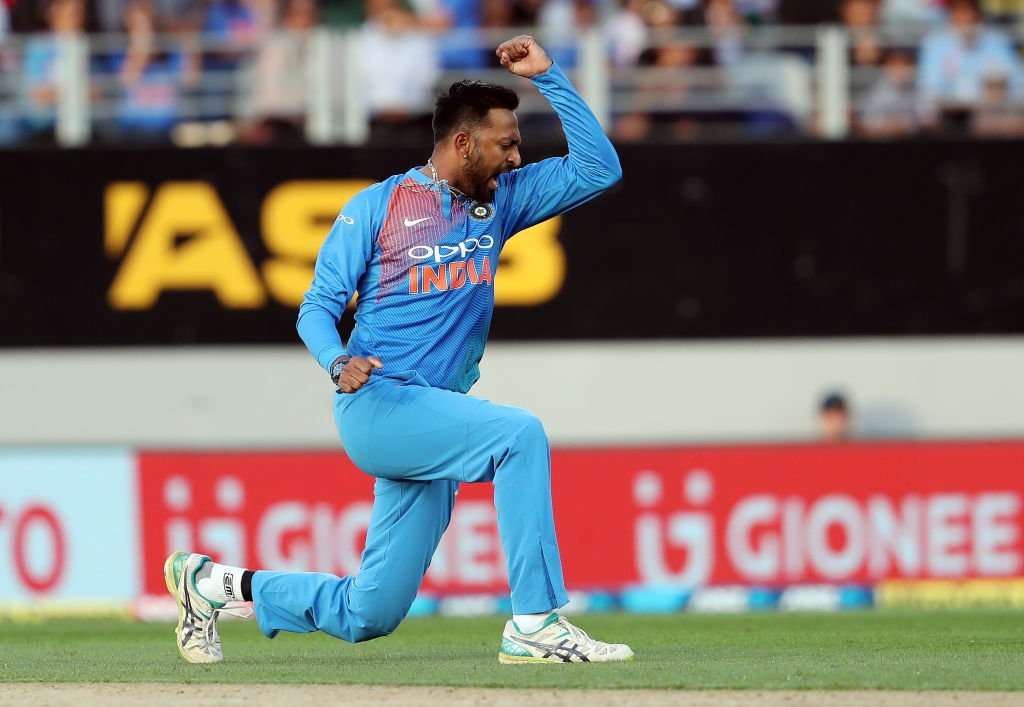 Krunal in action for India in a T20I for India. (Image: Twitter @ICC)

As the race for the ICC World Cup 2019 heats up, the Indian cricket team is weighing in on certain options as far a few available slots in the squad is concerned. The core of the Indian team is pretty much decided and two slots have a few takers. So things could go down the wire in terms of squad selection. The deadline for the 15-member squad to be selected is April 23, 2019.

One such player who has made some noises recently is Krunal Pandya. The T20 specialist made his debut for India in the 20-over format last year. Since then he has featured in nine matches. Krunal has had mixed fortunes as far his performances are concerned, but he remains a handy customer. The spin all-rounder has what it takes to get those lusty blows. He can also pick wickets and keep his side in the match.

Krunal was recently seen in the T20Is against New Zealand. The left-arm all-rounder had a decent campaign for India in the three-match series. There have been some talks here and there regarding Krunal’s foray into the ODI set-up next as he can be looked upon as an option for the World Cup. He recently played two 50-over matches for India A against England Lions besides one Ranji match for Baroda last year.

With limited time left and a crucial phase ahead, it could be an interesting time, as things heat up. Questions arise, is Krunal the dark horse? Can he get a ticket to the World Cup? Well, we analyse the same and what is most likely to happen for the cricketer.

Krunal hasn’t been consistent with his bowling

In the recently concluded third T20I between India and New Zealand in Hamilton, Krunal’s bowling was mauled for 53 runs. His bowling seemed to be predictable and clueless. So much so, the player leaked 119 runs in three T20Is against the Kiwis. The Kiwi batsmen relished the freebies they got in terms of length and width and spanked him all through the ground.

Krunal in the first T20I went for 37 and picked up one wicket. The issue for Krunal is his economy rate of 8.72. One feels that there are times where he does lack the imagination. The speed of deliveries, trajectories, lengths are similar on a consistent basis. So when a batsman has his measure, one can expect an all-out attack.

Krunal’s 3/28 gifted him the Man of the match in the second T20I. There are occasions as such where he comes to the fore. He will have the occasional good days with the ball, but he isn’t someone who can be counted upon to give you four overs every time in T20Is.

Against Australia at the end of 2018, Krunal was walloped for 55 runs in Brisbane. He gave away just 26 two days later in Melbourne and picked up 4/36 in Sydney. So there is the quality, but the consistency is missing.

Former cricketer turned television commentator Sanjay Manjrekar questioned the player’s role in bowling. He mentioned that India cannot afford to give him more than two overs if played.

Lack of experience in ODIs will work against him

Krunal cannot be counted upon as the fifth bowler if needed. He can at large be a sixth bowler and one can split those four overs with another part-timer. Now the issue for Krunal is also that he hasn’t played ODI cricket. His natural talent and instincts are mainly suited to T20Is.

So one can fairly assume that the selectors and the management won’t take him to the World Cup on basis of a few T20Is. Yes, the all-rounder adds a fair amount of guile and precision with the bat, but India have better options than Krunal Pandya. The Men in Blue will go for Hardik Pandya as the principle all-rounder. And if they select a spin option, then Ravindra Jadeja leads the proceedings.

Pace all-rounder Vijay Shankar is also in the mix. So Krunal is below in the pecking order. Meanwhile, he has also featured in just three first-class matches and 47 List A games. When compared to 71 T20s, these appearances are way low. So one can consider the player as a T20 specialist, but the experience in ODIs is a big miss.

Krunal’s exploits with Mumbai Indians in the Indian Premier League and his credentials as a productive batsman down the order suits his style in T20Is. He doesn’t look like someone, who can give you 10 overs in an ODI match, something that a Jadeja can give. Krunal has batted in only four innings for India (strike rate 156.81).

The Baroda player’s capabilities in the 20-over format can help him stay around the side. He relishes the 20-over format and is a regular for MI in the IPL. Also, since the World Cup is being held in England and Wales, the shout for Krunal in getting a slot, makes it difficult.

Krunal has the ingredients to chip in in all facets of T20 cricket. There is no doubt that he is a valuable component in T20s. In 2018, Mumbai Indians didn’t think twice to use their ‘Right to Match’ card and paid a heavy tag of Rs 8.8 crore. They also retained him for the 2019 edition as well. In 39 encounters for MI, Krunal has scored 708 runs at a strike rate of 153. 91.

It was his superb 38-ball 47 in the final of the 2017 edition against Rising Pune Supergiant that helped Mumbai lift their third title.