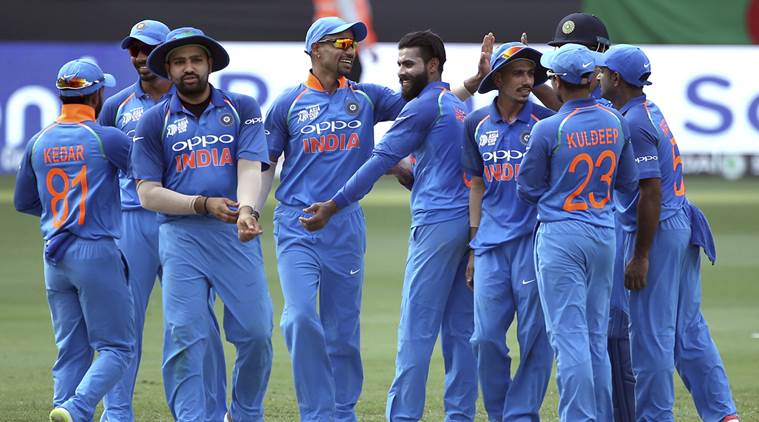 India cruised to victory in 36.2 overs while chasing a paltry 173 runs against Bangladesh in their Super Four encounter of the Asia Cup 2018 in Dubai. All-rounder Ravindra Jadeja made a superb return to limited-overs cricket, picking 4/29. Skipper Rohit Sharma scored a second successive fifty to remain unbeaten on 83 off 104 balls.

The win augurs well for India, who are slowly and steadily going about doing their business in style.  Stand-in skipper Rohit had all class in his delightful innings that saw him hit five fours and three sixes. He shared two crucial stands with Shikhar Dhawan (61) and then a 64-run stand with MS Dhoni.

Ahead of another blockbuster clash against Pakistan and an epic battle against Afghanistan, the Men in Blue ensured that they got off the blocks straightaway in the Super Four. India was sound in the all-round show and did what they set out to do – dominate the game from the start.

Here we decode the learnings of Indian’s win against the Tigers.

For the 2nd consecutive game, the duo of Rohit and Dhawan (40 off 47) provided a solid start with a 61-run stand. The Indian skipper played the second fiddle and once Dhawan departed, he changed gears. He brought his 36th ODI fifty with a towering hit off Shakib Al Hasan over deep mid-wicket.

The supreme opening batsman made sure he stayed till the end and take responsibility for the side. Like regular skipper Virat Kohli, the Mumbai batsman showed his class and temperament in playing the role of a leader by example. Rohit has built a trust and it’s gaining impetus day by day.

The captain getting valuable runs was crucial as India know they need him consistently if they are to win the trophy on September 28. His decision making in the field and bowling changes need to be lauded. That helped India keep the pressure throughout on their opponents.

Shoutout to Dhoni for his inputs

We saw Dhoni playing like his former self and it was a typical ODI performance on the field. When Shakib smashed Ravindra Jadeja early on for boundaries through the leg side, Dhoni’s magical decision paid dividends. He was seen going up to Rohit and discussing something.

The next delivery saw Shakib go for the attempted sweep over square-leg and there was a fielder this time (Dhawan) stationed there who accepted the catch. Prior to that, there was a gap in that region with a man protecting the boundary instead.

Kudos to MSD, who still is the brain of this side and never hesitates to give his valuable inputs.

Also, he got much needed time in the middle, having not batted against Pakistan on Wednesday. Earlier, the former captain had failed to open his account against Hong Kong in the team’s tournament opener. His 37-ball 33 will do him a world of good.

Perhaps, India could send him in this position in the coming games.

Jadeja comes back with a bang

Jadeja made a return to the ODI fold after more than a year. During this period he missed a total of 27 ODIs. And once he got the wicket of Shakib, he settled down and never looked out of place. A day when the wrist spinners looked ineffective, Jadeja showed that he could be called upon anytime and deserves a place in the squad.

Jaddu, who replaced an injured Hardik Pandya, stayed true to his role and did the job. He broke the backbone of Bangladesh batting with his accurate left-arm spin and ended with impressive figures. Jadeja’s accuracy and India’s field placement was in sync and that got Bangladesh to try out fancy stuff.

Jadeja attacked the stumps consistently and bowled with variety mixing the deliveries up. He was largely helped by the wickets India’s pacers took upfront to put Bangladesh into the back foot. The contributions from the pace pair, Bhuvneshwar Kumar (3/32) and Jasprit Bumrah (3/37) cannot be ignored.

Shakib, Mushfiqur callous at their best

Bangladesh batsmen were horrible in their run chase against Afghanistan on Thursday. Against India they needed a fresh Mushfiqur Rahman and skipper Shakib to settle in and take responsibility. Just when Shakib found the space and shifted gears, his decision to overdo the same cost him his wicket.

With runs already coming in that Jadeja over, Shakib needed to think long, but impatience saw him pay the price sheepishly. Then it was the turn for Mushfiqur. The senior player had to bat till the end as he did against Sri Lanka, but pressure made him play an unorthodox shot, and he found the fielder.

On a day when India’s senior players stood tall and delivered, their Bangladesh counterparts did otherwise. It’s time Bangladesh batsmen show some character and fight. It looked like they learnt nothing from their disastrous show a day earlier.