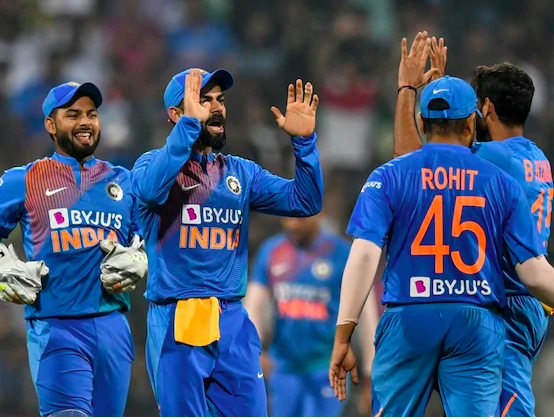 A magnificent display of all-round cricketing excellence, spurred by the brute force of the Indian batsmen, followed by an exhibition of effective, containing bowling effort allowed India to register a thumping win on the West Indies comfortably in the Second ODI of the 3-match series played at Vizag.

In so doing, Virat Kohli’s team, led brilliantly by a hostile batting performance by the two openers- both Rohit and Rahul posting special, match-winning centuries pushed the team to post a mammoth 387. Asked to chase well over seven and a half an over, India’s ask, their highest against the West Indies in recent ODIs, ultimately proved too much for the West Indies to handle.

This enabled India to hit back at the visitors after the hosts lost out the maiden game just days ago. The series now tied at 1-1 with Cuttack’s third and decisive One dayer to be played effectively as a final, it could be said one couldn’t have asked for a more evenly placed series.

But before the big finale arrives on Sunday, let’s look at the key talking points of the Second ODI between India and the West Indies 2019 series

When Rohit Sharma was found to be somewhat struggling against the likes of Alzarri Joseph and Jason Holder, the latter being the most economical Windies bowlers in the Second ODI, it may not have seemed that the right-hander would end up scoring a 150 plus.

But as they say, never say never, right?

In displaying, yet again, that special ability to score freely, scoring boundaries at will, and using the pace of the ball to collect maximum returns on a single delivery, the Hitman from India cut loose on the Windies, and ended up striking 5 big sixes as he raced to a brilliant and should one also say tiring 159.

But the biggest game-changer where Rohit was concerned was the fact that he held on successfully to an end even when Rahul and Kohli departed, charging down the hapless Windies bowlers to register his second ODI ton against the Caribbean team.

He didn’t allow Keemo Paul to settle down and was particularly harsh against Sheldon Cottrell, who endured inarguably, a forgettable day.

Moreover, when the runs didn’t come against an in-form Jason Holder, then Rohit Sharma showed all that experience of simply converting the strike, cutting loose against Pierre.

Special hundred for Rahul, his first in India

Rahul, it appears, has struck a fine chord with the team and fans, given the menacingly good form he’s been having with the bat, of late.

While he may have only struck his third-ever ODI ton, and his first-ever in India, the fact that Lokesh Rahul took only 104 deliveries to score his 102, his best-ever score against the West Indies underlined the importance of his effort.

Moreover, Rahul’s staggeringly quick accumulation of runs resulted in an effort that yielded a deserving century after one might say he narrowly missed on scoring one at the Wankhede in the deciding T20 a few days back.

An inning laced with class and had composure written all over it, saw the right-hander taking the early attack to the Windies bowlers when Rohit Sharma was reasonably quiet at the other end. In the end, the classic display of all round elegance by one of the finest strikers of the white ball in the game enabled India to punch its weight above the West Indies.

Moreover, Rahul’s consistency against the Pollard-led side, as indicated by his fluent fifties at Hyderabad (that led him past 1000 T20 runs) and Wankhede, indicated the intent of the Karnataka batsman to make the most of the opportunities he’s been presented with.

Rare failure for both captains

Not often does one see someone of the class and charisma of Virat Kohli leaving the crease but without disturbing the scorers, right? But when Kieron Pollard delivered a peach of a slower one, only to induce Kohli to come slightly forward on an uppish delivery, Roston Chase at short mid-wicket completed a simple catch. Thankfully, there was Rohit Sharma at the other end for India.

But upon his turn in the middle, Pollard also perished for a first-ball duck, unable to adjust to the quick and menacing pace of Shami’s brute spell in the very over where the right-armer had first scuttled Pooran.

Kohli’s golden duck, nonetheless, formed among the key talking points from the Second ODI between India and West Indies 2019 series.

Team in trouble! Who do you turn to? If you were a fan of the Indian cricket team throughout the 2000s, then the answer would undoubtedly be Rahul Dravid. But if you are a West Indian following their cricket in the current generation, then the answer and the respect it generates points to a batsman of the very highest class and ability: Shai Hope.

In continuing his sublime touch, Shai Hope ended up with what one might reckon was a disappointing 78 off 85, a knock that featured 3 sixes and 7 boundaries and importantly, a strike rate of above 90 but should have resulted in a hundred.

But the way Hope was going about his scoring, timing the ball particularly well against the pace trio of Shardul, Shami and Chahar should have perhaps yielded a hundred, what would’ve been the 9th of his ODI career.

Alas, it was never to be.

While on the one hand, the 78 run knock should motivate arguably the finest of all West Indian batsmen in the ODI set-up, an inning that came just at the back of an unbeaten 102, Hope, one suspects, would also be wondering what if he had put more wood into the shot that ultimately led to his downfall off Kuldeep?

Nonetheless, with the big final yet to be played, the elegance and class of Shai Hope, one reckons, would still find another opportunity to shine through. For his top score for the West Indies, Hope’s fluent fifty was among the key talking points from the Second ODI between India and West Indies 2019 series.

Among the big talking points from the Second ODI between India and the West Indies 2019 series was Mohammad Shami’s brilliant spell from the white-ball. An exhibition of very high-class seam bowling, Mohammad Shami, who happens to attract a lot of praise for the wrist position that allows him to bowl to a very good effect, just didn’t let the West Indian batsmen score easily of him.

While in the end, he took a vital, ultimately game-turning 3-for against the West Indies to enable India to claw back in the series, the fact that he was perhaps the only seamer who adjusted his line and length causing the chasing team a lot of trouble made him the stand out performer.

In removing the very dangerous Nicholas Pooran, who belted a fine 75 off just 47 balls, the right-armer bowled a perfect delivery pitched right in Pooran’s zone. Although it was a slightly shorter one, Shami trusted his instincts despite bowling against Pooran who had been particularly punishing of the shorter deliveries. But this one didn’t come from the meat of the bat and ended up behind deep square leg in the outfield, inches within the boundary.

Once the dangerous left-hander was dislodged, one who nearly threatened to take the game away from India, Shami completely swung the game in his team’s favor in removing Pollard for a first-ball duck, on his very next ball. Bowling with express pace, the delivery was marginally pitched on the off-stump, tempting the right-hander to flirt with the thinnest of edges, leaving Pant to complete a regulation catch.