Sebastian Vettel is the Ninja to Lewis Hamilton’s Samurai.
He’s the fire to Lewis’ ice. He’s a ferocious mutant spark to Lewis Hamilton’s fury.
You don’t undermine a driver like Sebastian Vettel; you raise your game against his. You scale your peak, being driven to the very edge when you’re pushed by the smiling German, a stormtrooper of sorts who attacks in that bloodshot Prancing Scuderia.
They say rivalries often make or break a sport. Well, in the case of Sebastian Vettel versus Lewis Hamilton, we find a rivalry that has spurred Formula 1 to the very edge and has once again, catapulted the pinnacle of motor-racing to the attention of its globe-trotting fans.

The Vettel vs Hamilton show


You have to feel for the fan who stays awake at nights, remains glued to the screen, whether of that smartphone’s or of that grumpy desktop workstation’s, in a bid to catch live action.
And when not, then at least, remains drawn to consume every minuscule detail of who called the shots over whom out there on a tarmac that so often bursts into infinitely tiny carbon fibres when miscalculations, ego clashes, failed manoeuvres get the better of the men in constant motion, absorbed amid the tussle.
For a second, remember the predictable 2014-15 seasons.
So fantastic and dominant were the Mercedes that it just wasn’t possible for Ferrari to give the duo of Nico Rosberg and Lewis Hamilton a run for their money. Even if you missed an occasional race, you weren’t surprised to find who claimed it.
When it wasn’t Hamilton, then Rosberg.
On most other occasions, vice-versa.
That said, to be fair to the current grid in Formula 1, had it not been for the Hamilton versus Vettel saga, an ever-constant starting 2015( effectively), Formula 1 may have become a sleep-inducing factor for some fans when it should’ve been the very reason for  them eschewing sleep from their regimen with live racing on.


To that regard, had Sebastian Vettel not upped his game, in a visibly superior Ferrari, starting with a reformed chassis since 2017, supported by a better, well-equipped aero-package, Hamilton may have quite simply stormed his way through at every single race, barring a few instances where the likes of a Max, Ricciardo and his own teammate eloped with a rare win.
As it is, the odds of having to contend with pretty straightforward 0utcomes have significantly increased given the inception of newly introduced tracks such as Sochi (Russian Grand Prix) with circuits like Monaco making it dauntingly hard for drivers to pass one another.
So what has Sebastian Vettel been up to in 2018?
With 12 races completed and F1 counting days before returning for what’s pegged to be a fitting finale to 2018 season, Sebastian Vettel sits second, behind Hamilton on the driver’s standings.
At 189 points, he’s well ahead of teammate, Kimi Raikkonen, the Finn having found a second wind and what many might suppose a significant step-up in his chances to extend his F1 run for one more year.
But that said, Vettel may not feel most comfortable trailing arch-rival Lewis Hamilton by 24 points. Rewind the clocks back to this same point in time in 2017 and Vettel headed into the mid-season break, comfortably ahead of his nemesis, having roared at the Hungaroring, with Raikkonen completing a Ferrari 1-2.
How Hamilton would fight back, later on, would set the tone for not just the remainder of the season but in establishing his firm credentials as an all-time legend.
That said, if you were to probably decode the entirety of FIA’s, Charlie Whiting’s and even Maurizio Arrivabene’s mind now, then probably all might agree in unison that this championship is now Hamilton’s to lose.
Even the most passionate Ferrari fan who craves for the Scuderia to lift a World title possibly with the same desperation as a wife who awaits her husband returning from an onerous stint at a war-front speculates whether Vettel’s retirement (purely his own fault) at the German Grand Prix was the turning point in the championship?
Possibly the mere mention of that epic win under wet-weather may prompt the charming Briton to pop into a smile. Kimi, for sure, may not indulge in one. The German driver, surely, would be keen to dodge the question.

It was a predicament for Vettel, wasn’t it?


It probably doesn’t matter what experts like a Karun Chandhok, Martin Brundle, David Coulthard or Suzie Perry think at this point in time.
The odds are here in front of us and they beckon for some studious introspection.
Vettel did a repeat of his 2017 heroics at Melbourne but clinching the season-opener at the Australian Grand Prix. He’d prove his sensational win right at the start of a fresh season was no flash in the pan by dominating at Sakhir, at the 2018 Bahrain Grand Prix.
A track tailored to suit the Ferrari’s strong straight-line and high-corner speed, Vettel went from strength to strength bagging 2 Grands Prix wins in the same fashion he’d begun his 2017 challenge.
A forgettable race at China, partly thanks to the altercation with Verstappen would ruin the Ferrari driver’s chances, who’d secure no better than a P8. At Azerbaijan, Vettel, who’d looked strong all weekend and seemed visibly in control to claim Baku’s imposing challenge would succumb to pressure upon the resumption of the race, during the closing stages, after the safety car drove into its out-lap.
He’d be passed by both Mercedes cars as also the Ferrari of Kimi. 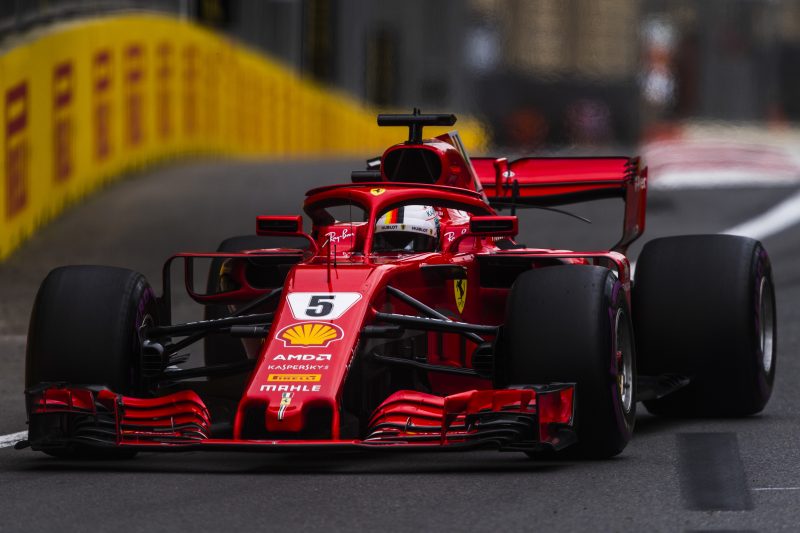 What had until then been a pretty dominant run for Sebastian would yield a forgettable run, Vettel garnering fourth.
Interestingly, Vettel had entered Baku with a 9-point lead over Hamilton. By the time he’d leave the Central Asian fortress, he’d see Hamilton in front, leading by 4 points.
The first dramatic change would further exacerbate Vettel’s run.
At Monaco, while he kept coming hard to Ricciardo, stuck with a major gearbox problem, the Red Bull driver denying Sebastian what might’ve really been a win, ever since Lap 35 commenced.


He’d pick up a fabulous, dominant victory at a track that could be comfortably called Hamilton’s second home-run, Montreal; Canadian Grand Prix.
The precious Ferrari win at icy-cool Canada, marked by Vettel’s imperious pace and spectacular tyre management would reinforce the German driver’s grip the standings.
By the time Vettel exited Montreal, Hamilton was in his mirror, instead of being ahead, reflecting in his visor. Seb claimed a tiny but relevant 1-point lead over Lewis.
The start of the European season, beginning with Spain would bring a heartbreak for Seb, barring Silverstone, the only Grand Prix in the past 5 races that he’d win.
After an ordinary P4 at Spain, Vettel would improve on his dry run at Les Castellet, from where he’d collect a P5 moving on to a hard-fought P3 at Austria.
In what became a moment of great reprieve for Red Bull, having failed to pick up a win on their home track, following Ricciardo’s mechanical DNF in the race, Max would assuage the past hauntings to win an epic at Spielberg, a track where Vettel’s grand pass over Hamilton would make for strong headline material.
At Silverstone, next up, Sebastian Vettel would pick up quite possibly his finest win this year, aided by luck, prompted by the challenge to win at Lewis’ alley and defined by great, indomitable driving.
The fantastic pass over Bottas in the fighting stages would underline Vettel’s hunger to win. At all this time, Lewis, who’d spun around at Turn One, inside the opening lap would manage a gusty P2, ahead of Kimi, not the most lovable man that weekend.
Next up, just when it had seemed it was all going fine for Sebastian, primed to ace his home Grand Prix, at the Hockenheimring, Vettel would spin out of track and slide away into the rough patch under challenging wet weather as Hamilton, recovering from behind the grid would finally gain control of a race where he’d crown himself as the deserving winner.

Cometh the hour, cometh the man who kept his cool 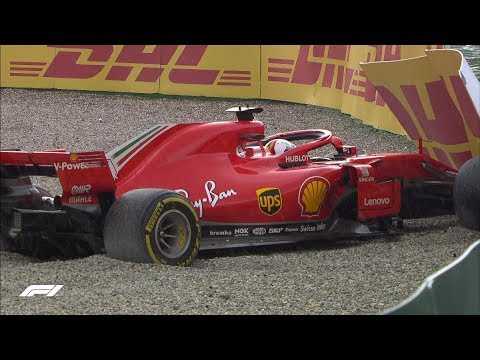 Winning the German Grand Prix ahead of Bottas and the ‘Iceman’, Hamilton demonstrated panache and faultless control to return the favour to Seb, who’d spoiled Lewis’ party at his home track, the Briton winning at Vettel’s home turf this time.
Then, in the final race before the mid-season break, Vettel would endure agony and pain in his failure to pass a visibly dissipating Mercedes of Bottas all throughout, before seeing a fantastic Hamilton run, who’d win once at Hungary, a track where he’d last won at 2016.
What was most surprising for fans, and in turn, heartbreaking for Vettel was that despite a better race-pace all weekend, Sebastian Vettel and his teammate weren’t able to hold the Silver Arrows by the scruff of the neck.
With 8 races to go, but having believably enjoyed a much-needed break, racing will resume at Spa-Francorchamps, where Hamilton has ruled with an iron fist given his prominence over the years.

Can Vettel win at Spa?


To resume his charge on the man who holds track position of 2018 World Championship- at this point in time- Vettel would want nothing more than a grand win at the middle of the enchanting beauty of the Ardennes, Belgium.
In a sport, so embedded in thrill and the constant shuffling momentum that rests with a driver a second only to move away from the very next, you’d be pragmatic to not denounce Vettel, who’s a different animal when driving at his pomp.
But eventually, it may all boil down to who keeps the cool under intense pressure? Lights out, and away with go. Forza Seb!
Previous articleDanger-man Andre Russell wastes no time in announcing his mighty comeback
Next articleHas Limited-overs Cricket Affected KL Rahul’s Test Approach?