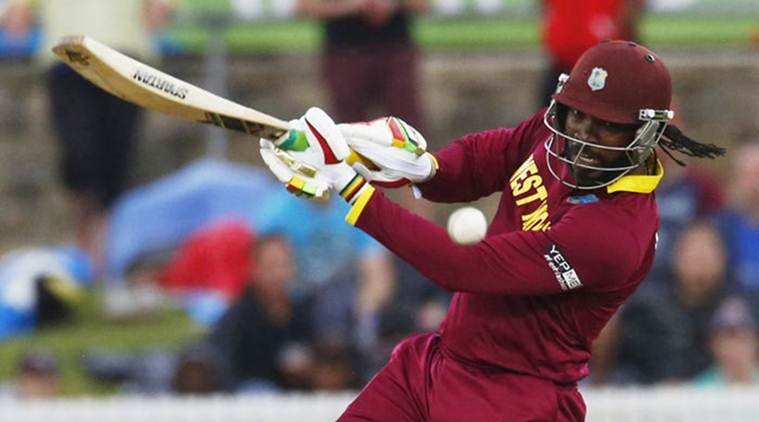 Will the fans witness Gayle storm ? (Image: The Indian Express)

Why does it happen that Chris Gayle is often on the cusp of a landmark?

Scaling a peak in Chris Gayle’s world is about as normal as a regular day spent at the office.

In early 2018, playing the final T20 versus New Zealand, Gayle featured in his 500th appearance for West Indies.

That was a mammoth landmark.

Currently, he’s only behind Brian Lara for most ODI runs for the West Indies.

At 9585 runs, he’s less than 500 runs from reaching his greatest batting landmark. At the same time, Chris Gayle is ahead of stalwarts of the Caribbean game- Sir Viv, Clive Lloyd, Shiv Chanderpaul.

But here’s what we forget about Gayle, who’s an adjective of big sixes.

Gayle’s been creating landmarks for others to scale for a long time now.

He was the only batsman to score a hundred in the maiden run of World T20.

Wisden Trophy to be replaced by Richards-Botham Trophy

It was when Kohli, Root, Williamson and Holder weren’t born into the sport.

For any cricketer, scoring a Test triple hundred is a truly magnificent feat. Gayle’s the only batsman in contemporary cricket to strike a double at this one.

Would you call this any less extraordinary than his previous feats?

Interestingly, in less than a quarter year, Chris Gayle will turn 39.

For a batsman who’s endured a sore back, globe-trotted for nearly a decade to hit fiery sixes with the problem, it’s indicative of landmark longevity.

No other batsman to this day holds the rare distinction of striking a six of the maiden ball of a Test.

No other West Indies batsman has struck a 150 in Tests, upon a return into the squad, having missed nearly a year and a half of cricket.

Rewind the clocks back to 2012- New Zealand was struck by Gayle-storm.

But that told, is Chris Gayle a formidable power today?

The Calypso king was a pivotal figure in a set-up battling minnows at the ICC World Cup qualifiers.

This is regardless of his bat seeming rather subdued as seen in both Afghanistan encounters, PNG and even Scotland.

Gayle suddenly seemed vulnerable to short-pitched bowling, usually plucking it away for massive blows- his usual mode of operation.

There’d be no Gayle-storm in 2018’s most important ODI series for the West Indies. Yet, he managed to chip away with an effortless hundred, bringing up a decisive ton against the UAE, his 23rd overall.

Lara, Samuels, Bravo all have lesser tons in the limited overs format.

So it’s obviously silly to doubt someone who has 17000 runs, considering both formats.

But the behemoth we have in the middle does not seem to have the elan he once did.

In 2018- he’s had six opportunities to plunder runs. He’s managed 165 without a single fifty. Had the ton against UAE not had happened, we’ve to contend with a dismal year for the Jamaican.

He played exactly the same number of innings the previous year, but managed 199 runs. For a top order batsman who’s made a name blasting attacks, these are ordinary numbers.

It didn’t help his cause that he didn’t play a single ODI in 2016, all thanks to differences with selectors.

If you saw the manner in which Gayle departed in the final T20, Tim Southee pitching in a massively short ball that clipped his gloves and went into Phillps’ hands, you saw Gayle’s feet not moving and his position rather fidgety. Having failed in the ODIs earlier, his best score from T20s was 12.

Is that really Gayle?

But anyone can have an off-series. Kohli’s had in the last time he visited England in Tests. So did Pujara. Amla is having a disastrous tour to Sri Lanka.

But what sets these batsmen apart is that they have that thing called footwork.

Gayle should be feted with lavish praise for scoring what he has with a footwork no coaching manual approves.

Technical proficiency has never been his forte.

Nor is he the best exponent of playing the sweep. An opportunity for Gayle to continue his plum form of IPL was to have scored massively in Global Canada T20s.

The result? He flopped. He managed 10 from the final 2 games, his highest score was a breezy 63. It didn’t send shockwaves down the bowlers’ spine.

If the ball is there to be hit, Gayle will oblige.

But whether he can do so repetitively today is doubtful. He’s never had the fastest of reflexes anyways so the question of running for 2s and 3s is a Jurassic occurrence for this beast with the bat.

But what that does, is that a dot ball or two and the lack of singles self-imposes the pressure to erupt with a big shot.

In there rests the risk of being caught in the outfield.

Now that there’s no Samuels against Bangladesh, Gayle’s chance to tell the spectator that he still has it in him.

But while Gayle will try what he can, it’ll be sensible for the other folks to step up. There’s little doubt about Hetmyer and Rovman Powell.

But they should not burden an ageing Gayle too much.

Tags: Chris Gayle back in West Indies ODI squadGayle's form in 2018Gayle's out of form
Share31Tweet1SendShareSend

Wisden Trophy to be replaced by Richards-Botham Trophy