These records are still away from ‘King Kohli’ 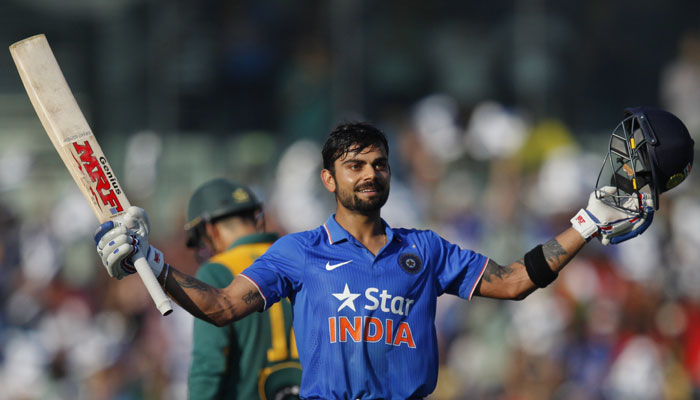 Virat Kohli is considered the world’s most dangerous batsman in the current round. His bat is constantly spewing the ball.

Against Pakistan, they played a wonderful innings of 77 runs against the ICC World Cup 2019.

During this time, Kohli also made his record of making the fastest 11,000 runs.

The names of Kohli are more than one record, but there are eight records that are still far from the reach of Virat.

Virat Kohli has played 230 ODI matches so far. In eight of these innings, he did not get a chance to bat, he has touched 11020 thousand runs in 222 innings remaining.

1. The mountain of runs must be crossed

Virat Kohli has crossed the 11,000-run mark in 222 innings of 230 matches. Now everybody will expect them to leave behind the figures of great batsman Sachin Tendulkar’s 18426 runs.

Sachin has scored this mountain of runs in 452 innings of 463 matches. However, Virat Kohli has played less than half the match and Pariya, till now.

And to reach this figure, they need only a few more runs than seven thousand. The fastest runs that are going to be scored will be touching quite a bit.

Sachin Tendulkar has the record of 49 centuries in ODI cricket. Virat Kohli is fast following this record.

The manner in which his bat is tossing a run and a hundred, it seems to him that he will soon root the fifties of these centuries.

In the case of centuries, Virat is second with 41 centuries. Hashim Amla 27, Chris Gayle 25 and Rohit Sharma are quite behind with 24 centuries.

Virat Kohli has scored 4300 runs as captain In this case he has a record of Ricky Ponting, which he would like to leave behind.

Ricky Ponting captained Australia for a total of 322 ODIs and won 219. During this time he scored 8,497 runs.

As a captain, Virat has played just 71 ODIs so far, it is not difficult for Kohli to break Ponting’s record.

However, in the matter of making the most runs in the captaincy, Indian legends like Sourav Ganguly and MS Dhoni are still ahead of them.

4. Most Man of the Match

Virat Kohli has been Man of the Match for 32 times in 222 innings played so far. In this case too, he will make every effort to overtake Sachin Tendulkar, Lord of Cricket.

By the way Virat Kohli has the power to win the match on his own, it seems that in the coming days, he will surpass Sachin Tendulkar’s record of 67 Man of the Match.

This is Virat Kohli’s third World Cup. It was part of the 2011 World Winner team. He also played the captaincy of Captain Cool Dhoni in the 2015 Cricket World Cup.

Overall, in the three world cup, his name is 764 runs. Although there are still plenty of matches left in the ICC World Cup in 2019, where Kohli can easily cross the 1,000-run mark.

Apart from this, the World Cup of the year 2023 is to be played in India, if Kohli remains fit and by runs at that pace, then Sachin can leave the record of 2278 runs in the World Cup.