Jimmy Murphy's influence on Manchester United is still seen in the way the club give young players an opportunity and the emphasis they put on nurturing academy talents. 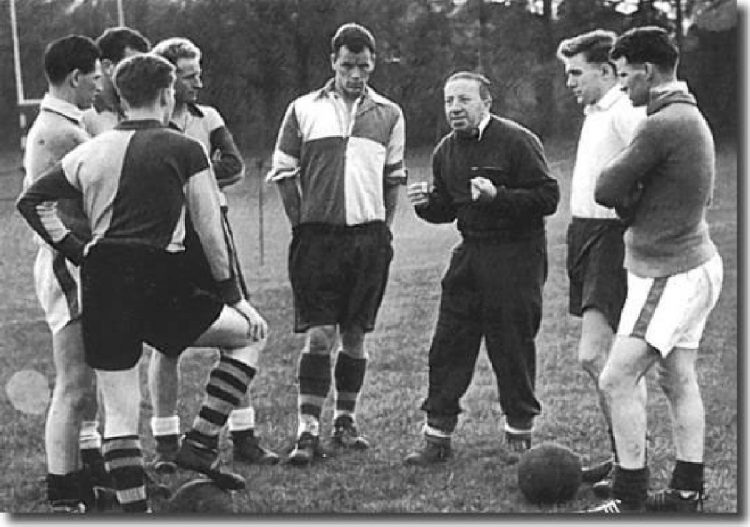 Jimmy Murphy in his elements on the training ground. (Image Credits: Twitter)

But there has been a recent clamour to immortalize another important figure of Manchester United’s history in Jimmy Murphy with a statue outside the Theatre of Dreams.

The modern Manchester United were built on the burning embers of a crashed aeroplane on the icy tracks of Munich airport on 6th February 1958. The Munich air disaster and the following rise of the club from the ashes have been well chronicled.

Matt Busby’s young side were destroyed in that disaster with eight first-team players losing their lives and all but Busby of the first team coaching set-up survived the crash.

Busby’s trusted lieutenant Jimmy Murphy was not part of the journey for the European clash against Red Star Belgrade as he was managing Wales in their World Cup qualifiers.

The Welshman turned out to be one of the most important figures at the club as he was left with remnants of a destroyed team with the surviving players shell-shocked by the experience of watching their team-mates die.

With Busby recovering in a hospital bed in Munich, Murphy took charge of a club in shock and held the reins until the manager was fit and healthy to return.

The Artist who saved Manchester United

Jimmy Murphy was an artist, he played the organ and the piano other than being a talented footballer who played for West Brom and Swindon Town and represented the Welsh national team who he later managed between 1956 and 1964. His playing career was cut short by the Second World War.

During the war, he was stationed in Italy as a sergeant and he organised troop’s sports games and coaching clinics in football. It is during his time in Bari, Italy, where Busby spotted Murphy giving a speech to the troops about football.

The soon-to-be-Manchester United manager took him under his wings and offered him the youth coach role at Old Trafford when he took charge of the club in February 1945.

Busby and Murphy formed a partnership that lasted three decades and turned Manchester United from a middling team in England to a buccaneering force in domestic and European football. The Welshman played a massive role in helping Busby set up an academy structure that formed the core of the great Manchester United sides to come.

Murphy moulded the young players such as Bobby Charlton, Duncan Edwards and Roger Byrne who went on to become the core of the ‘Busby Babes’.

The young Manchester United side enthralled everyone in the 1950s and were set to face Real Madrid in the European Cup semi-final when tragedy struck in Munich.

The Munich air disaster is a monumental event in Manchester United history not only because of the lives lost but the way it ended the march of one of the exciting young teams of the club’s history. The squad had flair, skill and were dominating the English game before eight first-team players lost their lives in Germany.

It is almost impossible to comprehend how Manchester United survived the disaster as they neither had the financial resources or the vast pool of talent that would have come in handy.

In February 1958, Busby was fighting for his life in Munich and Manchester United were on the verge of oblivion with the board considering shutting shop as they felt that they had no way to take the club forward after such a disaster.

However, it was Murphy and a cohort of young, inexperienced, nervous but ultimately, talented players that saved Manchester United from becoming irrelevant. The Welshman’s sheer determination, motivation and strength of character to carry on, if only for the memory of the ones who perished, that kept Manchester United standing during those trying months of 1958.

Jimmy Murphy fought the board, called up clubs for players and trialled a plethora of young players on the training pitch to build a team fit enough to represent Manchester United. He cajoled Bobby Charlton back on to the pitch as the then young midfielder struggled to cope with the death of team-mates.

Results didn’t matter as Manchester United were fighting for survival but they still made it to the FA Cup final where Murphy led the side out at Wembley against Bolton Wanderers.

He kept the club floating for Busby to come in and take charge of the club’s rebuild alongside Murphy and they went on to the win the European Cup ten years later in 1958.

The media building is named after the Welshman and Manchester United’s academy starlets fight for the Jimmy Murphy Young Player of the Year award at the end of every season. But for the wide world, Murphy’s role in building the modern Manchester United is relatively unknown.

Busby is the mythical figure in Manchester United’ history, the man who survive Munich and built a team that won the European Cup just ten years later.

But without Murphy, Busby would not have achieved half of what he did at Old Trafford. The Welshman was instrumental in the success prior to and post-Munich. He is a pivotal figure for everything the club stand for today – he youth structure and the tradition of giving young talented players an opportunity to play in the first team.

Jimmy Murphy scoured the land for young British players and never shied away from taking a chance on a youngster, the tradition that is now woven into Manchester United’s myth and story. Despite the high profile signings, the club have had a youth team player in every matchday squad since 1937.

The number of players the Welshman spotted, nurtured and ultimately made them into stars is remarkable. It particularly stands out in the modern world where vast resources are spent on the academy and fortunes are paid to attract the best teenagers of world football.

Murphy had a car to drive around the UK and a remarkable eye for talent – that is it. Sir Bobby Charlton has conceded that Murphy was the greatest teacher and influencer of his playing career.

It is time we get a statue for him outside Old Trafford.