July 14, 2019 saw an epic World Cup final between England and New Zealand at Lord’s that ended in a tie while the Wimbledon final between Novak Djokovic and Roger Federer was only settled by a tie-breaker. 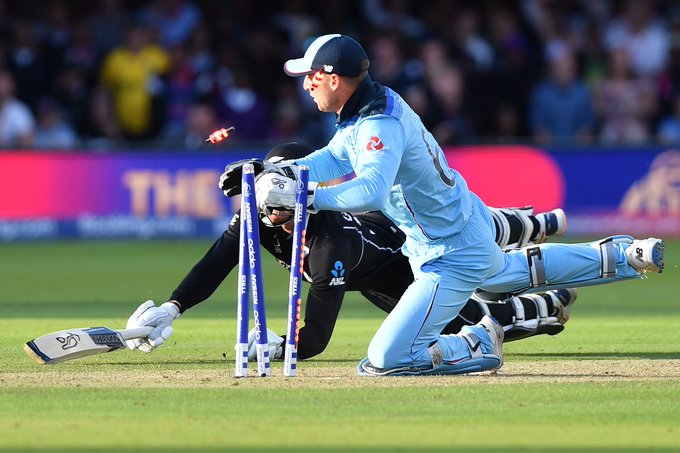 England won the World Cup for the first time in dramatic circumstances as the final was tied and Eoin Morgan's team won on superior boundary count. (Credits: Twitter)

One team did not win but the other did not lose. Another contest was decided only by a tie-breaker. Two mega events in the same city, on the same date and had an unbelievable ending.

It was an ending which redefined the dynamics of an epic duel. It was gladiatorial. It was heartbreaking. It was pulsating.

At the end of the day, the two events made July 14, 2019 one of the greatest sporting days in the history of humankind.

The England vs New Zealand ICC Cricket World Cup final at Lord’s and the Wimbledon final between Roger Federer and Novak Djokovic were two sporting moments that will be remembered for a very long time only because of the sheer thrill and the spellbinding aftermath of the results.

In 44 years of the ICC World Cup, both England and New Zealand were perennial underachievers.

England, the three-time losing finalists were up against New Zealand, forever tagged dark horses but punching above their weight in the World Cups. On that day in Lord’s, both teams put on a performance that changed the face of cricket.

New Zealand had made 241/8 and they had England on the ropes early.

At that moment, came an individual who had already established himself as a game-changer. Born in Christchurch but playing against his home country, Ben Stokes would go on and change English cricket totally with his knock of 84.

His partnerships with Jos Buttler and the tail kept England in the hunt. With 15 runs needed in the final over, it was carnage.

Stokes swung the third ball bowled by Trent Boult for a six but the fourth ball generated controversy. Stokes took off for a couple when Martin Guptill fired the throw at the striker’s end. Stokes dived but the ball hit the bat and went away for four overthrows.

Six runs were given when in actuality, umpire Kumar Dharmasena made an error which he would later admit. Three runs were needed off two balls. Two run-outs later, the match ended in a tie. For the first time, a Super Over was used to break the stalemate.

England made 15. In stepped Jofra Archer, playing in his first major tournament. That too in a final. That too at Lord’s. That too in such a situation. Stokes, who had kept the contest alive, told Archer, “Whatever happens will not define you.”

New Zealand refused to die down. Two runs were needed off the last ball.

Guptill came back for the second but in a reverse twist of fate, he was caught short and at 7:35 PM, in bright sunshine at the venue, England were awarded the title due to superior boundary count.

No one could have even imagined in their wildest dreams that such a finish would take place.

The poise and admiration shown by Kane Williamson was exemplary.

Any other team would have raised a massive controversy but not New Zealand. The outrage over the nature of the result saw the MCC scrapping the superior boundary count rule.

Side by side, with the match at Lord’s emerging into a thriller, the Wimbledon match between Federer and Djokovic was already becoming an epic.

Federer had been on the receiving end of a similar dream match in 2008 when Rafael Nadal defeated him in five epic sets to win the title. Here, Federer was gunning for his ninth Wimbledon title.

In this edition, if the players reached 12-12, the match would be decided by a Super tiebreak.

Djokovic had won the first and third sets by tiebreakers while Federer won the second and fourth sets comfortably. The stage was set. At 8-7, Federer had two match points but he botched both of them and Djokovic held on.

Both players refused to yield. Djokovic’s bloody mindedness and perseverance to get the better of Federer was on show that day. With both players tied 12-12, Djokovic raised his game and won the tiebreaker 7-3.

Two world events in the same city changed the face of sport forever. July 14 will forever be remembered as the day two unbelievable events forever changed the definition of sporting epics and pushed humans to extremities of emotion.