As James Rodriguez inches closer to a move to Everton, we take a look at three of his best Real Madrid moments. 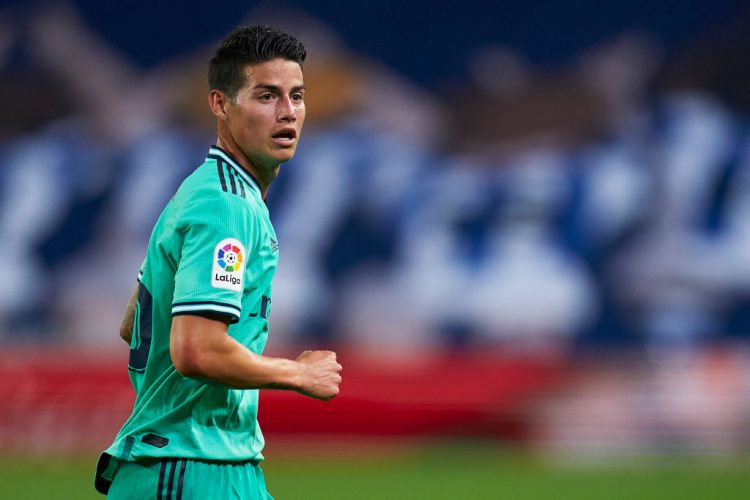 Just after the 2014 FIFA World Cup, when James Rodriguez was revealed as Real Madrid’s latest ‘Galactico,’ not many would’ve predicted such a somber goodbye.

That year, the Colombia international had the world at his feet. Now, he’s set to embark upon a new journey at mid-table Premier League club, Everton, hoping to find some of the magic he used to be known for.

When Los Blancos splurged to get the former Monaco man on their books, James Rodriguez was the hottest name on the market. He had the skill, he had the looks, and he allowed Real Madrid to unlock a potentially untapped market — Colombia.

In terms of jersey sales, he was making Cristiano Ronaldo blush. Sadly, his on-field exploits didn’t extend beyond his explosive first season.

As per reports, James Rodriguez is only a couple of steps away from joining Everton, where he’ll have the full backing of his ex-coach Carlo Ancelotti, under whom he enjoyed the best season of his professional career.

Their last spell together didn’t bid well for either, but with the right expectations and luck on its side, the duo can surely work some magic.

Before seeing James Rodriguez in changed strips, let’s take a look back at his Real Madrid career and relive three moments which gave us a glimpse of the Colombian’s magic.

In the 2014 World Cup, James Rodriguez’s wonder-volley against Uruguay kept everyone buzzing for days. Even the kids who didn’t have a clue who James Rodriguez was kept watching the masterstroke over and over again, drinking it all in.

Real Madrid president, Florentino Perez, was also one amongst the millions left spellbound by the Colombian, which arguably led to the record-breaking transfer.

James Rodriguez played his best football in his debut season in the Spanish capital. Then-Real Madrid coach Carlo Ancelotti gave James his preferred number 10 position, and he made every second count.

On La Liga matchday 34, against Almeria, the world got to see another extraordinary volley from the Colombian’s left foot. He anticipated the ball well out of the penalty area and hit it first-time to leave the Almeria stopper for dead. Real Madrid won the match 3-0.

After Zinedine Zidane’s arrival in the 2015-16 campaign, James Rodriguez lost his place in the team. But under his predecessor, Rafa Benitez, the Colombian got a little time to prove his worth.

Of course, the player always had a knack for the spectacular, but his flair was never as evident as it was against Betis on matchday two of the season.

The midfielder started the match on the right-wing but was practically all over the pitch. He played one-twos, dropped deep to collect the ball, and, of course, pushed forward whenever needed.

He also scored two fantastic goals — an overhead kick and a free-kick — and provided an inch-perfect assist to lead Real Madrid to an emphatic 5-0 win.

El Clasico is by far the most decorated contest in Spanish football. Laden with superstars and backed by a bitter history, this match always promises more than three points. It’s always about bragging rights and more.

In October 2014, James Rodriguez took part in his first-ever Clasico. Barcelona, thanks to their unyielding quality in front of goal, scored the opener through Neymar, but Real Madrid weren’t willing to go down without a fight.

Thanks to Rodriguez and company, Real Madrid regained control of the midfield and pushed Barcelona out of play in the second half.

The Colombian, despite taking his time, grew stronger and stronger as the match progressed and finished the game as one of the standout performers. He capped his night off with a well-timed assist to Karim Benzema. Real Madrid beat Barcelona 3-1 on the night.