Manchester United and Leeds United will be facing each other in the Premier League after a gap of 16 years next season. So, here's a small compilation of classic Premier League encounters between the two teams. 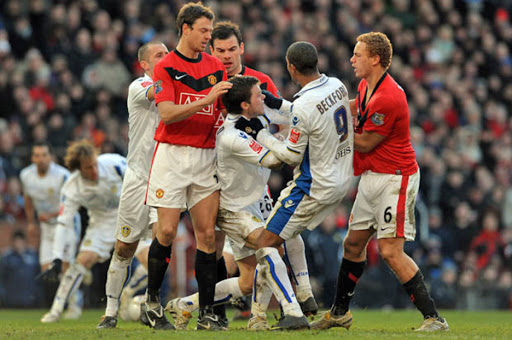 The age-old rivalry between Manchester United and Leeds United will be renewed in the upcoming season after the Whites returned to the Premier League after a gap of 16 years, following their Championship triumph in 2019-20.

The two clubs have a lot of shared history, with their meetings always proving eventful. The much-anticipated contests between Manchester United and Leeds United encountered a halt due to the latter’s long spell away from the English top-flight.

But now, the time has come to revitalize one of the classic fixtures of English football.

So, ahead of the next season, here are some of the most memorable matches between Manchester United and Leeds United in the Premier League era.

The 2001-02 season was not the best for Manchester United under Sir Alex Ferguson as the Red Devils finished third in the Premier League behind Arsenal and Liverpool.

However, Manchester United produced an inspiring display at Elland Road and won 3-4 to keep the bragging rights with themselves. Paul Scholes fired the Red Devils in front within the opening eight minutes, before Mark Viduka pulled Leeds back into the game soon after.

Ole Gunnar Solskjaer then put Manchester United in cruise control, scoring two quick-fire goals within two minutes to give the visitors a 3-1 lead going into the half-time break.

The Red Devils scored their fourth after the restart, with Ryan Giggs sweeping home a David Beckham cross to make it 4-1.

Although Leeds United scored two consolation goals, it was not enough as Manchester United held out for a 4-3 win.

The 1998-99 season was a historic one for Manchester United as they became the only English team till date to win the historic treble of the FA Cup, the Champions League, and the Premier League.

The season saw Manchester United come up with many memorable victories and the triumph over Leeds United is certainly up there.

Leeds came to Old Trafford looking for their first win at the Theatre of Dreams in almost six years and started brilliantly as Jimmy Floyd Hasselbaink gave them the lead.

However, the Red Devils fought back as they turned it around through goals from Ole Gunnar Solskjaer and Roy Keane either side of half time.

The fantastic win proved crucial for Manchester United at the end of the season as they won the Premier League by a solitary point to secure a third of their historic treble.

In the 1994-95 campaign, Leeds United secured their first Premier League win over the Red Devils in September 1994.

The win came at a time when Leeds United were starting to fade away after winning the English First Division title a few years back, while Manchester United were becoming a force to be reckoned with in the English top-flight.

Having drawn two and lost two at the hands of Sir Alex Ferguson’s side, the Whites were under immense pressure to come out on top at Elland Road against their arch-rivals.

Leeds United got off to a brilliant start on that particular day as defender David Wetherall put them in front against the reigning champions with a scrappy finish.

Substitute, Brian Deane doubled Leeds United’s advantage at the start of the second half, sweeping home from close range to put the hosts in control.

Although United pulled one back through an Eric Cantona penalty, it was not enough for Ferguson’s men as they fell to their first defeat of the league season.

Also Read: Liverpool: Was the Premier League triumph one-off or can Reds win it again next season?