All you need to know about the biggest deals that happened on the final day of the transfer window this summer. 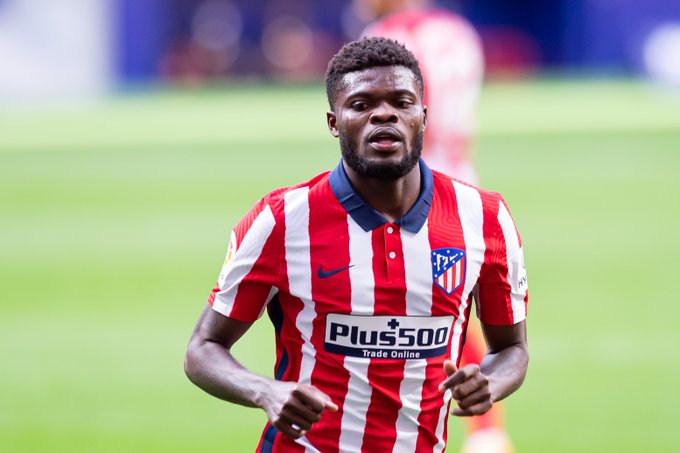 The international transfer window slammed shut last night following another spending spree from some of the biggest clubs in the world.

The unprecedented nature of the window coupled with the uncertainty around football’s finances forced clubs to rethink twice before committing to huge fees but still, deals were pushed through, huge contracts were offered and agents made a killing on the final day of the window.

On deadline day, some expected deals were completed but some came right out of the blue and shocked many.

Here are some notable moves that happened on the final day of the window as clubs scrambled to sign and offload players.

Arsenal’s need to bring in a midfielder seemed doomed when deadline day started. Houssem Aouar vowed to stay at Lyon for one more season and Chelsea were never going to sell Jorginho to their London rivals.

However, midway through the day, it emerged that Arsenal were finally prepared to trigger the €50m release clause in Thomas Partey’s Atletico Madrid contract. The news came as a shock for the Spanish giants who were expecting to keep hold of the player beyond the end of the window.

Arsenal deposited the full fee to La Liga’s offices and Thomas Partey’s contract at Atletico Madrid was unilaterally terminated from the player’s end. The midfielder underwent a medical in Madrid itself and Arsenal completed all the paperwork needed to push through the transfer with only an hour left in the window.

Atletico Madrid were left seething with anger at Arsenal and the player but the Gunners got the man they wanted on deadline day.

Roma were trying to sign the defender on a permanent deal from Manchester United for close to nine months but it all came down to an agreement on deadline day.

The deal was on and off throughout the day as Manchester United continue to stick to their demand of getting €20m from Chris Smalling’s departure.

The Serie A giants finally caved in and agreed to pay an upfront fee of €15m and another €5m in add-ons to satisfy Manchester United’s financial demands. They had a three-year contract agreed with the player but there were fears that a deal might still fail through due to lack of time.

But Roma managed to file all relevant paperwork just a minute before the Italian window closed and Smalling returned to the Stadio Olimpico on a permanent deal on deadline day.

The teenage winger has only played 20 odd minutes in Serie A for Atalanta but is considered as one of the brightest young prospects in world football at the moment. Until the morning of the deadline day, Amad Diallo was scheduled to join Parma on loan and the club had already announced his capture.

But Atalanta informed Parma on Monday morning that they would not be letting their player join them as they had an agreement in place with Manchester United.

The Premier League giants have been tracking the youngster for four years and have agreed to pay a whopping fee of €25m and another €15m to agree on a deal for Traore. Work permit issues mean the youngster is only likely to join Manchester United in January.

The Red Devils believe that they have managed to book a deal for a player just ahead of him possibly exploding in Serie A this season.

The deal was agreed between Porto and Manchester United over the weekend and the contractual terms were in place as well.

Alex Telles travelled to Manchester United on Monday morning and underwent a medical before signing a four-year contract with the Red Devils with an option of another year.

The negotiations for this transfer dragged on for weeks as well as Manchester United were not willing to meet Porto’s €25m asking price for a player who will be available on a free transfer just eight months later.

And the Red Devils got their way as Porto agreed to sell him for a fee of €15m plus performance-based add-ons on deadline day.

Manchester United have been tracking the winger for more than a year and Ole Gunnar Solskjaer spoke to his ex-team-mate and former Penarol manager Diego Forlan earlier in the year to know more about the 18-year-old Uruguayan.

But last week Lyon believed that they had a deal in place with Penarol to sign Facundo Pellistri and the winger was expected to travel to France after Thursday. However, their plans were thrown out of the window when Manchester United made a late approach for the youngster.

They convinced the player to move to England with a six-year contract on his table and triggered the €10m release clause on his contract on Monday. Pellistri underwent a medical in Uruguay on deadline day and Manchester United managed to file all the paperwork needed to confirm his transfer on deadline day.

Despite his age and lack of experience of playing in Europe, Pellistri will be drafted straight into Manchester United’s first team set up in the coming days.

Another deal that was agreed over the weekend, Everton managed to get it over the line on deadline day.

Carlo Ancelotti wanted to sign a defender before the window slammed shut and after considering options from across Europe, they zeroed in on Ben Godfrey and managed to find an agreement with Norwich for a fee of £30m.

The 22-year-old centre-back travelled to Merseyside over the weekend and underwent a medical before Everton confirmed his arrival on deadline day.

After failing to sign Daniel James from Manchester United, Leeds United made a late move for the Brazilian winger over the weekend. Rennes were taken aback by the late interested in their player but agreed to sell him for a fee of €20m.

Raphinha arrived in England on Monday and underwent a medical before Leeds confirmed his signature on a four-year deal.

Marcelo Bielsa wanted one more winger added to his squad before the window slammed shut and Leeds delivered on their promise on deadline day.

Players moving from Fiorentina to Juventus are rare and it is always news when one crosses this hated bridge between these two Italian rivals. Juventus managed to work out an agreement with Fiorentina to sign Federico Chiesa on a two-year loan with an option to buy.

The negotiations were fraught but Juventus flexed their financial muscle and signed Fiorentina’s best player on deadline day.

La Viola insisted all summer that the winger would not be sold but they finally caved in. The structure of the deal also worked out for Juventus who are dealing with the financial implications of the COVID-19 pandemic.

Ole Gunnar Solskjaer was on the lookout for a striker to bolster his attacking options and Manchester United signed the 33-year-old Edinson Cavani on a free transfer on deadline day.

The forward was on the lookout for a new club after leaving Paris Saint-Germain in July and was offered to the biggest clubs in Europe throughout the summer. A move to Atletico Madrid failed through as the Spanish giants didn’t manage to offload Diego Costa.

Manchester United finally signed him on a one-year deal with an option for another year. A striker of real pedigree, the club are hopeful that Cavani’s experience will come in handy over the course of the season.

But the 33-year-old has not played for seven months and with Anthony Martial picking up a three-match ban, the club will hope to get him in shape to make his debut against Newcastle United after the international break.