After a fabulous run where she defeated Serena Williams in Quarter, Henin went on to defeat Venus Williams in the semifinals to book a berth for the Grand Final. Justine Henin would go on and defeat Svetlana Kuznetsova in the US Open final to claim her seventh and last major title. 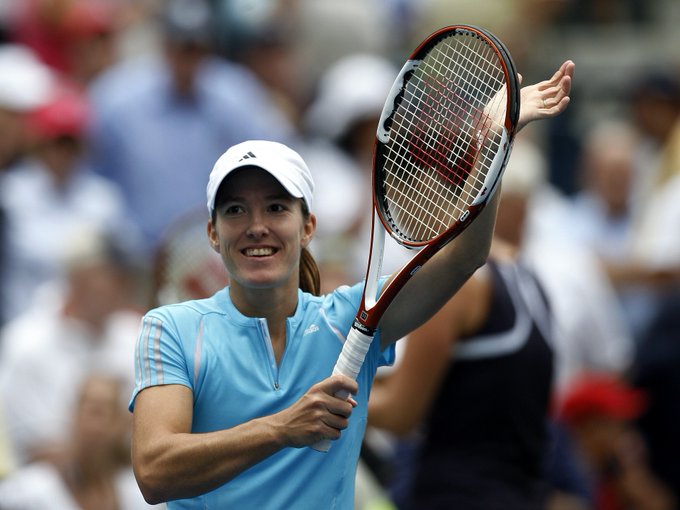 The year 2007 was a phenomenal one for the Belgian Tennis legend, Justine Henin.

After skipping the Australian Open due to personal reason, Henin bounced back strongly and produced one of the best seasons ever by a women’s singles player with an impeccable win-loss record of 63-4.

Henin’s win percentage of 94 was the best until Serena Williams took over in 2013 with a 95% wins on tour.

Only Lucie Safarova, Svetlana Kuznetsova, Marion Bartoli, and Serena Williams were able to defeat the Belgian in 2007 as she won both the French and the US Open.

However, Justine Henin lost to Serena Williams in the Wimbledon semi-final.

Henin was ferocious. Henin was gritty. Henin’s grit on-court was on full display in the the semi-final contest of the US Open against Venus Williams.

Heading into the match, Justine had defeated Serena Williams in the quarters whereas Venus had a three-set thriller against Jelena Jankovic the night before.

With Venus Williams being the only American left in both Men’s and Women’s draw, the crowd, obviously, was strongly behind the senior Williams sister.

Anyone who watched the US Open would agree on how passionate Arthur Ashe stadium would get if an American is on-court. Henin was aware and was not bothered as the only person she would look in the stadium was her coach, Carlos Rodriguez.

Venus Williams started the match with her ‘not-so-gentle serves. The American had the reputation to start slowly, allowing the opponent to pounce on her before getting into the groove.

Justine Henin was quick to realize the sluggishness of Venus in the first game as she broke the American’s serve twice and took the score to 3-0 in no time.

Multiple double faults on serve cost Henin the fourth game and Venus got one of the breaks back. For Venus to stay in contention, the first serves were essential as Henin would attack the second serve of the American with her strong forehand.

It was then the match took a different turn. Henin was 40-15 up in the game and had two set-point opportunities.

One of the on-court attributes of Venus Williams was her ability to play at her absolute best in adverse times during a match. Two brilliant backhand winners took the game to deuce.

Now, the pressure was back on Henin and she gave in to the pressure with a forehand error which resulted in a break-point to Venus Williams.

The crowd immediately got behind the American and as per their wish, Venus broke the Belgian levelling the score to 5-5.

With the crowd involved and Venus back to her roaring best, the next few games were an eye-feast as both women fought hard for every single point.

Deservedly, the first set went to a tie-breaker and it was Henin who drew the first blood with an exquisite forehand passing winner down the line.

A few untimely errors from the American resulted in Henin taking the first set,7-6(2). Both Venus and Henin had decent first serve percentages of 65 and 68 respectively.

Even the number of winners and unforced errors from both the players would indicate the intensity of the contest.

Henin managed to hit 15 winners in comparison to 12 winners from Venus and the unforced errors of the Belgian were 18 and the American made 19 unforced errors.

The first set was a matter of here and there and it was Justine who played the tie-break well to win it.

The story of the second set was similar to that of the first with Venus losing her service game and Henin surging a quick lead of 3-0 before things started to flip around.

One thing Justine Henin did well throughout the match was to attack the second serve of Venus on a regular note.

Before Venus was aiming for a comeback in the match, she couldn’t move properly on-court and was hitting a lot of errors from both the wings – forehand and backhand.

Once again, Justine Henin was in a comfortable position to close the match but Venus recovered quickly to break Henin’s serve and level the score at 3-3.

But, Venus couldn’t maintain the intensity for long as she was unwell and the effect of her long quarter-final match against Jankovic began kicking in as the match progressed.

Even when Henin broke the American’s serve at 3-3 in the second, the latter would level the score once again by breaking back the Belgian’s serve in the immediate game.

This spirit couldn’t continue for long as Venus started to move a bit gingerly owing to fatigue. She lost her service game at 5-4, thereby handing the match to Justine Henin.

Justine Henin would go on and defeat Svetlana Kuznetsova in the final to claim her seventh and last major title.

Her single-handed backhand was right at the top with some of the greats in women’s tennis. Henin announced her retirement in 2008 from the game but made a comeback in 2010 and finally left the game in 2011.

In her comeback, she reached the finals of the Australian Open after being given a wild-card entry into the tournament. Justine Henin came close to winning her 8th major but lost to Serena Williams, 6-4, 3-6, 6-2.

Sagar grew up idolizing Roger Federer and ended up loving the sport more than the man himself.