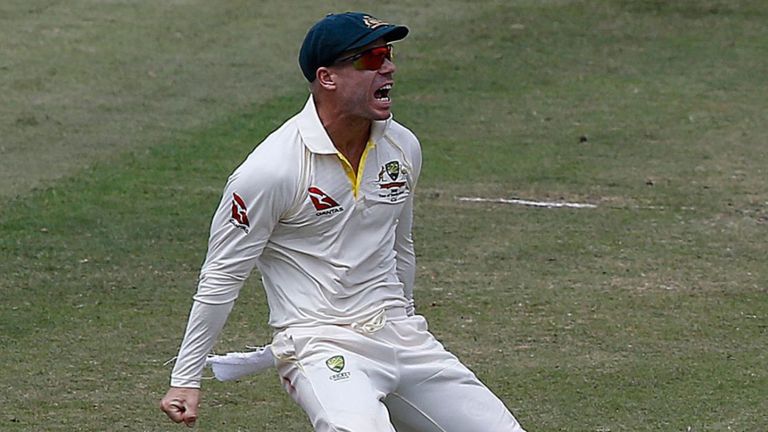 Australia pummelled hosts South Africa by 118 runs to win the first Test at the Kingsmead in Durban on Monday. South Africa were bowled out for 298 with the side adding just five runs in the fifth day. The Aussies take a vital 1-0 lead in the four-match Test series.

Australia picked the final wicket of Quinton de Kock (83) after Josh Hazlewood had him trapped LBW. Mitchell Starc was adjudged the man-of-the-match award for his nine wickets in the first Test match. The gloss of the victory was taken out by the altercation involving David Warner after video footage emerged of the Australian vice captain confronting South Africa’s Quinton de Kock during the tea break on Day Four of the first Test in Durban. Cricket Australia is investigating the matter.

According to reports, it all started with the Aussie vice-captain celebrating the run-out of AB de Villiers in the first session of Day Four on Sunday. But the situation has considerably soured after CCTV footage, published by South African outlet Independent Media, showed Warner and de Kock engaging in a verbal stoush as players made their way to the dressing rooms at tea.
Warner had to be restrained by teammate Usman Khawaja and then dragged away by captain Steve Smith after he did not relent on his barbs at de Kock. South Africa captain Faf du Plessis, draped in a towel, and other South African players became involved in the incident before Warner was escorted away.
“CA is aware of reports of an incident between players in Durban,” a Cricket Australia spokesperson said. “CA is working to establish the facts of what has occurred and will not be commenting further until that has been done.”
Aussies cross the line
Warner’s behaviour was already under the microscope after he sledged opener Aiden Markram in the aftermath of the de Villiers run-out. Markram went on to score 143 runs. Off-spinner Nathan Lyon, has also been scrutinised after dropping the ball next to the sprawled dismissed batsman.
In a fiery performance from the visitors, Mitchell Starc was also notably engaged in heated exchanges with Markram during the day’s play.
Starc in best form of life
Mitchell Starc has been in commanding form as he continued to surge from the Ashes 2017-18 series. After picking 23 wickets against England, he picked nine in the first Test at Durban. His three wickets in a space of five balls on Day Four was a treat as he wiped out the tail after Markram’s dismissal. The fast bowler acknowledged in the post-match conference that he has work to do with the new ball besides being happy with the overall performance.

“Nice to put a few in the right spot. To finish off the Test match like that in four and a bit days was very pleasing. Reversing the ball is going all right. Little bit of work to do with the new ball. As a bowling unit we’ve been doing well,” said Starc.

Proteas batting a let down

The South African batting was a dismal show especially in the first innings and that paved the way for them to go down in the Test series. With catching up to do now, they need their batsmen to come good especially the famed middle order whose bats haven’t done any talking.

Skipper Faf du Plessis pointed out that they need to be more responsible. “Batters need to cash in and take responsibility once they get in. There wasn’t enough partnerships for us. We just didn’t get enough runs in the first innings.